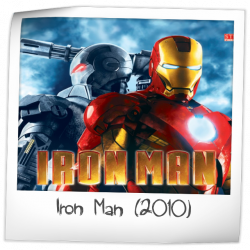 This game ranks 2nd in the game group "Iron Man". The group itself ranks #44 in the Pinside Pinball Top 100.

There are 298 ratings (that include a comment) on this game.
Currently showing results page 9 of 12.

This is a fast, fun game. It can be brutally difficult with the unpredictability of the magnets.

At first, I was worried that the layout was too similar to Austin Powers (identical ramps, toy in the center that comes up from the playfield) etc. Iron Man is a very different experience, though.

The music is great, and the game has a lot of quotes/scenes from the movies. However, I am disappointed with the lack of Tony Stark/Robert Downey Jr quotes. What made the movie GREAT was the awesome quotes from the quick-witted Tony Stark...and almost all of them are missing from the game.

Heck...the pinball should be LOADED with Robert Downey Jr. quotes...and instead, we get a ton of Jeff Bridges. (Don't get me wrong...those quotes are fine, and well done....it's just that I'd rather have Iron Man quotes all over my Iron Man pinball machine (wild, eh?))

I didn't think that I'd like this game after looking at it originally. However, I liked the movies and the pin was open so I gave it a whirl. Wow, what a fast & smooth game! Ended up liking it a lot and wouldn't mind owning a nice example of it in the future.
7.196/10
9 years ago
SMK

Given it a lot of plays and it just seems "flat." Not impressed at all. It's not horrible, but very basic in a not good way. It has speed, so if that impresses you this is the game.

Edit years later: its a bitch burner. Cock kicker. I've grown to respect it more over the years. Can be frustrating but I realize now it's in a good way. Respect is due.

Great theme, great toys. IM is a lot of fun to play several great multiballs. Most popular game we own right now. Music, lighting an backglass are all top of the v
Charts.

IM is all about flow. There are no VUKs or saucers, so the ball never stops. Depth is comparable to T2 and other 90's DMDs. This is no LOTR or TSPP. IM is all about mode and multiball stacking. Where LOTR is like a dance partner, IM is like a sparring partner.

Strategy: beat Iron Monger MB on the first ball, use the second ball to set up the other modes, and then execute all the modes together on the 3rd ball. Try to start double scoring just before the wizard modes. On my best game, I had fast scoring, Bogeys, War Machine and Whiplash multiballs all running at once. It was a huge rush.

swampfire edited previous rating on April 27, 2016.
swampfire has owned this game in the past.

21 Jan 14: This is an update now that I own IMVE. Now that I've got some real play time on it, I have to rate it near the top along with Tron. In fact, at home I alternate playing them lately. I love the fact that any one ball in IM can take you all the way, or humiliate you, sometimes in the same game. I'm increasing my rating score with this update now that I can hear the call outs and music better in a home environment. The LEDs on the vault edition pop as well. I believe that IMVE is the best value of any pin I've ever purchased.

30Apr14: I feel the need to update my rating of Iron Man and up it a bit, as it's grown on me. At the moment it's the only game I've rated that I've never owned, if that tells you anything. It's also presently rated lower than X-Men on pinside which is shocking to me as an original X-Men LE NIB pre-order sucker. Iron Man is a game that I would pay big bucks for if Stern released an LE in the near future. It's one of Stern's best in my opinion.

Iron Man really grows on you. It's always the first game I hit when I visit the PHOF. I'd probably own one if I had more room, or if they came out with an LE version. That leads to my only two complaints: Some of the parts look a little cheap and you can't really earn an extra ball.

Those two aside, IM rocks, literally. It's an awesome game and suprisingly, seems to hold up to play better than I expected. I like the music, magnets, Iron Monger, and most everything about the play. I think this pin has grown on a lot of people. I definitely think it's better than BDK and I'd actually rather own IM than SM.

If there's a modern-day pin that will almost always guarantee a quick game, it's Iron Man. I love the way Borg designed the slings & outlanes (set them wide), just frickin' brutal. Nudging is a must. The rules are surprisingly above average for a Lonnie Ropp game, thanks to assistance from that one guy... oh, what's his name?.... Lyman something? =). The sound package on this game is phenomenal thanks to David Thiel, and it greatly fuels "the rush" you get when playing this beast. Despite the simple layout, there's a variety of things to shoot for (Bogey ramps, Monger, War Machine, Whiplash, etc) with several of those shots resulting in different multiballs. This pin is definitely one of my favorite go-to Sterns.

This game is greater than the sum of its parts. You can find pins with more toys, busier playfields and deeper rules; but somehow the elements add up to a crazy fun machine!!!
7.709/10
9 years ago
TOZ

Not really sure what all the hype is about on IM. Seems very boring and plain to me. PLayfield is very bare, however the game is very fast and I love fast players games.

Iron Man is a super fast game with great modes and sound. Like the Iron monger toy just wish it had more than just that. Hate DMD animation kinda crappy and hard to make out IMO. Still doesnt take away from the awesomeness that is Iron Man

IM is pure balls-to-the-wall adrenaline. If game were available under $4k, it would sit in everybody's home and every bar. It's high price tag is the only knock on an otherwise spectacular and fun game.

Major disappointment. Possible because Iron Man has been my very favorite comic book hero since he got his own comic. The movie was great, couldn't have been better with perfect storyline and terrific casting. I couldn't wait to play the pin. How this has such a high rating, I just don't understand. I found it to be a bit "cold" and "plastic" compared to other pins coming out today. It's only my opinion and apparently many disagree, but this Iron Man is rusty.
4.832/10
9 years ago
RAV

Possibly the worst of the newer Stern pins. Cheap toys abound around the playfield.

I've had several play's on shanetastic's IM.. Rock solid Pin !!~ The Irom Monger that raises is an Excellent Touch,, Whiplash should've been Mod'd Better .. Over-all , I like the Pin.

BLACK_ROSE edited previous rating on April 23, 2013.
BLACK_ROSE has owned this game in the past.

Fast and intense. Just how I like it. Great game. Nice job Stern

I didn't like it at first, but I have grown to really love this game. I really like all the long shots you need to make. It's very satisfying whenever you make one. Great sound too.

A very fast and unforgiving pinball. Similiar to the early SS and EM days. Rules, dots, and art are very good. Game times and scores are low but it keeps you coming back for more.
6.537/10
9 years ago
DMG

Not a big fan, attended one of the launch parties for it, and was underwhelmed. Feels to me like it is missing a flipper on the right side, never had this feeling on a pin before. Won't say it's bad, just nothing stands out for me.

This is a great "in your face" pin. It fights you, and you have to fight back.

This pin has possibly the best sound package of any pin I've heard. Upgrade the speakers and subwoofer! A shaker is also a must have.

I've never played a pin that has a stronger "just one more game" pull than this one. I've found it to be a very addicting pin, and it is one that really does get the blood pumping.

Short ball times, but man is it fun when you get your shots going, and setting up the Do or Die shot never gets old.

RobT edited previous rating on April 12, 2015.
RobT has owned this game in the past.

good lord! this game is fast! many of the newer sterns i have played lately have had long ball times and i felt they are too easy. not iron man. i love this game because it challenges me to really try to be a better player. it has good flow and a good light show. i would own this game any time.
8.184/10
9 years ago
LTW

The problem with Ironman is how cheap it looks. The toys are literally toys, they look like cheap GI Joes you'd buy for your five year old nephew. But that really doesn't hurt the game too too much. When you get right down to it Ironman is just a fun game and I've found myself making countless trips to the movie theatre to play this machine.
PreviousNext123456789101112
There are 298 ratings (that include a comment) on this game. Currently showing results page 9 of 12.