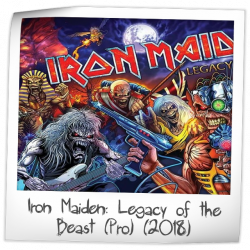 This game ranks 2nd in the game group "Iron Maiden: Legacy of the Beast". The group itself ranks #5 in the Pinside Pinball Top 100.

There are 258 ratings (that include a comment) on this game.
Currently showing results page 1 of 11.

Yeah, this is an awesome pin. If you grown up with iron Maiden, it's even better. Must have

This is a great musical pin, great shots but for me I got tired quickly of the theme and music. One of the best pro pins out there compared to the premium/LE. I would put in my top 50 but not top 10. Will reevaluate when I play longer. But for me right now , mid tier top 50.
9.140/10
4 months ago
RRR

Such a fun shooter with a terrific layout. Only downgrade is the theme as i couldn't care less about Iron Maiden. If only they did this table for The Ramones... Animations are very poor, think PS1 level. Callouts are nothing to write home about either. Also think, this was Zombie Yeti's poorest effort... The art on EHOH for example is lightyears ahead.

The gameplay and code all makes up for it though, fantastic machine.

theadicts77 has owned this game in the past.

What can I say about this machine!? simply wonderful, beautiful art, exciting gameplay, exceptional Iron Maiden sound, nothing to criticize, just buy it and be happy!

Iron Maiden is Keith Elwin's first pinball machine fron Stern and it's a good playing pinball machine.....it has the classic Elwin orbits that we're growing acustomed to seeing in his pinball designs. It's a good effort but the original Iron Maiden ended up becoming Guardians of the Galaxy which I would have preferred more seeing a giant Eddy with his arms around the entire playfield....which became Groot. Overall the ramp shot on this machine feels like Stern could have done more with that design instead of having the ball just drop off the back of the playfield. Also I feel like they could have done a better job with code and intergrating the ruleset to integrate Iron Maiden's albums into the achievements. It was a great effort but I think Stern really rushed this to market and it shows because I don't think they really ever achieved the full potential of what Iron Maiden could have been and I'm a HUGE Iron Maiden fan but this pinball machine is just ok to me.
9.900/10
6 months ago
???

The Beast of the Beast

I absolutely love this machine. Great all around. Ruleset, lighting, lots to shoot at but there some flow to it as well. Love the music too.

Lablaw has this game on the wishlist.

Not really a big fan of this table. There are few musically-themed pinball tables I really enjoy. This one has no lastability. I would get sick quick of these songs if I owned the table. I like Iron Maiden. Just not enough to create a pinball machine out of the band. How about a Gorillaz?

I don't have a large selection of games. Usually just one two. This one will be bolted to the floor. One of Sterns best.

damageinc55 has this game on the wishlist.

Lot's of fun, great music but like all band pins I kind of get tired of the same music after a while. Other than that I found it great. I wouldn't want one for my home though.

I love me some Iron Maiden. There are very many shots to shoot. The most frustrating is the left ramp through the pops and for goodness sake, be careful shooting the loops. There is so much to do I don't think I will ever get to the end of the game. I plan on leaving this machine to my kids -- high score gets to keep it.

I really enjoy the layout of this game. It's feels refreshing. The sheer quantity of shots available on this machine is unmatched. The ramp shot through the pop bumpers is very satisfying. The upper flippers are well utilized and have specific and difficult shots tied to them. Plus, it actually has a bank of drop targets! Stern recently seems to veer away from those in favor of cheaper target banks.

The game is difficult, but ultimately fair. Definitely one I wouldn't mind adding to the collection one day.

I wouldn't consider myself a fan of the music of Iron Maiden, but I also don't hate it. It's one of the better choices made for a band theme.

The artwork is amazing, I do think the playfield art feels less striking that I expect out of Iron Maiden, but you have to love that art style.

Ultimately, this game feels like it's made for true pinball fans. it doesn't rely on clunky toys, and seems to favor shots over gimmicks. It's one of the best machines Stern has ever made.

explosiveegg has this game on the wishlist.

Elwin did another great job. This is a high value for your money on the pro version. I mean, 4 flippers, where else do you get that in a pro? The pop bumpers up front on the left are unique, not my favorite but makes it a unique experience and risky left ramp shot. The loops on third flipper are nice. Fourth flipper is not the best in my opinion. The ramp shot is fun and easy to hit. I would say this game is better suited for newer players but it got pretty repetitive for my and balls were lasting too long. If you took this machine and slapped a better theme on it like AC/DC, I would add to my collection in a heart beat.
10.000/10
11 months ago
TUG

Zombie Yeti and Keith Elwin should team up every time! Awesome looking game and a blast to play. Before playing this game I didn't care one way or another about Iron Maiden but I think the music goes great with pinball and this game in general. Love the layout just wish more of the shots weren't centrally located. I am usually not a fan of four flipper games but this one is an exception. Probably the band I care the least about but is my favorite of the rock pins because of the game itself. I like how the modes are tied to the individual songs but doesn't feel like a typical band themed pin at the same time because the code and game itself is so well done.
9.800/10
11 months ago
NLV

This theme is a huge home run for me. I love Iron Maiden and the songs chosen for this game are a good collection. This playfield is very unique and a shooters paradise. You are punished for missed shots and rewarded for successful ones. The upper flippers enable you to do a repeating loop which is very satisfying. This game just feels so different compared to everything I have been able to play so far. This is a winner and I wish to own it one day.

this might be sterns best game they have ever made.

Bought and played during lockdown. Not sure I could have purchased another single pin that could hold my attention for as long AND make me a better player. I was not a fan of Iron Maiden music before I bought it and it grew on me. I was not a huge fan of the theme but the layout was magnificent.
Next1234567891011
There are 258 ratings (that include a comment) on this game. Currently showing results page 1 of 11.