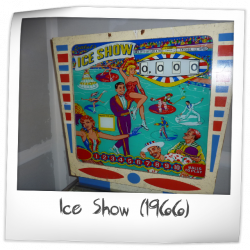 Ice Show is an add-a-ball machine, low production for the Wisconsin and New York markets. Another version of Ice Show was made for the Italian market and featured a different backglass but still had similiar artwork. Ice Review is the replay version.

There are three ways to earn extra balls:

All five thumper bumpers are active and give you some nice action. The two capture-holes award a tidy sum of 100, 200, or 300 whopping points!

The top rollovers light up corresponding pop bumpers for more points. After achieving all five for an extra ball, it resets and three light up for the next award.

The side drain rollovers correspond to the side targets 1 thru 6. Making all requires quite a bit of nudging and body English! Unless of course your aim is extra good for the long shot targets up towards the top.

Even though there are three ways to add balls, it is still one of the more difficult add-a-ball games. Any score over 5,000 points is an achievement. Even though I've had this game for several years I still haven't rolled it over, unlike 70's games where I can usually do this within a day.

The artwork is typical Roy Parker. What's with the creepy clown on ice skates? I always wondered if there was some popular movie tie in for the Ice Show/Review series of pinballs. Maybe this is a tribute to the popular Sonya Henie of the thirties? 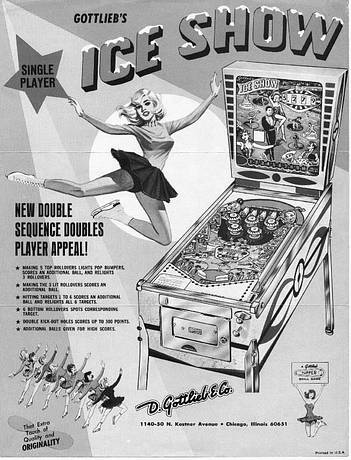 10 Pinsiders have this game in their collections.

We have seen this game for sale in the Pinside Market 2 times. The average asking price is $588