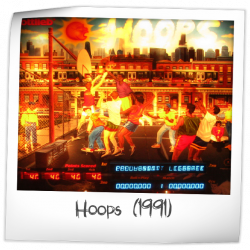 This game has received 16 approved Pinsider ratings. 9 more approved ratings are needed to get a rating and for it to be eligible for the Pinside Pinball Top 100 ranking.

Hoops is a machine at a location near me that I walked past at first, because it just doesn't stand out, especially when it's put in direct sunlight. The theme has a generic "circa 1990 street-baller" aesthetic, the playfield is plain, and the backglass art isn't instantly striking. There are a lot of things that combine to make it obviously dated, some 30 years on. But once I read up on the "street level" games, I got past those reservations and gave it a proper go, and found that I wanted to come back to it.

It's like comfort food pinball - just straight-up fun to play and easy to follow, a good representation of what Premier was going for at the time, with standard playfield elements and straightforward rules that give the gameplay a timeless quality. The space left over from no toys or ramps is pure playfield space, used for more targets, lamps and contours - which gives it a spacious look, almost the polar opposite of a WMS contemporary like BOP or Hurricane where the space usage leads to a crowded, low-visibility top-of-playfield - an aesthetic that I've always had trouble appreciating. And the low-maintenance nature of being a "street level" game is overall a good thing as a location player - less risk of feeling robbed by the game for reasons beyond your control. All the "bads" of being under-produced for its era are also "goods" for the game's focus, clarity, and reliability. The breakbeat music track is appropriately funky, and I even found that the art started growing on me - the style might be dated, but it's full of little details.

I would say that the vocal callouts are overused, though: hearing "SHOOT, MAN" and "I'M OPEN" ten times a game is excessive. But if that's the worst I can say about it, there really isn't a lot wrong with the game. It's a simple game that ticks the boxes, which makes it worthwhile and valuable in my book.

A final note, after comparing the location game with virtual and videos: A huge amount of the feel and difficulty of this game can be described in terms of what the left and right kickers do. In many setups they'll tend to kick dead center into the drain, making play nudge-centric, bordering on unplayable given a high slope and no stopper. But if they target the flippers, it works as a fast pass-and-control game, and with a center kick and a bouncy stopper there's a lot of wild balls to be had.

Best Streer level Gottleib just not many available to play, but when I do I keep coming back for more, the shots keep me interested

This game doesn't have any ramps, but it's got a really good layout that makes up for it. There's even a shot up the left of the playfield that brings the ball back to the left flipper. The flippers have a fairly large arc which takes a bit of getting used to, but makes catches easier. The music on this game is one of my favorites. The call outs are pretty silly, but fit the theme well.

curtobi4 has this game on the wishlist.

There are two ways to incorporate a basketball theme into pinball Gameplay (OK, three ways, if you count ignoring basketball, a la Globetrotters -- which I do love, but not for the basketballness):

1. You can stick a hoop on the playfield (or backbox) someplace and try to shoot baskets. (Fastbreak, Space Jam, Shaq Attaq, et alia)

That's the approach all the other BB-themed games in the universe take, in the Gimmick and Toy era.

2. Emulate the "moves" in a basketball game with analogous pinball "moves".

This latter is the approach "Hoops" takes, and it makes it one of the most unusual playfield and rules combination designs of its era.

This is firmly at the end of the solid state / pre-DMD era, so without having to worry about display programming, much, all the action is in the sequencing on the playfield. There's a throwback element to this, with long alleys harkening back to the early 1960's (Ted Zale designs in particular) and the business of mixed saucers at the top. I don't doubt that between the kind of horrible artwork and the lack of ramps or other gizmos (Gottlieb's so-called "Street Level" designs, of which Deadly Weapon is probably the most famous), this was probably a real stinker of a seller, which may account for why I've only ever seen two of these machines, ever. But the pin connoisseur will find much delight if you scratch the surface and play. There's the "Alley Oop", like its basketball analog, a long shot for the pass followed by a short stuff; the "Tip In", a shot requiring a short carom to make a saucer; the "SLAM DUNK" which requires "going deep" on the targets; 'Hang Time' or a continuing bonus for hitting a lot of switches. The game keeps a basketball score and a pinball score, and has two and three ball multiballs ("Fast Break"). Because there are no ramps, there's a huge variety of shots, including a couple of really long ones. The lower playfield may be a bit wasted but that's the price for those long shots.

It's a really unusual game and I wish I could get more of a chance to play it. (Take my relatively low overall rating with a grain of salt because my extreme dislike of the artwork brings down the overall Pinside rating.)
8.728/10
4 years ago
J

This is the best of the street level Gottliebs and one of their best non-em games. The music and sound package is amazing (as most Gottliebs of this era) but it really shines in straight forward yet fast and challenging gameplay. The basket point scoring is a clever implementation of basketball style point accumulation without sacrificing the traditional pinball scoring for it. It's fun to play dollar games for baskets!! Just love this game, way underrated.

What a fun game! Played this at PAPA. Doesn't look like much from the artwork, but the layout is great and I love the scoring, it combines the scoring of NBA fast break (actual baskets) and traditional pinball scoring. Bonus heavy game but I really enjoyed it, played it about 12 times and wanted to come back for more.
3.408/10
8 years ago
CCS

One of the first pins I've owned, even before I got spoiled by all the toys and such from the newer Dmd titles. Even early on it just could not hold my interest. Since then I have grown to like and respect the older "simpler" games, but I really don't have any desire to own or play this one again.

ky-pin has owned this game in the past.

Hoops is another Street series game that has some really interesting shots. Ray Tanzer did a great job with this layout.

The Pros:
Shots everywhere. The tip-in shot is one of the most creative all the way up the PF targets to a saucer that I have ever seen. Alley-oop to the left flipper is a great loop (no ramps allowed!)

The Cons:
The BG is the WORST. Don't those kids know to tie their shoes when they play on the court? Leeettle beeeety blue displays make my eyes hurt.

The Takeaway:
A better game than most will give it credit for. Play one and find out what this game is about. Harlem Globetrotters is still the Basketball/Pinball king in my book.

1
There are 8 ratings (that include a comment) on this game. Currently showing results page 1 of 1.