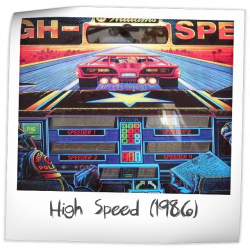 There are 161 ratings (that include a comment) on this game.
Currently showing results page 3 of 7.

This is the game that broke my bank account when it first came out, as I vied to stay on the high score board. It's simpler by modern standards, with the "Getaway" ramp shot being the real money play, along with lit highways. (I owned it but misguidedly sold it when we had to downsize, although I'd frankly played it out by that point.) But in retrospect, this is a really nicely-balanced game, requiring hitting targets, an outhole, ramps, and for high scoring, the inlanes. And when the police radio sound bite comes on, you just get a jones to hit the ramp, and then when the flashing red light comes on on top, it remains a thrill each time to beat the machine and listen to that siren go off. A classic of its era. It's also one of the few non-licensed themed pinball machines with its own sequel, "Getaway", which is also an excellent machine that uses the basic layout and shctick but adds the innovations of dot matrix display and modes. I may yet try to get both of these into my collection again.
7.346/10
4 years ago
MER

HS is one of the best pins of all time. Reviews on PInside have a tendency to forget perspective- so I'll give you some... this game came out in 1986, and in '86 when HS dropped, there was nothing, I mean NOTHING like it. IT truly revolutionized pinball. IT was the very first pin that immersed the player into a "story line" to such an extent. THe music, choreographed light show and sounds were also much ahead of its time. Pinball made an upswing in the Late 80's starting with HS and continuing with games like Taxi.. into the Golden Age as we know it .. the Early 90's. Its a very underrated game. Seek out a good example and put some time into it... pretend its 1986 and , yeah... enough said. Great game and in my top 10 of all time.

chriswhitey edited previous rating on December 14, 2017.
chriswhitey has this game on the wishlist.

Although an older game, the theme and gameplay are really fun. I go back and forth on my opinion of liking this or getaway better. I've owned this in the past and would like to have it again someday.

racecar85 has owned this game in the past.

Good but dated since they made a much superior high speed 2. I wouldn't really give this an edge over anyour DVD game as it doesn't really got much to offer in the way of features. Fun to play time to time
5.791/10
4 years ago
JMS

It's hard not to compare it to Getaway, a much better game. But even ignoring Getaway, this game's highlights are its sounds and music. It tries very hard to get you pumped up about the action, but I personally find the gameplay boring compared to other games of that era.
6.582/10
4 years ago
ROB

Cool game, but suddenly becomes crap once you've tried High Speed 2. Would only get it if I find it really cheap. Design is so-so but as all 80s game this really pops when LEDs are used properly. Theme is nice otherwise, really appeals to me. One of the better 80s machines in my opinion.
8.504/10
5 years ago
JWO

High Speed is a classic. The pace is fast and furious, the goal is clear. It feels great to get multiball after "getting away from the cops". The playfield is only one level, but it feels like more. Since it's a mid-80's design, maintenance is easy. I highly recommend this game for any collection. A Steve Ritchie classic that just begs you for "just one more game".
7.978/10
5 years ago
???

Classic game from Steve Ritchie. Fun to play and a keeper for me.

Love the theme of this game. The play field looks awesome with LED's and has great flow. The call out sound bites rock. The rules don't have much depth, but the shots are not easy (at least for me), can't beat outrunning the cops! My son loves the game, I enjoy the shot difficulty and game play. Wish it had a few more toys, but the tachometer revving with the flipper, the car exhaust lighting behind the back glass and the rotating light on top are cool. The game is fast and fun. Excellent Steve Ritchie design!

The music during gameplay is just unbearable. I would love to own one, but I can't if I have to play with the volume all the way down.
7.229/10
5 years ago
AMK

Decent game for the price, it really pops with leds installed. Fast gameplay, but sounds can get old fast

amkoepfer has owned this game in the past.

Theme granted, drawing unsuccessful, the game does not emotional

High Speed is supposedly the first major pin to tell a story that develops as the game goes on. The problem is, the story is lame, with a vague Smoky and the Bandit type feeling that never really kept me interested. There are so few good shots in the game (besides the upper pf right flipper that hits the raised loop). I don't like games that just bash into stand-ups and never really seem to do much. The upper pf is messy with a saucer and a bunch of pop bumpers hiding behind the mass of stand-ups. I just don't see why most people like this game - even if it does tell a story. I surely wouldn't pay to own this machine, and I can barely make myself play it.

Great Ritchie game. I find it hard to hit the ramp regularly even after 200 plays. High scores are still very satisfying. I love the theme and the design.

canoncitypb edited previous rating on November 12, 2017.
canoncitypb has owned this game in the past.

Got to play this one recently-ish.

Very straightforward, making it up the ramp and getting to multiball after lighting the stoplights is really all there is to this game.

The lightshow is terrific, the obvious forebear of the lightning wheel in black knight 2000 and considering how well that's held up it must have been the most spectacular sight ever back in it's day.

Main theme is lacklustre, i know this is on purpose to add more umphf to the main attraction of the multiball and post jackpot tracks, both of which are very good imo, but really besides being tense it's about as lively as the snoozefest in taxi.

I had a good time with it, fast and rather tricky but surprisingly the outlanes were not wholly unforgiving and the kickback is very neat on this.

Would not want to own this for the price it goes for, despite being instant fun there's just not enough to do on it for my taste.
7.121/10
6 years ago
BDJ

When tuned correctly, the ramp shot feels satisfying, even as a combo from the left orbit. The topper is also neat, simulating a police chase within the game. Music is awesome.
8.296/10
6 years ago
LEX

Just love it, the speed and looping is awesome can repeat all day and night it just has that magic flow!

This game is fast & fun! Great for experienced players or newcomers. I love the call outs

Another classic game, lots of fun and has a great theme. Can see why this made waves when it was released but that passed me by. Only thing that gets a little dull is the music for me!
PreviousNext1234567
There are 161 ratings (that include a comment) on this game. Currently showing results page 3 of 7.