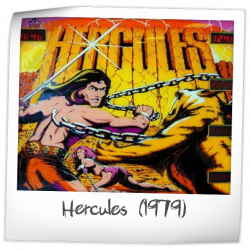 There are 39 ratings (that include a comment) on this game.
Currently showing results page 1 of 2.

First time playing: Wow this is really cool, unique, biggest pin ever, etc.
Second time play: Yeah this sure is a big pinball, I wonder if the flippers could be stronger?
Third time play: I wonder how many other machines could fit in the place of this game?
Fourth time: (I'll let you know when I play it the 4th time)

While its cool to look at and it is a sure showstopper, the gimmick wears off quick when you realize there isn't much more to the machine or than its size.
4.057/10
1 year ago
CLA

A neat novelty game and is an eye catcher when you walk into an arcade. That said, the playability is not fantastic. The nostalgia factor is high as I remember my younger brother and I being too small to reach each flipper button so he would take one side and I'd take the other. Certainly worth playing if you get the chance.
2.504/10
2 years ago
H2O

I've never walked away from a game of pinball in my life...even when location games have had maintenance issues. I walked away from this game after two balls. It is butt. Pure butt. An hour later I felt bad and tried again, but just couldn't do it. I let ball one drain and continued living my life. I have no regrets.

I do think it is important to always find at least one nice thing to say about everything. So...

Sure, the gimmick (I'm throwing you 3 Pinside ball rating thingies on this rating scale for Toys and Gimmicks) of a giant pinball machine is a curiosity. Yes, I can brag to everyone about how I've played this game and how special this should make me. And the backglass is better than at least 50 others in the annals of pinball history - especially if you are tired of looking at all the scantily clad women that grace just about every other machine in history.
2.065/10
2 years ago
MOF

It's kind of neat to play "The Largest Pinball Machine Ever!", but it's more of a novelty than an awesome game. Playfield runs kinda slow because it so large. You're constantly waiting for the ball to come back. Over all, fun the first few times, but I might pass on this in the future.
5.305/10
3 years ago
MJS

A true novelty game, if you ever seen it out in the wild watch people point at it excitedly, start a game and then struggle to even play all the balls before they walk away.
6.149/10
3 years ago
CPI

It plods along, but I find the extra patience and different physics really appealing. And the theming is kind of perfect. I always play a bunch of games whenever I have the chance. A very unique and pleasant experience if you can find one that works.
Probably the lowest-rated game that comes with the caveat that I'll ALWAYS want to play it when I see it.

This pinball machine is just like Andre the Giant late in his wrestling career. Imposing size and impressive to see in person, but slow, plodding and painful to experience. It is a game that you have to play a couple of times just to say you've played it, but it's really nothing to write home about, and offers little in the way of "fun" beyond having someone take your picture beside the game once your game is over. It fits in with the rest of Atari's bland pinball lineup. I can actually say I've tilted a Herc, not on purpose, in regular play trying to nudge a ball out of the outlane. I'm lucky I didn't pull a muscle.
3.392/10
4 years ago
PSN

sorry but what a waste of wood. They would have been better off letting that tree grow instead of it dying to make this turd. When I first saw it I thought, Wow, this is going to be GREAT!. nope. SUCKED.

The entire game concept is a gimmick. It is really cool to play it once just for the "gimmick". Way oversized game that plays extremely slow. The pinball is not a nice small metal ball, but something like a plastic ball from a toddlers baseball and bat kit. "Lastability" for me might be to play it once a year (if I see it that often) just to smile at the gimmick concept of it. Not a "serious" pin for me.
6.444/10
4 years ago
TBK

Everyone pretty much knows this was an Atari novelty pinball machine, but it still has historical value.

It is not as much that it is a "turd" as people think in terms of gameplay (but it is VERY SLOW), but it is hard to find replacement parts for machine.
Gameplay is average, if the game is well maintained, but most are not.
Reliability is average, but many of the assemblies were not really designed well for this game.
Game code is below average, and sounds and music is minimal.
Basically, it is like any other early Atari SS game.
Backglass makes a great wall hanger though, if you can find a parted out game which has reached an equilibrium these days.

It uses a cue ball as a proper ball, if it shipped with something different from the factory, I don't know, because I never saw one NIB, as this was just a few years too young before I started tech work.
Maybe gameplay could be fixed with a new improved polycarbonate or ceramic ball in the modern age?
Nah, not really.

When I owned one, I had to get specially built machines assemblies when something broke like pop bumper assemblies, yokes, and such. That was the real PITA.

As a game it has plenty of value in museums or businesses.
Really draws the crowds and makes good money.
Still REALLY EASY to get $1 a play.
No change in mentality today.

It is not always about pure collector value, this game was never meant for that consideration when designed.
If you have the space, a full size pick up truck, and a small wad of Benjamin Franklins, certainly a consideration, but make sure it is COMPLETE, as many seem to be missing parts these days for the reasons I mentioned.
5.936/10
4 years ago
DEF

OK, Hercules is far from a good game, but I think it's better than it gets credit for. I played the one at Flippers which is in excellent condition with strong flippers. It looks like you'd want to play half a game and walk away but I kept coming back to it. I mean, it's kind of a pinball machine. It's got loops, pops, slingshots, targets, a... "spinner" that never really spins. Ball control is easy because the ball often comes to a dead stop or rolls up the inlane if you just hold the flipper up. And hey, left lane up to the rollover lanes and the right loop shot... I'll say those are two decently satisfying shots for a novelty monster. And for such a simple slow beast... the rules are fine! There are definitely worse novelty games out there, even the polar opposite Super Mario Mushroom World is worse IMO.
3.497/10
5 years ago
SAP

The first and last of its kind!! And for good reason.

I really wanted to like Hercules! It looks so cool. But the hype is true: it plays terrible. In some ways, it's not as bad as I thought it would be; in other ways, it's worse. There's just not much to shoot at, there isn't much skill involved, and the whole affair just feels overly clunky and unnecessary. If you're looking for a unique conversation piece, sure grab one...otherwise, I'd steer clear.
3.500/10
5 years ago
ACE

The novelty wears off very quickly and all you are left with is a sparse, boring play field
3.763/10
5 years ago
AGB

Of course, this isn't really a "pinball" game, and of course the whole game itself is a gimmick, but I thought I say a few words about it.

Even though I've rated it as a sub-par game, I'm glad I've played it, and I'm glad the title exists. Innovation and stretching the status quo is important to keep pinball alive. Sure, this is a silly game, but someone at Atari said "Let's see how big we can make a playable pinball machine," and they gave it a shot. Now we know what happens when cabinets are maxxed out - good to know.

I'd recommend this game to anyone for one "experience" play. Probably don't want to own it for any reason other than collectibility though.

It was cool to see this at funspot. Probably a pretty rare pin but only worth playing once maybe twice.

This game is similar to the giant slot machines you see in Las Vegas. It gets your attention and you want to play it, but you won't be playing it for a long time. It is quite rare and if you see one, definitely play it. The drawbacks are that it plays slow and there is not a lot to shoot for. Still, you must give Atari credit for being creative.
5.893/10
5 years ago
TOM

this game is one of those games you play once and you never have to play it again. you get attracted to it by it massive size but then you sit through a sluggish game due to its heavy cue ball. if shooting the ball is a bigger challenge then the game you know you have a problem.
4.808/10
5 years ago
BZY

I remember this one from an arcade at Florence mall in northern Kentucky called TILT... it is a huge game played with what I think was a rubber ball...wow..how quick that was..lol. Total novelty..but I remember that same arcade had The Addams Family and Twlight Zone when they first came out so you could walk by and look at Hercules when you played the fun games...
5.622/10
6 years ago
904

Lightning fast gameplay....just joking. This is as slow as it gets. A must play if you see it because of the novelty.. The art is pretty good but that's about it.
Next12
There are 39 ratings (that include a comment) on this game. Currently showing results page 1 of 2.