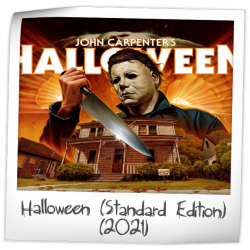 This game has received 2 approved Pinsider ratings. 23 more approved ratings are needed to get a rating and for it to be eligible for the Pinside Pinball Top 100 ranking.

Ultraman / Halloween is the latest offering from Spooky pinball.

The Pros:
This is the first game I've played since Gottlieb Haunted House (1982) that has 3 playfields. The shot selection on the two miniature playfields in particular is very well done. The top playfield has a spinner! I didn't get much time on this design, but I have to say that playing multiball on three playfield simultaneously is a mind-bending pinball achievement! Skill shots and multi-ball make the most of the shots on the left hand side of the playfield as well as the standup targets between them. The lighting around the edges of the upper playfield and the colored LEDs are very well done. Integration of lights, colors and guiding the players eyes to shots that need to be made is better on this game than most spooky games in the past. The rules are laid out on the screen for the modes and multi-ball for easy player access. While still not at the refinement of games from other manufacturers, spooky keeps getting better with this with every single game that they produce. With pinball has a niche audience, spooky seems to have found it.

The Cons:
Between Ultraman and halloween, Halloween seems to have gotten the more passionate treatment between the two themes. While I love the two upper playfields, the main play field does not feel as polished in terms of gameplay. In particular, the drops to the subways under the playfield to the inland kickouts, while interesting are stalling to the flow of the game. Also, it takes a few times to learn the cues that the lights on the aliens are giving you to be ready to play pinball as the ball magically seems to appear from under the playfield at the end of the flipper.

The Takeaway:
Halloween is probably going to be the more popular selling theme between the two. For me, the left hand side of the playfield is clunky and while the ramps up the middle are easily made, I am still figuring out their function. Especially getting to the upper mini playfield. Spooky is doing more and more with each game. More toys, more shots and better clarity with game rules. Shooting this game is interesting for me. Well I really appreciate the hole to the lower left hand side of the playfield, many of the other shots that are similar to it on this game feel like they are very crowded. The amount of game that resides in the upper play fields is something that I'm going to have to learn about to be able to access them at will. However, there's a lot to work with here. I'm going to look forward to see what software / rule updates come along with this game.
7.321/10
53 days ago
DAD

Im a Spooky fan and a TNA owner and I thought about buying one on the 1 day they were for sale. Horror films aren't my thing and I had never seen Ultraman before so I passed. I'm glad I passed on this one.

I played this at SFGE. So to be clear, there was a loud convention in the background which made immersion in to the game a little difficult. I hope to play this in a quieter place and re-evaluate my rating at a later date. I think anyone who plays this in an arcade is going to feel the same way. Home collectors may not.

Overall the theme and asthetics were good. Gameplay didn't feel fluid with the multiple scoops/doors along the left of the playfield. Balls from these doors and other places on the playfield pop up in the lower return lanes which are covered by plastics. This means when the ball dissapears under the playfield, you can't look up at the lcd screen or even at the rest of the playfield because the ball is going to appear from under the return lane plastic and drain at an unknown time if your not watching. The majority of shots result in this disappearance to the subway. There is a flash at the lower slingshot, but if your looking up, your likely to miss it. Not sure if this is a horror movie surprise kind of thing, or with less background noise you can hear it coming. I found it ridiculous.and kept me from immersing in the rest of the game.

The second thing that got me was that it felt cheap and flimsy. The shaker integration seemed great (and sometimes extreme) but every time it shook I felt like something was going to fall off. Just kind of ruined the horror theme surprise.

I only caught some animations while standing in line and snippets when I dared to look up.

Not a great pin for me. I played it twice and that was enough in this setting. Hopefully I find it again in a quieter place
1
There are 2 ratings (that include a comment) on this game. Currently showing results page 1 of 1.