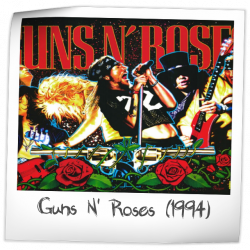 There are 151 ratings (that include a comment) on this game.
Currently showing results page 1 of 7.

Excellent fun suffering from terribly DE sound. The sound upgrades are a requirement for this machine.

Yeah this game rocks. Great shots. Great flow. Everything works very well together. Songs play through our which is fun instead of having to start song.

We have owned Data East GNR pin for about 14 years.
Still fire it up and have a great time playing.
It has enough shots to entertain and fun modes.
LOVE the G & R ramps
GREAT music
Looks great , Just add some Pinstadiums and this is a beautiful machine.

sirisles has owned this game in the past.

Pinsound board and color Dmd is a must, it takes my rating from a 7 to a 9. The under playfield magnets are great! When set up right it plays fast and is a ton of fun! I played a “stock” GNR that was in poor shape and it was a disaster, not fun and lackluster. Mine has a full restoration and is perfect. It was the first pin I ever played and learned the rules on. I was able to buy one 20 years later, and absolutely love this game. It will never part with me!

I played this for hours at a work party set on free play ,, just found it boring as hell , really wanted to love it as a big GnR fan , for me this is the most over rated data east of all time. ,

This rating is based on recent work I performed on my GnR. I bought the machine completely stock. Even with the lackluster sound and lights, the machine was a favorite of friends and family. I have recently added PinSound Plus, Flipper Fidelity, Cointaker Premium LED's, Titan Rubber (silicon), Slash Toy, and Lazeriffic Topper. MAN...all I can say is either find one with the mods, or get one and do them yourself. This machine is so much fun to play. It's a machine that anyone can enjoy, with great sound, smooth flow. With the PinSound, Flipper Fidelity mods, new sound file (downloadable from PinSound), Tital Rubber (makes the game WAY faster) and LED's this machine rivals more modern rock pins and will stay in my collection. I have played 50+/- games on the new JJP GnR and although I think the tech and rock concert feel of the JJP is next level, I like the flow and shoots on the original. I planned on getting rid of my Ghostbusters machine until I updated the code, then I though I'd get rid of my GnR to make room for the JJP GnR, but after all the mods, I think my eye is turning towards Kiss LE to move and make room for the next adventure. UPDATE...I made more room and added Iron Maiden and Monster Bash. I was also able to get an allocation for Led Zeppelin LE...so instead of getting rid of a pin, I made room and added 3 more! Still love GnR and plan on keeping it in the collection.

The music (which is great if your a fan) is a tad repetitive
Challenging enough to keep your interest. Very fun to play
9.740/10
2 years ago
???

An awesome, under-rated, game. There is a lot packed into this machine and the music is fantastic. This machine rocks and looks fantastic even 25 plus years after being released. I've owned dozens of machines throughout the years and there are only a handful I wish I had back after selling. This was one I had to go track down more than a decade later and am happy I did. To the complaints about the sound - this sounds great stock for a pinball machine, especially considering the era. Doesn't mean it cannot be improve, but try to show me a pin of its day with music sounding anywhere near this good: you can't. To those who complain it is repetitive: every machine is repetitive; GnR is no more repetitive than my MM or AFM was. The bottom line is that the theme, music, goals, shots and overall play are a lot of fun - much moreso than the typical machine. I used to play in (and occasionally even won) pinball leagues and would play pinball for hours each and every day. I cannot say this is the most difficult or challenging machine to play for the experienced player, but that seems to be my thoughts on almost everything I have owned.

Like it. Played a lot this week, but started to be too repetitive in the music. I think long term, it’s novelty will wain.
9.900/10
2 years ago
ZEL

Best band Pin out there period. Fun to play and music is awesome! Artwork and play field are fantastic. A must own if you are a fan of the band and pinball.

Best Data East period. So fun to shoot, if you are. Fan of the band this is a must have. Lots of shots and objectives for the era, one of John Borgs best even considering everything modern. Perfectly executed theme integration.

Dkjimbo edited previous rating on November 02, 2019.
Dkjimbo has owned this game in the past.

I finally got to play one that was in great shape with good lighting. ColorDMD mod is great for this pin. Had a really fun time. Interesting shots, layout and code progression. I would play a "good one" (functioning well with good LED lighting) lots of times on locations, but would get repetitive to own one for a long period of time.
7.840/10
3 years ago
B16

A very stellar effort from DE--maybe their best game. Fun to play, the ramps are cool, good lighting, rockin' music (if you like GnR--I'm only a casual fan). Don't know why we need another GnR, as this one is very good.

Easily the best music pin! Game still holds up today! Great dots, great sounds/music. Crank this baby up and she jams! Great, satisfying shots. Plays fast and mean, the way it should be. The best DE pin by far.

Of all the bands that are out there this is definitely one of the best pinball machines dedicated to a band super great when you get to riot fun all around
8.884/10
3 years ago
TEZ

Having owned this machine for 12 years I feel this is a good place to start with my 1st Pinside review
All my reviews are going to follow a simple formula for those reading.
Number of shots to make - Pro's - Con's - Must Have Mods - What To Look For When Buying

Cons:
* The repetitiveness of "Welcome To The Jungle" you better like that song (or get pinsound)
* Not a strong wizard mode

Must Have Mods: (Note I will not include things like LED's, Color DMD, Invisiglass or Speaker Upgrades unless it's really badly needed)
* Speaker Upgrade here is an absolute must
* Cliffy Protector for Axl Hole

Great looking Data East widebody with the genius G and R ramps. Not as much fun as some other DE games of the era like JP, WWFRR and Tommy but still a blast to play. Needs a pinsound to get the most out of it. You will pay a premium these days for one!
9.376/10
3 years ago
PHI

Bought it as a trial, wow what a nice game. If you like fast game play like Theatre of Magic or Medieval Madness Im sure you will like Guns & Roses. Very fast and good nice shots, 2 shooterlanes and good music. Magnetic field (like addams family), lot of varities in this game. Not the most easy one but after a while very addicted.
With upgraded sound speakers and a pinsound board this is a wonderfull pin.

Wow, what a game. Excellent layout with shots that are fun to hit. Great art and music too. Rules are really good although not terribly deep. Probably my favorite Data East games. I just wish it wasn’t priced so high, although I can see why it is.
7.381/10
4 years ago
SUS

Pretty fun mode based data east game. Don’t like it as much compared to Jurassic Park or tommy but it’s fun. Guns N’ Roses is a good theme but I don’t care much for he layout. The G ramp is super steep and hard to hit and there aren’t many shots to make it feels like but that could just be my experience with the game. Overall it’s good stuff.
7.513/10
4 years ago
LJK

I bought this pin and it sounded so crappy. Threw in a pinsound board and Flipper Fidelity. Holy mother%##%÷=. Amazing. Must do mods. Period. Now it not only stands up to metallicas and acdc but rocks even harder. The modes,shots, features are through the roof. They just don't make pins with this much on them anymore. Good use of the widebody. Honestly this pin is highly underrated not sitting in the top 20 minimum.

Edit: i have sold my game after playing it a fair bit the lack of depth in code hurts the lastability. This is a personal preference where as my wife loved the wide variety off the start of the game i prefer games that have more to achieve further on than just score and riot mode. Fun pin but it had to go to make room for the next game