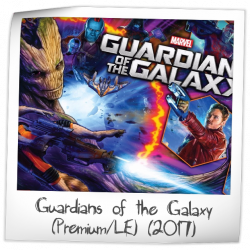 This game ranks 1st in the game group "Guardians of the Galaxy". The group itself ranks #50 in the Pinside Pinball Top 100.

There are 55 ratings (that include a comment) on this game.
Currently showing results page 1 of 3.

The game play design is great with intuitive character game modes. There is a special high scoring sort of secret Cherry Bomb multi ball that is difficult but fun to achieve. The MB is timed returns all drained balls during the entire session. A very creative and different feature from other pins. The Groot feature is very cool and well placed. Rocket raccoon shot is difficult to hit and riffles the ball back at you when hit which is exhilarating. Overall, one of the best game play designs in my opinion…loads of fun and sarcasm!

This is such a great game, the LE. I would personally not take the Pro due to the lighting. The lighting on the Prem/LE is so much more. All RGB lighting, crazy effects, looks beautifull. Game plays great, great flow, nice shots, easy to understand rules. Full video assest of the movie, assets on music, and with the audiomod even better. Nice call out also with the audio mod all good. Theme is just a dream for me, great movie. Took me some time to get this machine to my collection. Happy to have it. Toys are great. Overall classic machine.
8.940/10
11 months ago
ZZZ

Underrated game that has easy rules/modes, great theme and a fantastic audio/video package (with the audiomod). The game shoots great in its classic fan layout but it does have some tight shots that provide a challenge. Overall, it's a blast to play for young and old and the LE is a very nice looking unit. I was surprised that it wasn't ranked higher considering how fun we are having with it and how great the theme is but I understand that there was some software issues in the beginning of it's lifecycle that could explain that. Nonetheless, me and the family love this game and it's currently in in my top 10 - just play and enjoy.

Had this for two months on rent. Was bored after 2 weeks. Can see the appeal for some but I just felt there wasn’t too much going on.
9.320/10
1 year ago
BJG

I recently got this so still on the honeymoon stage. Love it! Same basic game as Metallica with different rules (that I haven't completely learned, I'll be honest).

Right now just enjoying the music, theming, toys (Groot is great!). This game penalty deserves to be higher on the list.... I will probably update this review in 6 months or so ...

GoTG is a fun game that combines Iron Man and Metallica. If you own either one of these games you may want to consider getting another title because it plays similar to both of them. This makes since because it was designed by John Borg and has a fan layout. That said, I like Metallica's game play much better. GoTG just doesn't have the ruleset that Metallica has. I graded this game pretty high because I like the theme, cleland music score, and art. However, gameplay is just ok and the rule set is weak. I enjoyed owning and playing GoTG but it isn't a keeper for me.

This is really underrated. Its fast, fun, absolutely beautiful colors and light show, some shots are easy and some ... can be difficult at times. Love the use of the magnets under the playfield for the orb multiball, really gives the ball a spin. The Cleland sound makes the game and people always want to play it just for that. If you liked the movies you will enjoy the callouts and movie clips. Keeper for sure.
8.880/10
1 year ago
JCZ

My rating is influenced by the Cleland sound mod. The games big miss is the lack of music, but with this add-on, it becomes a whole new animal.

Great fun game that people just gravitate too when they come over. Easy and hard at the same time.
Nice shots, hate Rocket just so fast that kickback. Great use of magnets on orb multiball. Upgraded with Cleland sound and it’s a beauty. Yes one more game.

My pin is has the cleland mod a must if you own this pin. Adds a lot more songs and replaced the voice actors call outs with original movie clips. This game a Has no call outs it would be a welcome upgrade if rocket would tell me to shoot the left ramp.

Osivette has owned this game in the past.

I found the game way to fast for me. It seemed a constantly flipping battle to stay in the game. Not my favorite game. Good theme though. Game play was not for me

dbarker has owned this game in the past.

Having owned MET pro the game layout looked quite familiar. However, it plays quite different I can say.

The right ramp is more difficult to hit as the left ramp but if you are in the zone and hit left right left right this is a great feeling.

The rules are satisfying and nothing wrong with them. They are relative easy to understand and the multicolored inserts guide you through it.

I have the LE and the hands look great must must admit that seeing the insert in te left loop is not easy. I see this as a design error. But it is not a showstopper.

Groot is a great toy and is properly used. You can lock more balls in them and shooting Groot on Cherry bomb multiball while the mouth opens and closes is a challenge I can say.

For those looking for real movie music and audio there is the Cleland mod who did excellent work with it.

Love it. I find it has excellent balance between kick-ass and being able to get deep fairly frequently. I often find myself close to Immolation or Save Xandar. Close, but not quite. This is the way you want it. I like having to think about which mode to start at which point in the game. I have the Cleland sound upgrade which makes the game WAY better than stock. I knocked the sounds and music section based on the stock lameness.

Overlooked this game when it first came out. Just picked up a routed LE and it is fantastic. Really shoots well. Code is fun. And Clelands sound mod puts a bow on this game. Has that "hit start one more time" feel. Very happy to have it in my collection for now.

pinghetto has owned this game in the past.

This definitely makes my wish list! I AM GROOT!

Underrated game. The music alone is a huge thing on this machine (even if it means a custom code) shots are all great and flow is up there also. Daughters favourite game.
8.444/10
2 years ago
DDB

One of my favorites. Never tire of playing. A bit glitchy at times. But when it’s firing on all cylinders I love it.

Pinbaldo has this game on the wishlist.

Lots of fun to play might take a little while to figure out exactly what to do in this game but once you do makes it so much more fun. Lots of nice shots,cool multi balls, But one thing you do not want to hear in this game is Times up ...all in all real nice game.

There is a lot to like in this game. I would certainly recommend the Cleland sound upgrade. The movie had such killer music.

Played the LE with the last code... Wow, great game, great sound , very good music.... If you like the movies, you will like the game...

The hand of groot hide the left loop but its noy really dramatic for the gameplay.

Great game that is overshadowed by the similarities it shares with Metallica. I will say that the light show on the premium compared to the pro are worlds apart. People often gripe about the groot arms blocking the view of play but this never was an issue for me. All in all with everything stern has implemented with recent code updates I’d highly recommend the premium!

P.S Cleland code is a must have.

Let me preface this rating by stating that I own a GOTG LE with the Cleland Code and am so happy that I made the decision to doubt the haters and purchase. I played this on location before buying and couldn’t stand it. While I love the theme, the rules were clunky, the sound was terrible and orb multiball was broken, now that is definitely not the case. I love the different modes and getting the sounds, speech and music from the actual movie makes a huge difference in the gameplay and fun factor. The flow of the game is great now and the modes give variation to what you shoot for and when. And being able to hit the ball around to all the music from the movie, again, really makes a difference. I love being able to stack multipliers and in contrast to most games, a bonus multiplier can really make a huge difference in your score. The only minor mechanical issue for me is the drop target on the orb multiball seems pretty poorly designed as the weight of the ball sometimes prevents the target from functioning properly and so you get some unnecessary ball searches during the game more often than you should. The rules are now very deep and I still have a lot left to explore. I love when a game is hard enough to master that you can get really solid scores and have yet to uncover deeper modes, gives it lastability and replay-ability. Orb multiball is HARD with magnets actually chucking the ball is random directions instead of just slightly diverting it like other games. But with the ball save you get while it’s on, you don’t feel cheated. Also, as it’s relatively easy to get, though with a dangerous shot above the middle, you can get it multiple times in a game. I don’t see this ever leaving the collection. In my game room, this bad boy is always being played by one of the kids or a guest. Absolutely love it, happy it sucked so bad when it came out because I got it at an absolute bargain!!!

Next123
There are 55 ratings (that include a comment) on this game. Currently showing results page 1 of 3.