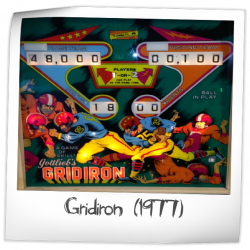 I love this game. It is simple but I can't stop playing it.

Brayika has owned this game in the past.

A real fun game once you upgrade the flipper coils to make the vari-target shots.Not a fan of the four flipper design.Playing against someone brings out the best in this game.The bell is cool.Buy one if you can find one that's reasonably priced.
5.207/10
2 years ago
RHO

The game is nice to look at, but the four flipper setup is a bit cumbersome. It does however add a sense of frantic-ness as shots from the lower flippers are run-and-gun, because you can't trap. The darn vari-targets are here again, my least favorite Gottlieb feature, but at least they add to the overall theme of running the ball up-field. I think the baseball games Gottlieb made were executed better. The artwork here is better all-around than the wedgehead version of the game, Pro-Football. More gritty and realistic, better cabinet stenciling, too.
9.200/10
3 years ago
STE

A great 2-player EM game to usher out the EM era. The Gordon Morison artwork is outstanding and captures a surreal look at what american football was like in the 70's. Though much louder, the touchdown bell is also reminiscent of many of the sixties EM's. The play is made difficult because it allows almost no ball control with the dual flippers, and takes some getting used to. The only real knock on this is that the two roto targets are basically out of play as they align to the empty space between the flippers.
6.781/10
7 years ago
B13

I have never played the real game but I play it on our virtual pinball machine all the time. I love this game a lot. Out of well over 100 games to choose from I choose this one early and often. It's unique playfield and scoring are addicting to me. I find myself trying to out do my football score more than my traditional pinball score. Our family keeps a running best score board just for this game. It also doesn't have a plunger. The ball is shot into the playfield from the drain hole via a flipper press. I think the designers did a fantastic job with the variable strength slider targets. The harder you hit them and push them back the better your football score. I would not pass up the opportunity to own this game if I found it in good shape and decent price.
1
There are 6 ratings (that include a comment) on this game. Currently showing results page 1 of 1.