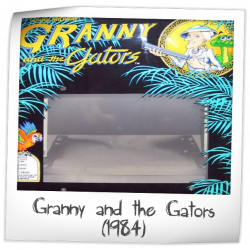 This game has received 8 approved Pinsider ratings. 7 more approved ratings are needed to get a rating and for it to be eligible for the Pinside Pinball Top 100 ranking.

I only played it for a little bit, but that arcade game is really not fun to control. If it was a stand-alone arcade game, I'd say that it was a very bad arcade game.

Edit: It's possible that if I took the time to get good at this game and learn the strats I would start to enjoy it. But I have no desire to do that.

My first "pin" ever was baby pacman. when I heard of it I thought it was super unique, found one. Think I paid 1k for it, shipping kicked my ass but lessons learned. Then I found out bally made another title called G&G, that was supposed to be somewhat better in the playfield department.

After playing real pins for the last couple years I have to say it's definitely lacking in that department. That's just the thing, you can't really rate this in that light. The gaming portion is probably the best thing about this game, I thought they did a great job at incorporating both the game and pin together to make a descent game.

Will it keep my interest for hours on end? hell no, this one of those games where you can play a handful of times and call it a day. Plus I'm not really a big video game player anymore, I used to love me some tubing, but even games nowadays get boring to me unless it something like GTA or Fallout.
Somebody who actually collects and plays vintage video games would probably have more of an appreciation of this then I. Still think it's the better of the two bally made in that time frame.

Mine still works, and hopefully someday I'll get to restore it back to it's former glory!
5.372/10
2 years ago
ZUL

After Baby-Pacman... came Granny and the Gators.

The Pros:
The pinball game is really quite good. Interesting shots and fun to be had.

The Cons:
The videogame is HORRIBLE. As in it is infuriating to play. The opposite of fun.

The Takeaway:
Would someone kindly remove or re-write the video game portion of this table? I know it is asking a lot, but the vidja on this deck is not helping out the team.
6.883/10
3 years ago
SDC

Interesting game and good fun but not for me, the video game portion I actually though was quite fun but you spend most of your time looking to get out of that and into the little pinball playfield down below. One to play if you see it but probably not one to own.
1
There are 4 ratings (that include a comment) on this game. Currently showing results page 1 of 1.