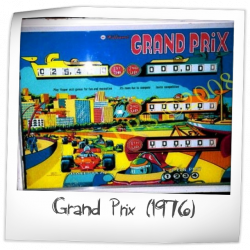 There are 36 ratings (that include a comment) on this game.
Currently showing results page 1 of 2.

So much symmetry! Designers know, you only have to create half a pinball machine if you make it symmetrical. It's also half as fun to play. Hard pass for me.
9.183/10
7 months ago
KOJ

First, although they look similar, this game is quite a bit different than Liberty Bell. This game has inlanes! (Liberty bell does not). Inlanes make all the difference here to really line up that shot for a big spinner hit, LEFT _or_ RIGHT.

The rules (also different than liberty bell in the sense of a Bonus collect). Huge strategy here about going for spinners to 1k, bonus advancement, actively collect bonus? options and decisions for how the game is playing.

Easily one of the most feature rich EMs I have played, the rules and gameplay fit the theme perfectly, as this game is about speed.

4 players is an added treat as everything plays quickly, is fun to watch and compete. I recommend this game without hesitation.

super fun EM, I have the 2 player version liberty bell that can be had for half the price. Plays fast and ripping the 2 spinners is a blast.
7.662/10
10 months ago
DOC

Grand Prix is one an EM that almost feels like a Solid State Game. Dual Spinners, Drop Targets, Kickouts -- all the fun stuff. More than that though if plays/feels much faster than other EMs I've had experience with. Makes sense for a racing car pin, huh? I like the left/right bonus feature and the kickouts that allow you to collect the bonus when entered.

It is a simple but fun game that could’ve implemented the racing theme better. For me, the spinner and bonus x multiplier makes the game fun. It is repetitive, but I love it. The machine titled a little too easy for my liking and the flipper motors were really loud on this one but it did not distract from the fun.

Just a double spinner monster of a machine. Simple and repetitive? Heck yeah, just the kind that works you good and steady to really consider your shots. Teaches you to capture the ball and make specific choices more than most early EM models.

First pin I ever bought. Tilt this machine up high on it’s back legs, high tap the transformers, put two coats of carnauba wax on it and go. A perfect EM that will keep beginners going and is still challenging to the serious pinhead. Great artwork, nice flow, great layout and the loud spinner targets are such a satisfying shot. See one cheap, grab it.

I grew up on this game. It has been in my family since before I as born and continues to be. I am a SS guy but as for EMs this one has always been a lot of fun. Hitting the spinners is always great, as well as the bonus countdown when you have done a 2x, 3x, or 4x!
7.082/10
1 year ago
DDW

I couldn't get enough of this game!!!! Love hitting the spinners time and time again and the simplistic design. I am a racing fan so this is right up my alley and I will be picking one up very shortly.
7.570/10
2 years ago
WXW

A Grand Prix race ought to have more twists and turns in this, which plays out more like an oval track. That said, this is very late in Steve Kordek's design career, and it may be his last great "long shot" playfield. As noted in other reviews, gameplay involves alternating between the two lanes on either side - orbit shots, more or less, with a half orbit, in order to trigger the spinner - and doing it in the right sequence requires that you master the art of the post pass. Yet, because of the open ended inlane guides, it's very dangerous to trap balls, so game play requires fairly adept fast flipper management and judgment. It may have been a drain fest in some ways when it first came out, but it has aged well; it's a good player's game, emphasizing skill and sequencing, and that's pretty good for a very late EM game.

As a follow-up to Space Mission/Odyssey, the theme here is a bit flat, but you can't have everything on all machines. The artwork here is typically excellent Christian Marché, with detailed Grand Prix-like city race courses depicted in backglass and plastics. The main playfield, though, could have used a little jazzing up, given the theme.

I think in the end this machine is one clever twisty shot away from being a great one, but as a pretty good one, it should have some staying power.
7.333/10
2 years ago
SAG

Grand Prix is a fairly straightforward game. Hitting the spinner raises the bonus value of that side; maxing out the bonus value juices the spinner value up, allowing for lucrative spinner rips. The saucers collect the bonus, resetting it. The pairs of drop targets in the center raise your bonus multiplier. At the beginning of each ball, one side's bonus counter is lit, and this counter's value is awarded to you upon draining. The game's goal is mostly to hit the spinner over and over - if good spinner rips are up your alley, this game will be, too. Just mind the inlanes - trapping up is a dangerous game, here, as more often than not the ball will go straight out the gap in the inlane guides.

FAST. That is one word which I would use to describe Grand Prix. The DC power slings the ball around the tables with reckless abandon. Those with lightening quick reflexes need not apply. The feeling of hitting one of the spinners and seeing the lights strobe in order while the clickety-click spinner spins is one of the best moments you will have in pinball. I wish the backglass looked better, there is no character to it. Oh well, no game is perfect.
10.000/10
3 years ago
JAS

This is the most fun pinball I've played since Addam's Family. Great fun with spinners beats out my F-14 tomcat pin multi-ball all day long.
7.746/10
4 years ago
PVW

Love the spinners and the two independent bonus ladders. This is a great four player EM. Suffers a little from the typical 70's art, but overall a very fun EM.

One of the best EMs ever. Has everything an EM can have - spinner, bumpers, drop targets, kick-out holes.
Lot of fun to shoot the spinners to increase the bonus. Fast & challenging. Be careful as it has inner ball return lanes with an open slot, forcing you to be very carefully at catching/stopping the ball.
Really like it and one day I will own one.
9.189/10
4 years ago
???

I only restore the games I really like....this one is on the list.

For an EM its a fun game, it sits beside my TZ, WW, RS, WH2O etc. and still I play it . Something about going back to pinballs roots once in a while. Its been in my family since 1978 , passed down twice and I treat it like a baby. Nice spinner shots, love the bonus multiplier drops, and the drops in the pop bumpers keeps you nudging it for days up there . In lanes are tricky, trapping a ball on a flipper is a challenge, darn fine game from that era. Gotta keep playing it regularly, cant let it sit... don't know how to work on these old dudes and i assume sitting idle is the worst thing I could do to it.

Grand Prix feels like a Williams EM. Shooting the spinners and the center drops is fun, but the rules seem a little weak. The saucers are fun to shoot, but they don't seem to add much to the game play.

As far as EM's go - I wouldn't snatch this one up unless it was dirt cheap.

This is hands-down one of the fastest, most modern-feeling EMs I've played. Definitely my favorite Williams 3" flipper EM (and really, my favorite Williams EM overall.) The theme really does it for me, the backglass is great, chimes are good, playfield art is decent. Though I don't normally love symmetrical layouts, the alternating bonus from ball to ball makes this one work very well. The inlanes that let you lose a ball if you catch it the wrong way keep the pace up. Great spinner shots, and the ability to add double bonus on any ball adds something. Great risk/reward in choosing to collect bonus or rip the spinner for 1000 a spin once bonus is maxed on the unlit side.

Just a fantastic game, and the most popular EM I have for league play.

Collin has owned this game in the past.

For and EM, this game has a lot going for it.
4 Player, two spinners, two collect bonus holes, extra balls, rotating bonus advance and a collect bonus light that switches sides between balls. One of the greats.

One of the fastest EM's I can recall. If you love games the reward you for ripping the spinner this one doubles your fun. I played it at a tournament and fell in love with it. Shortly afterward I found one in my area. I guess it was meant to be for me to own one! This will become a permanent fixture of the collection!

Next12
There are 36 ratings (that include a comment) on this game. Currently showing results page 1 of 2.