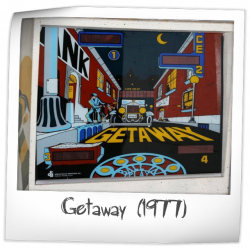 This game has received 3 approved Pinsider ratings. 27 more approved ratings are needed to get a rating and for it to be eligible for the Pinside Pinball Top 100 ranking.

There is something here but it feels like a neat offbeat idea implemented by monkeys. The geometry of the game just feels wrong. The third flipper is just ridiculous, almost intentionally placed to be annoying. The gimmick is so cool: three lanes with flip floppy flags that change the route between them. The single entry point only shootable from the lower left flipper feels too limited. There should be a top entrance or the second lane should be an entrance or a way to get in from the upper flipper. I don't know, I'm not a playfield designer but neither was the guy who made this. I want to love it but don't.

This is not the Williams High Speed-Getaway. This is a completely different table in many many many ways.

The Pros:
A unique and different PF. The spinner is nicely done. The upper right hand side of the PF and the grid/ switches are brilliant.

The Cons:
This game's artwork is lacking. Another game with a strange 3rd flipper.

The Takeaway:
The hardware on this games feels very light and different than other manufacturers. The flippers are are incredibly responsive. With this in mind... the game plays quite nicely and will offer a very different and unusual experience playing pinball.
1
There are 2 ratings (that include a comment) on this game. Currently showing results page 1 of 1.