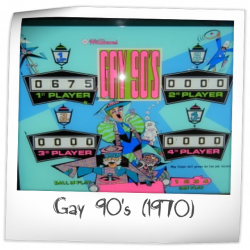 I picked up a basket case example for cheap, because I like tinkering with EM repairs. Also, I don't own any Kordek designed games. So, here goes.

The game doesn't look like much, but there are some cool strategies at work on this table.

There are bumpers at the top of the playfield that when hit, increment feature lights. Two of the features open a kickback pocket on the left out lane, or a gate on the right out lane. The three other features allow a bonus to be advanced. Once a feature is lit, you score it by either rolling over a spot rollover in between and under the bumpers, or by hitting the swinging target in the center of the playfield.

There are a pair of drops, one on the left, one on the right. Hitting either one of these raises a center post as well as lighting the center pop bumper. It is possible to have all the outlanes blocked for a period of time!

Each time you hit the target or rollover with the advance bonus feature lit, you add 50 points to the bonus, which can advance up to 500 points and a special. To collect this bonus, you need to put the ball into a kicker hole on the right side of the playfield. It's a tricky shot.

One strategy might be to get the left and right out lanes protected, and the center post up, light the advance bonus feature, and then go for repeated hits to the swinging target to advance the bonus to as high as you can before trying to sink the ball into the kicker hole.

There switches on each side of the playfield that will increment the feature lights, as well as drop the center post down.

I've never been much into the Williams EM's, but the two I just got are both great shooting games with interesting rule sets that rely on you aiming for certain targets while trying not to hit others. Much more interesting than the Gottlieb machines of the same era.

tamoore has owned this game in the past.

Almost nothing to shoot on this one. Wide open playfield. Nice artwork.
7.804/10
7 years ago
ZUL

Gay 90's is a game that is deceptive in how simple it is. Me likey.

The Pros:
Christian Marche has this game lookin' good! The Keystone Kops are goofy and the dame with the hat in the jalopy looks like she is having an orgasm. That or she's laying the most righteous f@rt ever witnessed on a pinball game. That's right, you heard it here first. Pointy People gettin' off! The game itself is a building of shots that lead to collect bonuses. OR you can play the game to have all outs blocked. Either way... you are going to have fun. Shooting the moving target is all about risk/reward.

The Cons:
The drops at the top of the PF are rather sparse. I guess the Williams drop target banks (that we know and love) had not been invented yet.

The Takeaway:
A cool game that is super simple and if you do not get your ball exits taken care of... can be really quick. I also have to say that if the upper bumpers were live... the ball may have never gotten down the PF. But I will say that lanes or another design element at the top of the PF would probably have been a better option.
7.748/10
8 years ago
TIM

Ok Caucasian2Step rightly called me out for not putting in text for my comments in addition to my ratings.

WARNING: This was my first EM at age 7, but my rating numbers are fair.

The Good:
This machine has the feeling of invincibility if you open the lane gate, the kick back and raise the up post. The swinging 100 score is fun, as is racking up the points in the kick out hole and collecting them with or without the up post.

The Bad:
The top of the playfield, especially the 2 yellow dead bumpers are quite plain. I would have liked to have seen color on it.

Seems like a rather rare pin but its a ton of fun to play and kids love it. Classic Williams bell sound and an interesting paint job to boot.