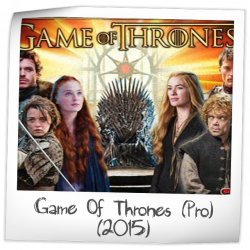 This game ranks 2nd in the game group "Game Of Thrones". The group itself ranks #51 in the Pinside Pinball Top 100.

Note! There are multiple versions of this game!
This is "Game Of Thrones (Pro)".
The other version is: Game of Thrones (Premium/LE)

There are 133 ratings (that include a comment) on this game.
Currently showing results page 6 of 6.

Played about 10 games on location. Other than the flashers being seizure inducing, I had a ball with it. The battering ram is a drain monster unless you backhand it, the ramps have a very smooth return, but after being on location for only 2 days the auto plunge couldn't even make it to the pops. Also the advanced selection takes way more than 3 seconds to kick in, however if it was a home game it would be easy enough to turn off.
8.096/10
5 years ago
AWT

I've played this one about 20 times. I quite like it. Heaps of cool ramps. Code is definitely better than usual at the outset for Stern. Very nice. I enjoy the dragon and battering ram shots. Really nothing negative I can say about the actual gameplay--it is great. The back glass is not-so-amazing.
The Pro I have access to on location has a cool feature for 'advanced' game play. This is a no-brainer for a pinhead. When it receives enough ratings, I imagine this will quickly crack the top 50 at least.
Cheers Steve Ritchie.
9.840/10
5 years ago
JOA

I wasn't very interested in this when it was first released (wasn't viewing the show). But two years after release I started to play this a lot in a bar that had it and got really hooked on it.

I really started to appreciate this pin in all of its aspects (yes even the artwork) but the one thing that really makes it so good is the ruleset. There are so many ways that you can play it that it never seems to get old for me. The flow is also superb with all shots flowing very naturally. The one more game factor is unbelievably high on this deck.

I've also started to watch the show and bought one for my home and this made me appreciate it even more. The game I bought had a few mods that are great (side blades and pyramid under the dragon) but the one mod that I would recommend to everyone would be the colordmd, it came out the same month as I bought my GOT so that was great timing.

This one will be bolted to the floor next to my addams and will be the last to leave if ever.

Very pleased with the pro version. Extremely fast, fluid and fun to shoot. And very solid code on release. Love the scoring opportunities with multipliers. Glad they are using the voices from the show. The artwork is a letdown, but it does look better in person.
8.780/10
5 years ago
ZUL

The latest Steve Ritche game from Stern just came out and Dan Gutchess had an unboxing/beta testing program. I was fortunate enough to play a few games on this new deck!

The Pros:
An incredibly smooth layout with great shots and a ruleset that even in it's earliest incarnation shows a great deal of thought and creativity. Two types of stackable shot/pf multipliers as well as a Dr. Who like House choice that alters the rules to your own style of play and strategy. Granted that this will probably be sussed out by tourney players who will find the best scoring choices and exploits, but from what I can see from the game so far, the "alliances" add layers to the strategies and tasks at hand. Building up gold and getting to buy/pass on awards is an interesting ruleset, but you have to be lucky enough to have the game give you an award you want to buy. This will probably be refined in tourney settings as well. The battering ram is a dangerous shot that really has to be nailed to register. I recommend saving this up for multiball/ ball saver play. The art pax looks solid, the PF is really well signed and the lighting does a better job of guiding the player to the shot that needs to be made next better than any game I have ever seen. The shot multiplier is noted on the bottom of the DMD and guides the player to work as many combo shots as they can without denying multiple shots to the same ramp/lane in a manner that is subtle as well as easily noted. Granted this may not be something you can pay real attention to when playing a hectic multiball, but it is always there when you need it. The Sword lock works incredibly well and the center ramp flows when it needs to without hinderance, and it traps the balls smoothly and efficiently when it should.

The Cons:
The game killscreened me and one other player during the evening's play. In my case I was just about to start Blackwater multiball and the game reset during a 4 player game. Yeowtch! I know that this is the first iteration of software for the game, but fatal errors during operation while the game hits the street? Hooo-wee! Dan already had an update that he was going to put into the game, but this game shipped with software that wasn't stable. The Dragon lane has the tendency to let the ball drift SDTM from the post lock in particular. Yes, it's another fan layout... The video mode. How do you play this thing? (OK, ok... I need some more miles on this table). The light show on this game is SO powerful that epiliptic fits will be attributed to playing this game (AFM Saucer MB on steroids!). The dragon is an interesting little toy, but the wow factor is not there for me on this flying lizard. I also do not care for wall multiball being started from the dragon shot with only a small text cue from the DMD. This layout may need to be seriously nastified for the top tier players. The video mode, not a fan of it.

The Takeaway:
I was prepared to be disappointed by GoT pro. The upper PF looks way sweet and while I can't wait to play the LE/Preem... I can say that the pro is a great game unto itself. It's a winner! Will the LE/Preem be similar to AC/DC where you just can't live without the extra PF? I don't know, but what I do know is this. Stern has another winner on their hands and Steve Ritchie has proven himself once again as "The King".

Sidenote: This is just my opinion, but I also have to say that while I love Steve Ritchie's games, he also has the benefit of a much longer production cycle than the other designers at Stern. Both KIZZ (H-D V2) and RassleMane-yuh are games from great designers who had to put out quick designs and came from the Premier/DE design cycles. Now while they can put out designs quickly, don't they deserve the respect and time to create the quality games that Steve is afforded. I understand that the business requires that the production line keeps moving. I get it, but I would rather have quality over the spinning wheels of quantity any day. Would this the be opportunity for a other designers to come to Stern and create new games? Would Stern be able to hire outside freelancers? Who knows? But I can tell you this. If Stern keeps releasing games of the quality that Steve Ritchie has been able to consistently produce with EVERY title, that would be the best for everyone involved, wouldn't it?

Update:
This game has stood the test of time and in some ways that is good, others... it's ok. The good, a relatively simple game to operate that makes money on location. The most complex mechs are a 3 bank of standups, a 3 ball lock sequence and a newton (butt-plug) battering ram. Where this game really shines is the code. A simple layout with 5 lanes and 16 shots total. There is a lot to do with this fan layout. Now here's the kicker. The pro is a better playing game than the LE/Preem to me. The upper PF on this game is a fan layout above a fan layout. And while the loop shot in the upper left is interesting, the upper PF is not that well integrated/utilized in terms of the ruleset of this table.

The code itself is another interesting aspect of the game. In competitive play, you mostly see Martell chosen. Even with the drawback of the choice of the house, the add-a-ball whammy to multiball play once per ball is SO POWERFUL, that most players feel like they have to choose this strategy. Every once in a while, tyrell or even baratheon (for a quick trip to hand of the king) will be chosen. Even more rarely, a truly brave player will choose greyjoy... but you NEVER see ANYONE choose Lannister or Stark. That's 1/3rd of your initial choices are out the door. right at the first plunge. Are there 6+ ways to play the game, sure. But competitive players will choose the one that will give them the best chance for a strategic win. Martell, all day long.

Is this game a success, yes. It is a great playing game with deep and complex rules that operators will collect with and tourney players will challenge themselves with.

I have the chance to play on GOT pro ( Festiflip 2015) with a not terminal updating ...My impression is "amazing" the ball flow is fantastic and sounds, music, playfield and glass/ cabinet make me remember "lord of the ring" revisited ...I love this pinball : I want it ! so ...Christmas is coming soon....

Played this game yesterday. I thought it was great especially loved the flow and smooth ramps.

Previous123456
There are 133 ratings (that include a comment) on this game. Currently showing results page 6 of 6.