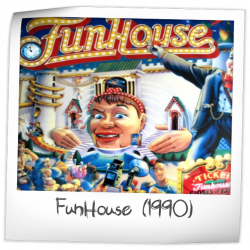 Note! There are multiple versions of this game!
This is "FunHouse".
The other versions are:

There are 409 ratings (that include a comment) on this game.
Currently showing results page 1 of 17.

This was my first pinball machine and I regret selling it. Rudy is the best - love how his eyes follow the ball. Love how he talks to you. Love how he calls everyone a different name. His character is one of pinball's best ever! Does it have all the bells and whistles that today's games have? No. But this is a classic and one of the most fun games ever made.
7.330/10
74 days ago
AOK

A far better than average game for its era. Neat innovations and toys. Doesn’t feel very deep though.

When put next to better modern games and other classics doesn’t see much play. A game here, a game there.
8.840/10
6 months ago
CGS

Who wouldn't love a pinball where you can make a creepy marionette head choke on a pinball with sounds to match!
8.180/10
6 months ago
JLB

I bought this game after regularly playing a poorly maintained game at the local arcade, now playing a restored version it’s totally different. Good theme, great call outs and now you can upgrade to Rudy 2.0!

As my avatar might suggest... when I was getting back into pinball in the early 90s after being mostly a videogame kid in the 80s, this game really got me good! Endless quarters. Rudy is creepy and incredible. So many people hate the disturbing aspect of Rudy but the fact that a pinball game can create such a strong reaction really says it all about why this is a timeless classic, and Lawlor rightfully a legend. Yes, the gameplay can get a bit repetitive, but Rudy makes up for that, big time, Biff!
8.100/10
7 months ago
???

Always a blast to play this, if for no other reason than to have creepy Rudy watching you. He reminds me of the ventriloquist dummy on the old "Twilight Zone."
9.280/10
8 months ago
C P

This is an excellent old school game for sure. Great playing and fun.

I like Lawlor designed games, but Funhouse just doesn’t do much for me. Rudy the talking head is innovative and his call outs are humorous, but it just wasn’t an interesting game to play. I think the objective is to move the clock to midnight and get Rudy to sleep, not completely sure. It has some interesting shots, but in the end, a couple game session is good enough for me. Whirlwind is the pinnacle of Lawlor games from this era (Funhouse feels like a System 11, but it’s not one). I don't get the upwards of $10k going rate for this machine. Would rather spend the cash on The Addams Family.

FunHouse is alright. The Rudy head is the best part of it, otherwise the game is kinda meh. I think the game is a bit shallow and boring once you have heard all the things that Rudy has to say.

So unique. It’s a blast to play. Getting heckled while you play is a lot of fun. Makes me want to bash his jaw with a few pinballs!
The logic works well and the shots are challenging and fun. Great for a pre-dmd game.
9.444/10
10 months ago
CHZ

Have really been enjoying this game. It benefits from getting to play it multiple times and get the hang of it. A little trickier on location. What can be said that hasn’t been said before about Rudy the talking marionette or whatever he is. Really makes the game and has to be one of Pat lawlors top achievements. Has the signature Lawlor third flipper shot and some satisfying ways to hit that shot. Overall a game that has grown on me over the years

Maskell has owned this game in the past.

I cannot see why people like this game. It's pretty repetitive. If they are scoring based on one of the first large heads... then ok. Maybe it was fun back in the day? I don't enjoy the theme or gameplay.

Funhouse?!
Okay, I don’t like this game. The playfield is excellent, shots are great, lots of scoring chances and multiball is crazy fun. I hate the disembodied head.
I am probably the only person who doesn’t call this one of the greatest games of all time, and I will give you a proper reason why.
I was not into the ugly trend, Garbage Pail Kids and that kind of stuff never appealed to me. Here’s a pinball machine with a Howdy Doody looking distorted head stuck in the playfield that talks. Hmmm, no thanks.
Theming is equally important as gameplay. You can have a great TV or movie license but if the playfield is a cookie cutter version of another game or less fun than the no name machine next to it, then the overall package suffers. The same goes if you have a great game but it’s theme is absolutely terrible. Several Gottlieb Premier games for example.
The exception to the rule is when you have collectors snapping up games because it has a certain designers name is attached to it. It instantly makes them the ones with that name superior to many much better games. Also $$$$$$, which is what that kind of thing is really all about. I know, I’ve seen it all before, I used to collect comics back in the day and there are some really bad comics worth tons on money because (insert name here) created it.
The difference though is that this is a really good pinball machine with a less than crowd pleasing theme. Now remember, these are just my opinions, there are plenty of Chuckie movie fans who would love this machine.
There’s nothing wrong with taking chances, trying something different, or appealing to a niche audience. It’s just surprising that Williams approved so many oddball games in the late 1980’s considering their main goal was to make profits for themselves and their buyers via mass audience appeal.
We are also lucky that they did allow those outside of the box games to be made.
That’s why Funhouse exists, and although I may not like it, I understand why it is so popular and why it is so desirable. If this is your type of thing you need to own this machine. I always play it whenever I see it on location somewhere, but I really have no desire to own it.
8.720/10
1 year ago
BRI

This really is one of the most classic pinball games ever made. Funhouse seems like a property that has always existed, despite only being in this single pinball game - which is a real credit to the design work.

The gameplay is really tough. The rules are archaic. But that’s part of the fun of the table, slowly uncovering the mystery.

After all these years, I still love this game. The rules aren't too deep. But, its fun and easy to understand. Rudy is hilarious and creepy all at the same time.

Dogballs has this game on the wishlist.

That SCREAM when you hit the trapdoor in multiball... hard to argue that that's not one of the greatest moments in pinball right there. Classic.

Funhouse hits the sweet spot between being easily understood and difficult to master - and yet, not too difficult. An intermediate player can see 99% of the game in a single, decent game. Would love to see one more bonus/wizard mode somehow laid over the top of what's there, then it would be perfect.

As it is, tons of fun, a lasting theme with a handful of satisfying solid shots, some great combos, and valuable Million shots available in multiple modes. Takes the fun factor of a System 11 game and really perfects what makes those games great. A chaotic lower playfield that you'll want to escape with clean shots to the upper playfield, pop bumpers well integrated into the scoring so you'll actually want to hit them, and the double bonus of the Mirror rewards and the Steps make plenty to shot for.

I personally love the music and the call-outs, but can see how they might be grating to others. Whenever Rudy calls me "Chucky" that's my cue to smash him in the chin.

Stands up to almost anything that followed it for the next 30 years, and that's saying a lot.

Game is Classic, fun, hard and long lasting / replay-ability! The game introduced a talking head... taunting the player and interacting with the player, sometimes encouraging and most of the time, with sarcasm humor. The shots are difficult, the options are multiple and fun. The two skill shots is unique as well. First Rudy's hide-away/back-door and then the steps left shooter.

All in all a great pinball machine.... I highly recommend playing if you've never played it.

RKip455 has owned this game in the past.

A must have for anyone collection pure fun a classic

big-c66 has this game on the wishlist.

The novelty of funhouse has worn off for me but it’s still an undisputed classic and Rudy is an incredible feature.
3.479/10
1 year ago
???

Owned this and Whirlwind, WHirlwind is still here and FH aint. FH is too repetitive a loves to breakdown on a monthly basis. I have yet to see a owner get the dang head to function in the proper manner. "Im sleep and gettin mad" BS is for the birds. Plainly just not a keep nor is it worth the $ it fetches...seems 2 be a esteem thing i guess to own one of these.

Something about this game is fun. It's def unique. The placement of those hotdog targets are weird. I do like the orbit path. It's not obvious to me where it actually goes. In general, the main shots feel great. I think the clock aspect is cool, though sometimes it feels tough to advance. But it's always fun hitting Rudy's mouth just to annoy him. There is a lot to do in the game, especially for it's age. The sounds can be repedetive, but it's not enough to stop me from playing. One of the better system 11s imo, but it's also of the last ones. It's also one of the best carnival theme games imo.
7.785/10
1 year ago
???