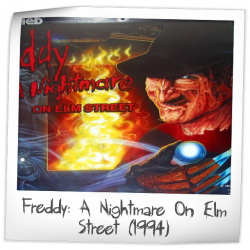 There are 59 ratings (that include a comment) on this game.
Currently showing results page 3 of 3.

Freddy is a game I have only played a few times. I will start out by saying that the game I played was not in the best operational condition. Please take this review into consideration with the last statement in mind.

The Pros:
One of the best art packages by Constantino Mitchell. The red DMD looks great on this horror theme. The PF is nicely laid out esp. the upper right hand side of the deck. The oven and the captive ball are both great shots. The ball barfing out of Freddy's mouth is a great effect. Both claws are interactive. The ball save claw is awesome. The Ramp claw really should have been a flipper that made the shots in the upper right. 2 standups, 1 oven and a captive ball to score up there. The audio calls and animations are ok, but nothing special. The pf shots from the upper flipper are varied and well done. The shots in the upper right hand corner of this table require SKILL!

The Cons:
The above mentioned pros need to work. For some reason... I have real trouble finding a copy of this deck that does what it should.

The Takeaway:
The theme of the game is very well implemented. Collecting souls and staying awake The character of the gameplay is very stop and go. I remember the scoring being unbalanced. However, I need more time with this game in tip-top functional order before I'm going to alter my play rating. I like this game, but really need to session this game out when it is playing as it should. Then we shall see what Freddy is really made of. A great table to play on Halloween.
7.812/10
8 years ago
DRC

I owned this game for over 3 years and enjoyed it a lot. The theme and the game in general is a darker pin, which I really liked. The sound and the quotes (from Robert Englund himself) are great. I love the way Freddy taunts you in the game, his mouth moving the whole time. I have had many of my friends kids and my Goddaughter and Godson attempt to play the machine who know nothing of Freddy at all. By the second ball or so they are starting to walk away a little scared usually (so funny to watch). The game is not that deep but I really enjoyed my time w/ Freddy.

vtec16 has owned this game in the past.

Typical Gottlieb junk from the 90s. I played this at PAPA 15 and thought I was in for a treat but I was wrong. I played it once and was completely bored. Absolutely no reason to play this game twice.
8.380/10
8 years ago
ERG

Freddy, I will start off by saying that I might be a little biased as when it comes to themes, this is a dream come true for me. I think the incorporation of the theme is excellent as many of the ideas of the movies are represented well in this game. The call outs are great. The game is a little dark but with a well placed spotlight it is easily remedied. It has a nice variance of short and long shots. Multiball ranging from 2-4 is pretty cool as well. I think the playfield is layed out well. If you are a fan of the Nightmare movies you will easily like this game.

PINBELL has owned this game in the past.

Very dark game. Too dark. I would add some spot lights if I owned this. You can barely see the Freddy head. Artwork is ok. Videos are blurry, kinda like SM and IM. Game play is actually not bad. There are some long shots and short ones. Game flow is disrupted by the use of VUKs instead of ramps. Ruleset isn't deep but still is fun. A lot more fun than I thought it would bethough not good enough to make my wishlist.

Love the artwork! Sound and animation are good. Gameplay isn't terrible. I would definetly own this one again.

britrex1 edited previous rating on November 04, 2014.
britrex1 has owned this game in the past.

I absolutely love this pin's theme, and the machine uses it well -- especially with plentiful sound samples from Freddy Kreuger himself, Robert Englund.

The ball-spitting Freddy head on the upper playfield is brilliant, as well as the "claw save" feature in the main drain.

The "claw flipper" is a neat idea that's poorly implemented and I find that there's a bit too much multiball, but overall, I think this game is a blast to play. The playfield doesn't have the abundance of toys and whatnot that most other games of the era have, but I think that's one of the game's strengths, as an open playfield can be a good thing in a pin. (It's nice to play a pin where your ball doesn't disappear for 5 minutes after you launch it into an abundance of toys.)

Fatsquatch edited previous rating on March 21, 2013.
Fatsquatch has owned this game in the past.

This is a machine I remember from my youth. It does a great job with the Nightmare on Elm Street theme. I think it is fun great voice work and has some cool features on the palyfield. It does not have the depth of some games but I think it is a fun machine to play.

Previous123
There are 59 ratings (that include a comment) on this game. Currently showing results page 3 of 3.