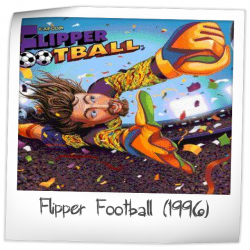 This game has received 23 approved Pinsider ratings. 2 more approved ratings are needed to get a rating and for it to be eligible for the Pinside Pinball Top 100 ranking.

Many mistake this for a regular pinball machine which it is not.
This falls in the Bat and pitch realm of a sports theme.
Do not judge this on a one player game as it is quite boring.

However get more than one player and let the fun begin!
Some have called this a drinking game and I have to agree.

After putting many games on this with my family I hsve to say this is amazing!
Definitely the most fun multiplayer machine I've ever played.
It stirs so much emotion when you're trying to beat your competitor.
Anger, frustration, rising heart rate.
This game brings out the competitive beats I'm my 14 year old.
He literally screams at the machine some times.
Other times he taunts me claiming he's the best.
None of us are soccer fans however Dang this is A-blast.
It's fun from the start but the more drinks you have the more it becomes majorly entertaining.
This is the only machine that I have purchased that my wife thanked me over and over again for buying.

This is a huge factor as I have been in the hobby for over 15 years and she's constantly nagging me about buying machines.

The call outs are hilarious, the entertainment never ends because you're constantly trying to beat 1 another.

Thank you to Capcom for thinking outside the Box and creating this wonderful treasure.
Glued to the floor do to condition and rarity.

The quality of Capcom always blows me away and this game is no different but the game rules fall flat in single player mode and the layout doesn't have a lasting power.

davideokills edited previous rating on November 13, 2019.
davideokills has owned this game in the past.

Friend of mine has this machine. It is misunderstood. Completly misunderstood.
This is not a machine for a single player. It doesn't have complex rules, modes, depth, anything. It is not made for tournament mode or even for playing sober.
This is a party pinball machine, in my opinion the best there is. To make the most of it you need 4, or better 6 guys and a sizable supply of beer.
It has a very fast player rotation and groups the players in two teams playing against each other so it never gets boring, after sufficient alcohol intake people start cheering on their team mates and high fiving each other at every goal.
The dots, they are awesome, the callouts are funny and never get old and this poll needs another category for filthy language just for this game in which I give it a 6/6.
I don't even like soccer but unlike WCS95 which sounds like the commercial stuff this, at least, sounds like real soccer. That's why I give it 6/6 for theming.
6.603/10
8 years ago
DEL

Not into soccer. The layout is wierd and some things just seem to be there to take up space. The lower half of the game is pretty much empty and there are no outlanes. The game is timed and when it runs out, the game is over. Unless you just plain suck. Not sure if the game will run out if you drain 3 times as it didn't happen. The whole point is to knock the top 5 targets out of the way so you can score a goal. Not my type of game.
3.518/10
8 years ago
TPK

Not a winner in my book. Ranks below slow weak flippered em's decades before my time.

You just have to love soccer to really get into this game and I do not.
It is simple and kinda linear and it's dynamic but has a unique fun-ness to it!

Wasn't too sure about this machine when I saw it at the Pinball Museum in Maryland. I gave it a try and got sucked in to the game of scoring goals against the opponent. I ended up playing about four games and felt the intensity during every game.

One of the neat features is that the machine will add the goals you score to your total if you input your initials and birthdate after the end of a game.
1
There are 7 ratings (that include a comment) on this game. Currently showing results page 1 of 1.