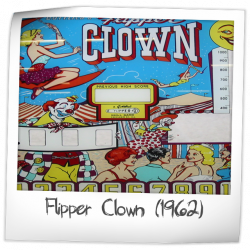 Clowns and pinball what could go wrong? Surprisingly fun game.
8.479/10
8 months ago
ZAC

Love this game, unique ruleset for an EM always keeps you on your toes. Wish the roto targets were a bit less drainy

Everything about this game is gorgeous. The backglass with carnival theme and clown carnival bell ringer is brilliant. The playfield is colorful and the chrome shield over the rototarget is spectacular. I love the game play, the pop bumper action and those gorgeous caps make me wish I was born 20 years earlier. And yes, this game is brutally hard. Maybe that why I can't stop playing.
7.433/10
4 years ago
RHO

All of the games in the "Flipper" series are okay, but I find something special in Flipper Clown. It is an early example of the player being put into direct competition with the machine--trying to beat the machine's number (red, left hand side) with your own number (white, right hand side). There is a lot of strategy that goes into playing this game, when to lock in the machine's number and when to cash in your own number for the added ball. I'm not really into clowns, so the artwork is a wash for me. The backbox animation is cute, but it really has no bearing on points...it's just some movement meant to catch the eye of perspective players. I'd classify this as one of the great wedgeheads of the 1960s, and I'd choose it over Buckaroo/Flipper Cowboy/Cowpoke any day of the week.
7.518/10
6 years ago
DEF

Flipper Clown is a fun game where the main goal is to hit the white and purple rollovers such that the white number from the roto target exceeds the purple number. After both numbers are made, if the white number is bigger, you get an add-a-ball. It's a game that involves some strategy, luck, and careful nudging to do well at. It's also hard to get the ball back into the upper playfield, so once the ball is in play on the lower half there aren't many shots you will make that give you a break in the action. I'm not usually one for EM themes, but clowns aren't the worst and the artwork is very good. Backbox animation is always cool to have.

This was my first flipper EM game and I'm happy I chose a good one.

Update 11/17: Eh, after owning this a while it's not hard getting back to the top of the game, there's plenty of action all around this game.

Flipper Clown is game from the great mind of Wayne Neyens.

The Pros:
Do you light your pops or go for a lit lane at the top of the PF? A great "Beat the score" column feature that plays a bit like blackjack. Beat the score on the left column... get an extra ball. This deck is filled with Add-A-Ball goodness! The post between the flipper lanes makes sure that you can nudge for the ball as well as flip it. Great action in the pops. The sledgehammer wielding clown in the Backbox is way sweet!

The Cons:
The Roto Target is deadly to shoot at. But ya gotta do it! Getting the ball back into the upper PF is the hardest thing to do on this game.

The Takeaway:
A great looking game that will keep even the most jaded Attack From Mars pinheads entertained, once they know what to do with the ruleset. This deck is a player!

Update V1:
That little rectangle in the middle of the glass is to grease-pen in your high score. My opinion of this game really hasn't changed. Nudging skills are king and getting the ball back into the pops is never easy. All that is left is to shoot for the roto target. building and collecting the numbers 10x from the targets is a rush and the add-a-ball sequence is interesting as the number on the right hand side of the roto-bonus ladder has to be higher than the one on the left hand side. I absolutely love the BG animation that happens when you achieve this feature on the game. This is what they mean by the number to beat on the left and the player's number on the right. Very simple, never easy, and sometimes... downright brutal. The funny thing is that the last line on the rulecard says:

Flipper Clown is fun game with a neat back-glass animation consisting of a clown figure hitting a carnival bell ringer which then launches a ping pong ball up to ring the bell. It has a center spinner that changes the right and left score values. When the right side is higher than the left, a ball is added and the clown hits the bell.

aahgo has owned this game in the past.