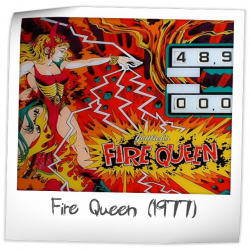 I enjoy the theme of the game, do wish Fire Queen was re-made as a SS pin.

The artwork is nice, and is especially excellent from it's era. Probably one of my favorites. Fantastic back-glass 6/6.

Take into consideration I give EMs a lower score because they lack the typical sound effects found in SS games. The music & sound effects are very important to me, I included it in my rating. I did not exempt them from the rating just because this is a EM. There is no music, which is understandable on a technical level, but I can't take the repetitive bells, chimes and dings the game cranks out.

A solid 1970's Gottlieb pinball machine. The rules are straight forward. Two features I like is the progressive (1x to 5x) a 1,000 scoop increased by the green drop targets. This shot mostly depends on luck which makes it a little more exciting. Also the 5 rollovers that bring the ball back to the top of the playfield. It's nice to have an expressway to the top which can reward you based on your shot. It's easy to hit 3 on the way up. 4 is a bit of a challenge and I have yet to hit 5.
7.578/10
3 years ago
CAH

Fire Queen, the two player version of Vulcan, is superior to its four player brother for two reasons - one of the most gorgeous backglasses in pinball, and with only two score windows, more of it to see. The game plays fast, and an extra ball is just four drop targets and a stand-up target away, but hitting the stand-up target takes good aim to avoid a drain. The game is simple but moves fast. Only 970 units compared to over 3,500 for Vulcan, but get the Fire Queen, especially is you only have room for one or two EMs. A 1977 pin that Gottlieb should have been making into a SS instead of Cleopatra.
8.821/10
4 years ago
MLF

This game has decent flow with the lwft loop shot getting back up to the important numbered roll overs. Collect the 4 green drops, extra ball shot, then double your bonus with all white drops down. Scores climb quickly if you can achieve this. Also, the novelty of scoring a special on hitting the last lit number on the outlanes is a fun surprise. Sought after for good reason. Gottlieb got it right on this one.

Game is unique, but too easy to beat. Got rid of it a few years after having a real nice example. Pretty game, and liked the special target feature.

Dono has owned this game in the past.

A solid game from Gottleib that plays rather generously.

The Pros:
Great shots and action all over the PF. Gordon Morrison makes that fire queen look great! The whole art package looks vibrant and keeps the excitement high. The orbit on the left side of the PF is a great shot and the four lanes at the top require a soft plunge and nudging. Great angles on the drop targets to make sure the ball travels all over the entire PF. The curved metal rails on the outlanes in conjunction with the sling angle and lower inlane/outlane post mean ball control is a high priority.

The Cons:
Hitting drops to an extra ball all day long can make for extremely LONG game times. Is there and adjustment for this in the game rules somewhere other than just turning off/disconnecting the extra ball target? I always thought there should be another bank of targets under the extra ball standup... what can I say... another bank of drops on a Gottleib game is something that I like.

The Takeaway:
Another Krynski classic design. A good player for the pinhead looking for a classic and relaxing game.
9.239/10
9 years ago
QXZ

This is my favorite machine! There's just one thing I don't like about it. The scores required for replays, are just not in line with the way the machine plays. I know I can improve, but I currently hold the high score on this machine at The Silverball Museum/Arcade in Asbury Park, NJ at 160K. and you have to score 110K for a replay. If I was pumping in quarters, I'd have to give up on it.