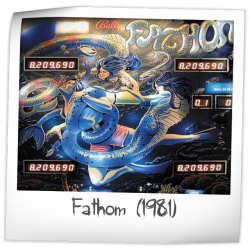 There are 71 ratings (that include a comment) on this game.
Currently showing results page 1 of 3.

Up front, I am fond of early Solid State games. Fathom ranks at the top in my humble opinion.

I love the inline drop targets. The task of knocking down barriers for a greater reward is very satisfying. Drop targets appeal to me in general and adding in two banks of the standard variety along with the double inline targets gives us plenty to aim for.

Good shot options. Hitting the left orbit shot to the inline drops/saucer with either right flipper makes me smile. Good spinner shot. I like spinners as much as I like drop targets and this one is well placed/directs the ball nicely to the A-B-C rollovers. The only clunky shot I find myself hitting is the area between the right pop bumper and outside edge of the Cave Trap. Every drop target and the standup can be hit with a well aimed flipper shot. . . I just need to work on my aim ;).

Artwork is amazing -- the backglass, playfield, and even the cabinet draw you in and provide a treat for the eyes. Enough said.

Sound is very good, especially considering the era and compared to my other games of similar vintage. The speech incorporates well with the sound -- not sure if its normal but my game provides a lot of "Ahhhh"s.

Lighting is decent. A little dark in the middle of the playfield but translucent rubbers help.

Scoring and gameplay seem to consist of two parts.

Scoring involves collecting playfield points but a good score also involves a well built bonus. Luckily you have two area of bonuses to build and multiple ways to multiply it!

Gameplay has a right/left or green/blue feel. Using the large drop target bank and center 1-2-3 target bank to build your blue or green bonus ties the two sides together. Hitting the 1-2-3 in sequence lights the yellow standup. . . but can you hit it in time? I appreciate like the additional features provided by the A-B-C rollovers and the fact the letters can be moved with the flippers. The inlane/outlane reversal is a fun mix up of the usual anatomy in this area. Multi-Ball is great; the fact that playfield scores are doubled/tripled during makes achieving and maintaining MB worth your while.

I really do like this game. No ramps, no DMD, no modes. . . just classic pinball. It is a treat to look at and a blast to play -- very glad to have the opportunity to restore and add one to my collection.

I had one for awhile. Pretty game with the blues and greens. For me the play was so-so, and I quickly tired of it. IMO it is overrated. Again, beautiful, but far from a total package.
8.884/10
11 months ago
TKM

Gorgeous game! It has that old-school charm. It is easily one of the top early SS games. It is a blast to play and it has that "one more game" feel.
6.529/10
1 year ago
ADM

Having read all of the hype with this game, I was excited to find one to play nearby. I must say that I was a bit underwhelmed, and maybe that's the reason for my scoring - I may have been more generous without the lofty expectations. I feel that the game plays a bit too slow for my taste. I also didn't find it all that enjoyable while I was playing, though some of that may have been due to the setting (a bar). I'll give it another go if I come across it elsewhere and see if my impression changes. If so, I'll be back to edit my review for sure.
10.000/10
1 year ago
BR

Fathom is a beautiful game that should be in every early solid state collection. Multiball and speech are great in this game!
9.295/10
1 year ago
MPW

Just became the proud owner of one of these games. Played one in mint condition at pinball at the zoo in 2018 and loved it. Took almost another year to aquire one under $5000. If you appreciate the early Dawn of multi ball talking pinballs,; whereas, the entire goal is to achieve multi ball, then Bally fatham is right there with firepower! I have firepower and for the longest time couldn't appreciate the increased cost to fathom, but if you collect early solid state pins as your hobby, having a fathom is required in your collection. Great game and even better shots, unique outlanes....Fathom!

One of the brightest points of Bally's super, super hot streak of the era and a game clearly designed by people that understood inline drops are the greatest thing ever. The game also looks amazing. Fathom came out within 4 months of Centaur and Medusa. Can you imagine if 3 works of art were released in such short succession today? 1981 was really the good old days.

"Fathom" is everything "Paragon" wasn't -- a great theme and art but with better audio that goes far beyond "bloop" and "bleep" and much better gameplay thanks to a reduced playfield and the removal of the awful "double right flipper". This one had interesting "water" or "wave" sounds as you played and a voice that taunted the player as they played. It's dated as hell but one can tell that effort was put into it with great targets and a rewarding set of shots that actually work thanks to much smoother gameplay. Even in the dark, the lighting makes this table look great in a gameroom.
6.977/10
2 years ago
DIA

Great art but game is WAY to expensive for what it is. Sounds are also very annoying to me.
9.639/10
2 years ago
CRN

I know I'm in the minority but I just can't get into the gameplay. Better than flash but not near as fun as the system 9 and 11's of its era. Backglass is really cool.
8.862/10
2 years ago
MIK

When you look in the pinball dictionary this should be the example. It's a Classic for sure just on looks alone and the game play holds up to its looks. The 1st game even my wife said "wow that's a nice looking game"

Plain and simple fun! The gameplay is so easy to learn, yet near impossible to master. The art is gorgeous and the theme of mermaids and sea nymphs drowning dudes is genious! I'm normally not a huge fan of early 80s pins, but it just doesn't get better than this! Just make sure to have other games around however, as even though I owned a near perfect example of the game, it just doesn't hold up in the "lastability" category. It gets a bit boring overall...

Fathom is THE classic Bally SS title. Multiball, two bonuses, two banks of inline drops, what more do you want?

This game is so much fun. It offers a challenge, which is what I love in a pinball machine. The best part about this machine, however, is the artwork. It is GORGEOUS. Seriously. I don't say that about a lot of machines.

Excellent game. Another simple Bally that can bring you to your knees. Beautiful as a pinball can get.

I recently had the pleasure of fully restoring a Fathom. I didn’t get too many games on it before the restoration because it didn’t work well when I got it. I knew it would be a good game from all the positive comments of others; so I just dove in with restoring the playfield and cabinet. It came out way better than expected and plays silky smooth! As expected, the game play is great all around. Rules are easy to understand, shots are challenging and multiball is rewarding. The artwork on this game has got to be among the top for Bally.
Since finishing my game, I’ve played others at shows. There is a huge difference in a player that isn’t tuned well and a minty example.

This game back in its day was pretty awesome. For me it has not aged well however compared to modern Solid state games. I guess I like 90's+ games with speed and toys. This game has neither. It's a looker, not one I would want to own however.

Pros
The backglass and playfield art are fantastic

Cons
Cab is bland
Sounds and lighting are typical early 80's, does not age well
Gameplay is slow, but appropriate for its time
8.476/10
3 years ago
S V

Greg Freres really outdid himself on this one with all aspects of artwork on the playfield and backglass.
It not a surprise the playfield and backglass have been reproduced, as the PFs were beat to $#@! on most games.
Gameplay is challenging and extremely satisfying with the inline drop targets.
Interconnected left bank target memory AKA Eight Ball deluxe which score inlines as well.
Good voice speech for the age.
Simple but memorable, "d-lup" water background tune.
Very collectible for a reason.
First price spikes were all the way back in the 2000, long before PinSide.

A must have if you like Early Bally machines, even if you have to build your own.
Collector quality examples are not going to be cheap now.
7.958/10
4 years ago
SAP

Fathom is one of those games that no one noticed for a long time. It was available to be picked up for a cheap bargain in fact. Then somewhere along the way, someone noticed the fantastic art package and the decent gameplay, and the price skyrocketed through the roof.

Personally, I love the way this game looks! It's beautiful. But ultimately, I'm much less impressed with how the game actually plays. I've played two copies of this game now and I felt that what looked to be a great layout left me wanting so much more. It feels clunky to me, the shots don't feel quite right, and it even lagged a bit IMO. I really wanted to love this game but ultimately the gameplay is a turn off for me.

UPDATE: Played this one a few more times recently, and I'm getting it now. It is a truly addicting game ("I was SO close to getting that multiball!!") that demands one more play. Not a huge fan of the way the early 80s Bally flipper system feels (it does feel like it lags a bit, like you have to time shots differently than other games), but that's a minor gripe. The only design flaw I can find in the layout is the shot straight to the top right bumper. Not sure what Ward could have done with that space, but that spot feels like a waste. Cool game!

I would love to have this machine. Beautiful game.
Next123
There are 71 ratings (that include a comment) on this game. Currently showing results page 1 of 3.