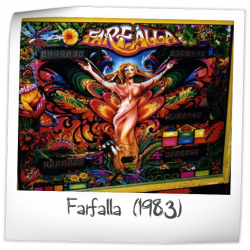 It’s hard to believe that Black Hole (played on Pinball Arcade) is older than Farfalla!

It’s an attractive pin, but the Farfalla I played at FlipOut was sluggish and boring. It felt very similar to countless other pins from the same era, except for the stunning artwork, and I had no desire to play it again.
7.576/10
10 months ago
PGR

Even for a Zaccaria game this seems extra stoned. The day-glo candy colors on this leap off the playfield and can probably be seen from down the street. Very creative cabinet for '83. Speaking of 1983, I'm not sure why a hippyish theme at that late date, but you could do worse. It's a theme like Gottlieb would've had in the early '70s, but, again, more stoned.

The layout is weird, but of course it's weird, it's a Zac. 6 flippers, 4 pops, and 17 drops! Upper playfield! It's mostly about hitting those drops until you can lower the ramp, then getting the 6 drops on the upper playfield, then the special up there. Not the smoothest shooter, but there is a ton to shoot for both far and near. I like it, but a bit too clunky to love.
8.223/10
1 year ago
TOM

the react flippers and the upper playfield really set this apart from other games.

Its graceful yet can be blisteringly fast at the same time.
I really enjoy playing this game.

Nipples. There's no way around it. Were you to look at the playfield of this game you'd see a modestly fun game that looked like it was geared toward very young girls. As the eyes level out and meet the back glass however two points become very obvious and just who the game is meant to attract becomes muddled. With that out of the way this game is fun but not great, it has that typical Zaccaria feel to it. Like a lot of those machines the art work gorgeously pops while the game play seem somehow lacking. It's still pretty fun though. Just hide the children's eyes. Just kidding.
7.803/10
3 years ago
DEF

Great looking pin with a great layout. LOVE the backglass on this one and the playfield is very colorful (although doesn't really compare to the backglass). Probably my favorite Zaccaria to play over and over.
7.802/10
3 years ago
DJB

Farfalla is definitely the most colorful Zac. I wouldn’t say the playfiled art is the best of for zaccaria, but that backglass has to be near the top. I’m not really into the hippy/love theme of the game, but it sure is attractive. The game also has lots to shoot for with multiple drop banks on the upper and lower PF. Rules are similar to most zac games: shoot the color target to advance that color towards a special.

Beautiful and colorful art on the playfield and backglass, cool speech and call outs, neon tube in the backbox. This game has lots of great features and is probably one of the best Zaccarias in bith game play and art.

Wanted to like this game because of upper playfield, but just can't get past no multiball, and the theme in my opinion is horrible. Must of been a weird mushroom trip which was responsible for the artwork. Any other theme and I'm positive this deck would be 8+ rating for sure. I love the early 80s SS games, for the most part they are consuming the majority of my collection, but this game won't earn a spot in my stable. I'd rather have a redundant second black hole than a farfalla. Same reason I don't have a haunted house in my collection....game wasn't designed for multiball...I'm not interested. Not to say....I don't have non multiball ss in the collection meteor. Just need something more to work for on a deck. Gameplay is good though, flows well.
7.962/10
4 years ago
FBA

Probably the greatest art work on a game ..It's quite fun with alot of cool features..Upper playfield is cool with a great use of time ball feature..This is a zaccaria masterpiece

Deerlakes6 edited previous rating on June 05, 2017.
Deerlakes6 has owned this game in the past.

Beautiful with a fantastic gameplay. Unique, magic with a subtly chemical touch, classy, rare, splendid. Simple, perfect game. Among the very very best ever created. Its incredible how Zaccaria managed to condense in this machine the very essence of pinball. Replay factor: 100/100. Also the sounds: usually pins from this era have dreadful and annoying sounds ( enjoyable only because of nostalgia) but in Farfalla really those eerie drony sounds create a beautiful feeling, I would not change them even with the best modern movie soundtrack. I really L-O-V-E it.

Without doubt the best pinball ever produced by Zacharias, game plan and backglass of extraordinary beauty.
8.641/10
6 years ago
YOS

Arguably the prettiest game ever made. It has plenty of drop targets and the unique flippers on the outlanes. You snooze you lose. Those things are difficult to time exactly right as they only work once right after the ball enters the outlane. I got good enough that I hit about half of them but timing is the key.
Getting to the upper level can be challenging. The upper level is pretty easy, I usually clear out all drop targets but you have to be quick as your time on the upper level is limited. Eventually the upper flippers will quit working and the ball returns to the lower field.
4 bumpers and 2 sling shots provide plenty of action, flippers are strong on the stroke but weak on hold which makes the ball recoil if it hits an up flipper going fast. Pretty challenging game overall that keeps me coming back for more.
The sound is OK, not annoying but nothing to write home about either. It's in Italian but I finally figured out what it is saying to me. It has 2 distinct voices, a male voice that insults you if you play poorly (It not all bad luck, no comment) and a female voice that compliments you when you did well (...I like to play with you).
The overall build quality of this Zaccaria pinball is better than its US contemporaries. Pretty well put together machine. Also the field is holding up nicely. It won't leave my collection any time soon ;)
Update: I had this machine for a while now and it still gets as much playing time as Attack from Mars or ACDC. One of the best pins ever made.

Best-looking backglass of all times? (talking about the European version of course...)

Regarding gameplay, my preference is for Pinball Champ over Farfalla... but the later is much nicer and has these outlane flippers which are very, very difficult to master: very cool "toy"!!

jlm33 has this game on the wishlist.

Maybe the prettiest looking pin out there. Fantastic art package. Gameplay is ok, but art is amazing,
8.897/10
9 years ago
GOO

Absolutely gorgeous game. Some have said the artwork is too feminine, but it doesn't bother me at all.
The molded insert, neon tube and outer backglass give the game a dimension that makes it stand out from other games. This can be said for all Zaccarias of the time.
Game play is awesome . . . plenty of drop targets. Out lane save flippers are unique and sometimes difficult to master.
Great game overall . . . one of my favorites!

Farfalla may be the best game Zaccaria ever designed. It is one of the best pin tables out there... if you can find it.

The Pros:
Where do I start.... The game is laid out beautifully. Shots that require skill are all over this table. If you include the outlane flippers, there are 6 on this table. 4 pop bumpers and a simple upper pf that requires your attention and skills just to get up it. Bonus x is king on this table. The art package on this game is out of this world! Italia culture in the artwork means that different priorities and sensibilities are applied to this package. Just because it doesn't say "Muricah" doesn't mean it's not made out of awesome. Perky pin-nipples (in 3D) are always a good thing. Lorenzo Rimondini is the Italian Dave Christensen to me.

The Cons:
Finding a copy of this game, much less your spare parts... and keeping your outlanes lit at all times.

The Takeaway:
The simplicity of this game underlies the fact that the game is mode less and not so complex that you get lost not knowing what to do whilst (yes, I said whilst) playing it. This deck is incredibly accessible and considering all that you are doing is scoring points, makes this a very different feeling skills game. I gotta hand it to those wacky eye-talians... This is a damn fine looking and playing pin- deck. Gitcher' game on because this butterfly is a true player.
7.971/10
9 years ago
???

Zaccaria made some real nice machines, Top Speed, Locomation, Devil Riders to name a few. But Farfalla was their best. Amazing artwork on this pin and great playfield design. Original to say the least, with its proto female fantasy thing going on. Girlish yes, but artistic. A real gem.

It's excellent in many aspects, especially the sexy female Italian accent voice... this is one of my favourite tables ever, I can't think of a single thing to say against it... the artwork is stunning, if a bit drug inspired, the sounds are awsome, 6 flippers (if you include the outlane save flippers), an upper playfield with several DTs and a movable ramp to get there, neon light in the backglass with moulded 3D art... not only can you see the large breasts, you can feel 'em!! ;-)

This is an interesting game. I only ever had the chance to work on / play this game a few times. We had one on location in a bar in Daytona Beach and I had a few service calls on it. Overall, the artwork is very nice (kind of strange, but nice). The playfield lighting was well layed out and had nice sequencing. The sound wasn't bad. If I remember right, it had speech also. Also, I didn't remember this, but I just looked it up, the game has 6 flippers. I do recall their being extra flippers... Overall, I nice interesting pin. Not overly fun, but not bad. Well worth having for the right price. I guarantee it will be one of the most unusual pins in your collection!
By the way "Farfalla" is Itallian for "Butterfly".
1
There are 21 ratings (that include a comment) on this game. Currently showing results page 1 of 1.