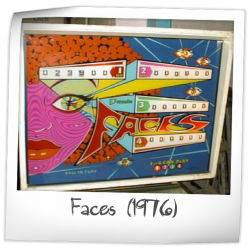 This machine is a fun shooter!
Love the spinners

I love Segasa-Sonic games. I alway have fun flipping them.

JustEverett has this game on the wishlist.

Not an easy game to get ahold of, good layout on this pin and you can get some nice shots with the 3rd flipper. I love the psychadelic backglass and playfield on this game. The cabinet artwork doesn't do it for me though and unfortunately the cabinet is made out of particle board. Besides that it's a fun game and a welcome part of my collection.

FACES is certainly an interesting game with a layout oft compared to Grand Prix (WMS) and Sonic did use WMS style parts. The open gate on the left makes for an interesting orbit to flipper shot and timed right you can return the ball right back through the spinners. Lighting them by advancing the bonus to max really gets scoring going but the game is all about bonus. Going to mod my game for tournament so that it grants points instead of extra balls as the reward for collecting faces.

shimoda has owned this game in the past.

Great artwork on the playfield and the backglass, straight acid trip. Lots of bright colors. Tons of stuff to roll over not his one, third flipper is done well, lots of shots on the one, specially for an EM. Would play anytime I see it.
9.051/10
8 years ago
ZUL

You don't see too many of these games in the US and that's a shame. This is a fun table.

The Pros:
The artwork is surreal. Acid trip theme with the Afro-sheen-shroom-heads. This layout reminds me of Grand Prix by Williams with a few extra lanes and an extra flipper. The PF with the clear coat on it plays FAST! Double Bonus (Grand Prix) makes your shot selection a well defined choice. The faces on the plastics, esp the eyes and the mouth on the upper PF are cool. The upper left rebound at the top of the PF has an option to rise making the right spinner an around the world orbit shot feeding to the right flipper, light the right spinner... rip it from the upper flipper!

The Cons:
The lower lane on the right is kind of useless, It could have been a cool skill shot (Bonus Collect!), but it's just not worth much. Finding this table is not an easy task.

The Takeaway:
A really well done and different EM game from those wacky Spaniards. In some ways an improvement on Grand Prix!

Update:
PAPA time is in full swing as was this deck. The one way gate at the top of this game can bounce the ball back across the arch and back down towards the upper flipper. Note to self. Rip the spinner to the right instead. Hitting the A and B standups for double bonus is an absolute must. Spelling F-A-C-E-S is great if you want extra balls and specials, but it seems to come with time and is not something that you need to aim for. Putting the ball up in the pops is not a bad idea as the standups there are a great way to build your bonus quickly. I am respecting and liking this game more and more as I play it more and more.