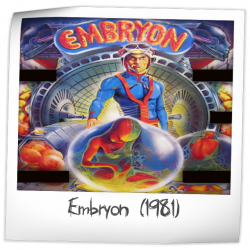 There are 48 ratings (that include a comment) on this game.
Currently showing results page 1 of 2.

My favorite Bally widebody. There is just so much to do on this playfield. You can spend time just banging out letters for embryon or focus on the top right or left of the playfield. This gives you safer options to earn points and extend playtime. I love the artwork and theme. My only complaint is how dark the playfield is. I don't know why the pop bumpers and other parts of the field aren't always lit up to show off the beautiful artwork. It seems wasteful to have the lights only kick in during parts of gameplay.

I enjoy the difficulty (for me) of obtaining multi-ball but wish there was a greater incentive to go after it. Due to the widebody and layout of the playfield you can have 2 balls completely separated for quite awhile. I just wish the scoring was effected by the multiball. Absolutely love this game.

One of the best looking classic Bally pins. Science fiction art in pinball is always a welcome sight. Playfield has a good variety of features, but lacks any real interesting shots that tie it all together. Still an interesting pin that works quite well in a larger collection.
8.536/10
1 year ago
REW

Just fun pinball here, art is amazing and tons to shots, objective is simple to understand but hard to accomplish

Alot going on and alot to shoot at. Interesting to unlock multiball but I wish there was some scoring benefit during multiball. Awesome artwork.

Back in the 1980s, this game was considered somewhat of a turd.
In some ways, it still is unfortunately.
This is NO Eight Ball Deluxe.
Today, it has gained more of a cult following similar to games such as Fathom and Centaur.
In the close follow up of the "Super widebody" concept of games like Paragon, in order to complete with Gottlieb titles such as Genie, but it did not fair anywhere near as well in the market.

Overall, the artwork is eye catching, but the gameplay is slow, even if highly waxed.
I don't know what people are talking about in this area, since I have owned several examples.
The ruleset is a bit confusing without doing some research.
I have always liked the double captive ball strikes in the center of the playfield and the drop target bank in the right corner.
Most people may not realize there were actually THREE different backglasses made for this game.
The standard production games had a deeper purple tone, the early productions a lighter red purple.
The prototype had a different center artwork from the original artist, Tony Ramunni, of Black Knight fame.

I have owned two different Embryons.
The first was a routed machine, with typical minor wear in the right corner inserts.
The second was a "infant mortality" perfect example game that spent less than 3 months on route before the MPU -35 blew up and it was put back in the box for nearly 15 years before I bought it out of a warehouse. Once again, different time, and lack of interest.
Just recognize what you are buying on this title, play the game first, you may not like it in comparison to standard width games.
Keep your wallet in your pants and evaluate.

Great game with beautiful art. Only downside is that the only game sounds are really just a repeated pulsing. Which does fit the game nicely, but doesn't really enhance your experience. Probably the best widebody of that era I've played

Maskell has owned this game in the past.

My favourite early SS. Lots of things to shoot for, a very interesting inlane/outlane arrangement, three captive ball features, a "mystery" award on the upper drop target bank, and multiball. The rules are surprisingly good for this era, and the ROM revision that doubles scoring in multiball fixes the only issue. I love the 80s sci-fi theme and the beautiful art style. The speech is very cool and the rest of the sounds are nicely done, with none of them ever getting grating (the background sound is nice and subtle). An underrated classic.

jaemsdavit has this game on the wishlist.

Embryon is a smorgasborg of things to shoot at and places to be. Widebodies can often be considered boring but just about any surface you hit has at least a 10 point score. I love the art, gameplay and futuristic sounds. Its so definitely a keeper in my collection.

One of the great early 80's bally games. I really like the widebody. there is so much to shoot for. great looking playfield. hard game to find.

Probably my favorite Bally widebody game. I love the sci-fi art package all around. Even the stencils on the cabinet are cool. Game layout is very unique with lots to shoot for. I also feel like this is probably the only widebody game of its era to properly deal with the added space at the bottom of the game near the flippers. Most widebodies are just kinda floaty down there and the flippers are usually farther apart creating awkward shot geometry. But Embryon nails it. Only downside is that it might be a tad easy. Love this game.
7.249/10
4 years ago
GTP

absolutely appropriate theme for a game.

Wow, look at all the STUFF to shoot at on this game! Tons of captive balls, weird pop bumpers, a spinner, drop targets everywhere, that upper right saucer! On the other hand, how much of this do I want to shoot at? I feel like I'm largely trying to stay in the upper right area which is undoubtedly the safest area to rack of some points (intentionally anyway). It's definitely one of those games with a lot of unintentional scoring going on as the ball bounces around the wiiiide playfield, but that's still fun to me. Sweet theme and art, fun to play, and comes from the middle of Bally's best era.

Definitely one of those pointless multiball games. What a pain to achieve and no real benefit to it.
9.574/10
4 years ago
XQZ

I love wide body machines and this may be my favorite. Love the artwork. Back glass has that last 70's Logan's Run / early art of Atari feel to it. Playfield is loaded with sexy girls engaging in some sort of water based behavior? Lot of great shots, perfect for practice on other games. Just genuinely love this game.

I like this wide body more each time I play it. It's not a snore fest if it is set up properly, and there is always something to shoot at. I don't see this one leaving anytime soon.

What a weird and wacky game.
Fun to play, lots to shoot at.
The diamond configuration in the middle took some getting used to but not in a bad way.
Playfield and backglass artwork has a great, straight outta Omni magazine feel to it.
Just a touch slower paced than I'm used to. Could have been the machine I played.
Not sure if I'd want to own it but will definitely play it a bunch if I see it out somewhere.
7.869/10
5 years ago
SDC

A cool wide body from Bally which has a lot going for it, probably not one I would look at owning but a popular game.
7.682/10
5 years ago
JCH

A glorious widebody with gimmicks and art that makes you appreciate a non-licensed game. As opposed to a theme from a movie you're able to write your own script and taking in the back glass and playfield

embryonjohn has this game on the wishlist.

An OK game. Many toys and stuff to shot at, interesting outlanes and a somewhat poorly placed "center piece" that blocks shots to the upper play field. The game flow is so-so at best. The artwork is remarkable, nut not necessarily in a good way.
It's worth a game or two but certainly nothing I would put in my permanent collection.
7.516/10
5 years ago
GIL

I'm not much on the games prior to 1985, but this one was more fun that I expected.

Really great layout and ruleset. Odd theme but the playfield has so much going on that you don't notice.

Classic wide body
Next12
There are 48 ratings (that include a comment) on this game. Currently showing results page 1 of 2.