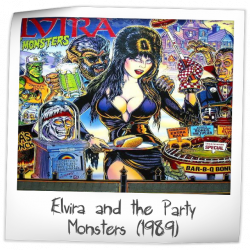 There are 150 ratings (that include a comment) on this game.
Currently showing results page 5 of 6.

Played this machine a lot when it first came out in the local arcades but then never seen it again!
6.433/10
8 years ago
TSM

This pin is perfectly acceptable but is no Scared Stiff. It's more limited given its earlier release. Still like the theme and the ramps. Not a fan of the sounds, especially on the pop bumpers. All in all, a good but not great game.
8.576/10
8 years ago
MLV

Fun game. Like the theme and artwork. Not awesome, but definitely a thumbs-up for this late 80's pinball machine. Pop bumpers moving up & down are cool.
8.248/10
8 years ago
???

A fun and easy game with lots of things to shoot for. Awesome artwork and music! It's pretty easy to get jackpot and even completing Elvira for 3 million shot. However, the game's quirky style with horror comedy theme works well for me. Fun fun fun... & boobies!

Miketsu edited previous rating on April 20, 2018.
Miketsu has owned this game in the past.

I think I enjoy this over Scared Stiff! Fun shots, great music, theme, personality, art and just about everything else.

I love this game. I did not want to sell it, but I wanted a new game more then I wanted to keep it. Sometimes letting go of games for new ones keeps the hobby fresh, and thats more important then any awesome theme. What I miss most about this game is the art.

PEN edited previous rating on May 11, 2014.
PEN has owned this game in the past.

Kneissl edited previous rating on May 09, 2017.
Kneissl has owned this game in the past.

Elvira and the Party Monsters was one of those games in college that I could not stop playing. Just hanging out and hearing "Thank you boys..." made me smile if not laugh out loud every time I heard it.

The Pros:
This is a stunning example of the perfect execution of a theme. Now, Elvira is not a huge movie star, she's the host of a late night B-rated horror film show. Puns and innuendo are everywhere and the hostess seems to be having as much fun speaking the audio quotes as the player is playing the game (this is a very good thing). Shots and targets are very nicely laid out with shots being short and long on this deck. Starting multiball had a great audio/light show that in my opinion, rivals The Addams Family. Greg Freres knocked it out of the park on this art package. It was so good, he had to add a "Modesty Patch" to it.

The Cons:
The ELVIRA and multiball JP awards can be unbalancing to everything else in the game's rules. The outer lanes hit the top of the slings, sending your balls into the outlanes across the PF. I guess I have to get better at my nudging skills on this table. Left ramp all day long...

The Takeaway:
A tongue in cheek personality realized beautifully through a pinball game. The table plays well, but scoring is unbalanced. Fortunately Dennis Nordman and team refined this PF and added better rules to it in the Indianapolis 500 pinball game.

Update V1:
Left ramp all day. But in multiplayer games, you can steal balls from your opponents. So, play better! A great design that could use an update on the rules, but even then... what's wrong with playing pinball games for fun?!? I like it better than Whoa Nellie!

i must have a lemon grrrrr

The first pinball table I fell in love with. I would play this every day at the old Franks-A-Lot hot dog joint in Wheeling, IL. I played it again years later and found it was still a great machine, not just a fondly remembered artifact of my childhood. I particularly like the music and sound effects on this machine ... it's quotability is perhaps only exceeded by "The Addams Family."
8.842/10
9 years ago
JLM

I love Elvira - no surprise I love this pin. I actually prefer it over Scared stiff. Great game with humourous quotes. The boogiemen are just great. The "don't touch me there" if you try to start a new game with no credit left is a nice final touch!

Awesome machine for this years. I had fun playing with this Pin and i'm very impressed for all aspects of this game.
7.020/10
9 years ago
BDS

The best thing about EATPM is the artwork. Hands down, it kicks major ass over pretty much every other pin of this era. The backglass featuring the busty mistress & monsters is extremely detailed & well done. Elvira looks sexy as hell laying out along the sides of the cabinet too, demanding that you stick this machine on the end of a lineup. Just an amazing overall art package. The shot layout is fairly easy with the "Monster Slide" left ramp being the most fun to shoot ("OH YEAH!"). Elvira has a handful of playful, funny quotes, and the rest of the sound package doesn't disappoint. The rules are decent, but "Extra Ball" can seem a bit too obtainable.

Its one of my favourite sys 11 Machines
I love the jokes on Backlass and Playfield, and the Background History of this Game.
THX Steve Richie for Voices and "Broken Bones"...

Not too easy to Play, but always Fun.

flipperdoktor has owned this game in the past.

What can you say, it's Elvira in all her campy glory!! This was THE game when I got into pinball, so fun to play and great to look at!! I think this is Greg Fereres backglass masterpiece and that's really saying something when you consider his other work!! Then we have the custom speech by Elvira herself, was the standard for humorous pinball voice until she outdid herself on Scared Stiff.

Love it better than scared stiff!

PINBELL has owned this game in the past.

Pretty fun game but gets a little monotonous over time. A great game for a large cllection, and a great thems.

stevebighead has owned this game in the past.

this would be a good if not for elvira

trimoto has owned this game in the past.

I JUST LOVE THIS GAME. And scared stiff both awesome.

Mary has this game on the wishlist.


Cons:
Multiball jackpots are essentially the only way to score and can get old
There are other ways to score but it comes down to shooting the ramps repeatedly(still fun)

PreviousNext123456
There are 150 ratings (that include a comment) on this game. Currently showing results page 5 of 6.