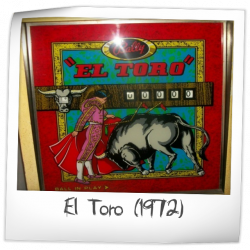 Possibly the worst pinball machine ever made in quantity. The game play is basically pachinko, except you hit it back up top on the left orbit side only all day. It's possible there's more skill involved in pachinko. The artwork looks like it was cut and pasted from stock art; the backglass proclaiming "El Toro" in quotation marks makes me think I should put quotes around the words "pinball" "machine". I actually had to play this in competition once and I was tempted to walk away from my game, it was so boring.

This is an example of one of the few machines I would not take if it were given to me. It's not even useful for a reskin.
2.629/10
5 years ago
RHO

The game has been dubbed one of the worst EMs ever made. With good reason. Gameplay is a drag, with little more than the top rollovers to shoot for. You can almost see the tumbleweeds blow across the barren playfield. The art is poor, with the plastics bearing some of the worst art ever on pinball plastics. Backglass doesn't make good use of the space it has. Avoid at all costs.
1.317/10
6 years ago
DEF

I played El Toro at the Roanoke Pinball Museum because someone suggested it was the worst game ever made. This game absolutely delivers on that promise. There is almost nothing to do or shoot for. The double rollover lanes are A TERRIBLE IDEA. The right lane is wildly uninteresting, maybe they forgot that the whole reason similar shots on C37, 300, and Atlantis are exciting are because they had TWO LANES! The only thing to do in this game is ram it up to the top and spell EL TORO or get 1000s via luck and some nudging. The art is next level awful. It's amazing this machine made it into production. Boring, boring, boring, awful looking. I would not spend $100 on a collectors quality example.
1.692/10
8 years ago
DAN

The cabinet artwork is pretty good for the era...the rest in two words is "pretty bad". Oddest layout on a pin...all you do is nudge...flipping is almost optional. top part of the playfield is laughable. When set to tilt ends game and the tilt is tight it is unplayable.
1.880/10
9 years ago
ZUL

El Toro is by far Jim Patla's worst design. It pains me to say it... but it's the truth!

The Pros:
Lots of nudging to spell El Toro. The left orbit is a (wide-open) satisfying shot to the top

The Cons:
An utterly far too simple and downright boring game. There really is only one shot, to the top lanes. The art package is amazingly bad. I mean... horrendous. The best looking part of this game is the cabinet. Play it a few times to say that you've played it... and move on.

The Takeaway:
Realize that there are other things to do with your life other than play El Toro. Best described by the incomparably succinct (and owner of the most righteous mane of hair) Dave Hegge: "El Toro? More like El Bore-o."

Update v.1: This game lives up to it's nickname. Keep walking if you respect your pin-self!