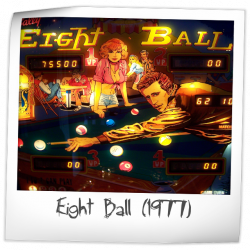 There are 36 ratings (that include a comment) on this game.
Currently showing results page 1 of 2.

The playfield layout is open, clean, easy to understand.

Not much in the way of toys or gimmicks, but really nothing in 1977 did.

Where this game shines in my mind is the ease of play - just about anyone knows how to play a game of pool, and it's not tough to pick up.

This is a very basic game without much to do. Save your money for eight ball deluxe instead.

My favorite early SS since the first time I ever played it at age 14 in 1978. Light the 1000 for the best spinner shot in pinball. Light all the balls and get the 5x bonus from the right bank shot lane. Can be brutal but super fun to play.

I love the classic Bally early SS pins, and this pin is second only to the much later 1992 Addams Family in total production. The 20,230 of these produced means you can find one pretty reasonably. Put the CPR mirrored back glass on it and this is a great looking classic Bally SS pin that looks great! How does it play? It is a fun multi player game with a simple objective shooting the classic solids or stripes pool game. Spinner is awesome, and so is the horseshoe, but completing all the target shots includes some risky ones on the lower playing field.
This pin is fully theme integrated from BG to cabinet to play field. It is a simple, quick game and a lot of fun.
6.734/10
11 months ago
MRC

A goof looking pin that is disappointing to play. Make sure you get the ball all the way to the top when going up the left orbit,or it is a sure drain. IMO, eight champ is more fun than than eight ball.

I keep the game around only because of the Theme. The Happy Days and The Fonz. Great nostalgic backglass and it's risque nature for the time period. The gameplay can be a challenge but i only played it to hear the chimes. Good if its in a small collection.

This is the game I played the most growing up, they were everywhere and I worked at a carnival arcade that had it as well. For its time this game was really great. I always thought it had the Fonz in the artwork.
8.000/10
1 year ago
WRA

Happy Days! Simple but addictive game, like a lot of solid state games. This is the first machine that I restored.
Spinner, left hand kick out save. On 3 balls play, this is a tough game to clear 7 balls and get the 8. The loop behind the 8 is satisfying to get the extra ball. Again, not easy to do as rest for each ball.

Skippy2904 has owned this game in the past.

Eight Ball is always challenging and one of the most satisfying spinner shots out there!

Pingball has this game on the wishlist.

To me one of the most recognizable back glasses of all time... bad thing is probably the fastest drains of all times... I love the pool theme play field and this machine is probably a better conversational piece than a player... I grew up with the fonz making this game a must have for me......

lostballchamp has owned this game in the past.

I liked this game but I had a hard time keeping it working !

wardad has owned this game in the past.

If set up correctly, this can be a punishing and brutal game. Playing the game reminds you that ball control can sometimes be taken for granted. Not really a fan of the Fonz backglass artwork or the ho-hum playfield art, but it all works to tie the theme together. The cabinet art is some of the best on any Bally game from the era. Like many other sister games, the key is lighting the spinner and making it sing. Chimes, instead of electronic sounds, are quaint. I still prefer Eight Ball Deluxe to this game, though.
6.903/10
3 years ago
GPS

Simple game but surprisingly fun. Not sure about the lastability, would need to play it more.

onetaste has this game on the wishlist.

Good SS pin that sound and acts like a EM game. Cool pool layout with nice shots to collect the 8 ball. This pin demads respect. Out lanes can be bruttle but with a little nudging can be worked in your favor. I really like this game. I wanted a EM pin but I didn't want the hassle of a EM. this is the best of the old and the new.

codered9394 has owned this game in the past.

Another great pool one ball game that plays phenomenally with a TZ Powerball™.
Paul Faris / Margaret Hudson Artwork and "crackshot" Christian layout make it the classic that is in pinball history. You really have a hard time beating the combination in this case.

The game looks like an early SS, but sounds and plays iike an EM with a bit more flipper "umph".
Classified by new collectors as "boring" (although they have never even played the game), yet was the second highest produced game in the history of pinball by over 20+K units made for specific reasons.

The target memory feature was one of the few "gimmicks" the game had overall, which is taken for granted today.

Requires patience and practice to achieve high scores.
"Ball flailing" = "Failure".
Practice this game, a lot.
Know the targets, and call the shots.

A great choice game for Xpin 7Volution display sets.
This game needs to be revamped for new EPROM sound and music calls someday.
Future Pinball creators Popette and SLAMT1LT did a phenomenal take on this game using modern sounds and music with their Eight Ball ULTRA 1.04, just to give a testament to what could be done with a little creativity.

Somebody would have to make a new MPU board similar to Pascal, however.

The game that got me hooked. I played it constantly between studies at college. Will always hold a place in my heart.

BirdmanCrowe has this game on the wishlist.

this was game was pretty much in every pool hall,bar and bowling alley i played it alot,prefered e.k but liked the look of this title more, the fonz and pinky on the back glass and playfield..classic 70s...the game play is alot slower and boreing these days....i have looked for one foe my collection passed on two cause i just couldnt justify useing the limited space i have for it wen it didnt play as fun..still i think a great balley classic, great art ,nice to look at, jus not a keeper for me, great times in the 70s
6.763/10
5 years ago
DOO

This is a pinball machine that leaves a "love it" or "hate it" taste in your mouth after every game. The black hole of an out lane on the left takes the fun out of it for most, but when you learn to control the ball, it doesn't factor into play as much. I enjoy turning it on from time to time, but it is not my favorite table in my collection.

Eight Ball is a classic. Really, I'm not sure what else I could say.

In all seriousness though, it's a very, very early solid state, and as such it shows. There's not a ton going on here, but Eight Ball has a few absolutely great shots in the game and a solid ruleset that offers multiple ways to score big, something that is very important to me.

The kickback feature is great for a game of this time period and it really sets this title apart from others. Lighting the spinner is easy and is always satisfying to hit. The right "Bank Shot" loop never gets old, whether you shoot a ball up and around it, or whether a pop bumper flings the ball back down it in the opposite direction. The payoff for racking up pool balls and getting their bonus value maxed out at 5X always feels great.

The left spinner can be hit from either flipper, giving the game some nice flexibility. The right loop can be hit with the right flipper with a nice pop back if the ball rolls up far enough and stops. Both shots are extremely satisfying to pull off. These likely unintentional "trick shots" really fits the pool/billiards theme well.

The only negative thing about Eight Ball is that it can be brutal. Even with skilled play you can find yourself getting house ball after house ball with little you can do. When you really get a game going though, you REALLY get a game going and it feels great.

The chimes fit the game perfectly, the backglass is classy, and the green tint all over the playfield is nice. The cabinet itself isn't anything special, but few were from this time period.

Throw a "power ball" in this to act like a real cue ball for an even faster game! Just a simple way to really mix things up.

akm has owned this game in the past.

Had this game a couple years, and it does not get old. It has no specific toys/gimmicks, but its fast speed and challenge, combined with the charm of a chime unit, makes it perpetually great. Getting the spinner lit for 1000 points, and then hitting it full force to blast out 20+ hits, all ringing out with chimes, is great.

Also a beautiful art package of that era, and has striking cabinet artwork when seen from a distance.

I'm a fan of billiards themes and love the backglass on this pin. Its a tough pin when playing fast and strong. Lighting the kickback is the priority then multipliers. Not the best from the era but fun...if you like punishment.

Decent game...the fonz rules.
Next12
There are 36 ratings (that include a comment) on this game. Currently showing results page 1 of 2.