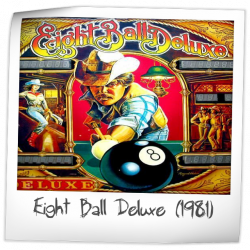 This game ranks 1st in the game group "Eight Ball Deluxe". The group itself ranks #83 in the Pinside Pinball Top 100.

There are 106 ratings (that include a comment) on this game.
Currently showing results page 1 of 5.

Love drop targets great game. Wish I never sold mine. Find one that the owner is not out of their mine on price buy it.
Fun there is a reason everyone one wants this game.
10.000/10
87 days ago
RSG

This machine is a drain monster but i do love to play this one. I enjoy machines with drop targets, and of course this one has a large bank of 7 drop targets, a saucer whole for bonus, 4 drop targets for the multipliers and a left shot for the extra ball.

I prefer the Original 1981 version compared to the other 2. I will NOT play the LE version!

mburec has this game on the wishlist.

A great game from Bally's class of 1981. Still looking for one for my collection.

tomdrum has this game on the wishlist.

I’ve played this game time and time again. It never gets old. Great shot making game. For early 80’s pinball it’s tough to beat this one.
7.961/10
1 year ago
RAT

A true classic that is IMO one of the best of its era, and a standard by which other pins are judged against. This is one of a couple pins I can't see letting out of my collection anytime soon.
8.038/10
1 year ago
MSL

I really like 8 ball deluxe. As I have gotten deeper and deeper into the hobby I am going further back in the past and am now into games older than me, and this early solid state is really advanced for its time. The art is nothing crazy, but the layout and rules on this are excellent. I always spend a few quarters in this when I pass it. My local example at Crabtown USA is pretty cruddy, but this is still fun to play.

As far as the game itself, shooting for the individual ball targets is fun. I believe the scoring logic and layout on this game is excellent. I feel like the shot past the left flipper is a bit easy, and rewards with an extra ball a bit too easy. I love all the drop targets (13?) and when the tilt is set tight this game is punishing. I especially like the "Shoot for Deluxe" after sinking all the balls.

All in all this is a really fun game that I hope to rotate through my basement someday.
9.590/10
1 year ago
WRB

What hasn’t been said about EBD already? It’s just an all around fantastic pin!

Another machine that satisfies my love of drop targets, and straight-forward rules. Great artwork and theme, with game play that's simple in concept, but difficult to execute (at least for me). Found it difficult to utilize the third flipper, but I assume that might be easier with additional chances to play. Very enjoyable.

Used to spend hours playing this game and it was time then well spent. While it certainly is not a complicated game and ruleset, it does have a better-than-average fun factor when compared to most other games of its era. By today's standards, it's still a game I would play occasionally - but not more than a few times before moving on. I enjoy most of the other modern pool (and other) themed machines much more. Aside from nostalgic purposes, I would rather own and play something from the 90's and beyond. And to be fair, I would rather play and own Eight Ball Deluxe than machines from the 60s and 70s.
9.520/10
1 year ago
HG

Classic game.
Give it a chance and it will grow on you.My favourite pin all times because it is pretty simply but really satisfying shots and balanced scores.Short games were always my favourite, when will you ever reach the end of a game again when it lasts at least one hour.
Just compare it to a good movie a song.A blast for a certain time is the best IMO.

Once you learn how to control the linear flippers it feels like taming a horse!

The game itself is okay, with the rules straight forward. The speech for its day I'm sure was groundbreaking, but hearing "quit talking and start chalking" over and over gets annoying. The other sounds effects are pretty poor. A slow game that requires planning shots, which I think is the big appeal of the game. If knocking down drop targets and making a couple other shots here and there is what you're looking for, this is a good pinball. I keep playing it because it's ranked relatively high, but, at least for me, I never have that much fun when I play it.
4.367/10
2 years ago
RAP

I've had a chance to play this game on a few occasions and it's not really for me. I believe it is ugly and the game play is just okay.

Classic. One of the best pins of its' era. Great detailed artwork. Beautiful backglass. Tons of drops. It simply has that "one more game" feel.

One of the better early bally games. Great theme and shots that keep you coming back for more.

The best single ball game of all time. Definitely has that "one more game" aspect. Rules are straightforward and simple but just because you know exactly what you need to do does not mean you can actually pull it off. The difficult shots (8 ball and bank shot) pay off handsomely but hitting them reliably without draining takes a lot of practice and even then.... Sound was great for it's day. Art is excellent.

Great game to play with friends. Deep enough rules for an early solid state that advanced players can enjoy it, yet the rules are easy enough for beginners to get a grasp on the idea that there is more than just keeping the ball alive. Completing deluxe is a fun goal to go for when playing alone. Chalk up!

This is a decent game for the era. You'll spend most of your time shooting drop targets. The drop targets are memorized, so that the remaining targets will pop back up when you play your next ball. This is one of the neatest features about the game.

This machine has a third flipper, but it doesn't make great use of it. No shot directly feeds to the flipper and the flipper has no shots that are easier made with the upper flipper. It can be used to get control of the ball, but overall it is pretty useless.

The western theme doesn't do anything for me. The artwork is not bad, it's just not my taste.

The game logic seems faulty to me. The amount of balls you've knocked down is memorized and given as a bonus when the ball drains or special is hit. Being as these bonuses are the main way to get points. It makes the earlier balls in play much more valuable then the later ones. As knocking a ball down on ball 1 guarantees 5 ball bonuses, verses knocking a ball down on ball 5, which only gives one. I personally think if you're going to have logic the favors a ball, the later balls should have more value instead of how this game is setup.

Overall, it's a good game for the era. Though I feel it is overrated. Some people see something in it that I don't.
9.411/10
2 years ago
RMF

Classic pin with a simple ruleset yet very tough and is super addictive. I I love how you get bonus multipliers by hitting drop targets.

This game is very repetitive. The middle of the play field is just plain empty. The drop targets and theme are cool but the game loses that loving feeling quickly. Speaking of quickly, your game will after be over quickly. I like to rate drain in terms of how much draining has to do with the players abilities alongside how apt the ball is to draining. 8 ball drains often and has little to do with your skill level. If you try to shoot at...anything really, you will lose your ball quickly. This gets annoying as you want to get into shooting the ball around to get a game of “pool” going, but you rarely have enough play time to get into the zone. Love the theme and lighting. This is a cool game concept that just misses the mark due to lack of variety and a bad drain rate.
8.974/10
2 years ago
RVJ

They made it three different times for a reason!

Pingball has owned this game in the past.

This game got me through my upperclassmen men years at college! This is one of the best classic pinball games of the early 80's and is considered one of my top three machines that I must have! Admittedly, I am biased as, not only am I nostalgic about this game, but I prefer classic pinball to the more modern ones.
Next12345
There are 106 ratings (that include a comment) on this game. Currently showing results page 1 of 5.