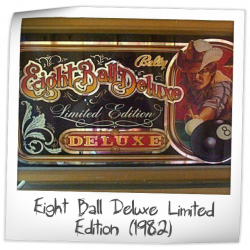 This game ranks 1st in the game group "Eight Ball Deluxe". The group itself ranks #80 in the Pinside Pinball Top 100.

Bally had three production runs of this classic for good reasons and I'm sure a fourth would be well received (are you listening over at Chicago Gaming???)

From a player's perspective, EBD in any cabinet is EBD. 39 years after the initial release it remains a great game for two reasons: 1) absolute "just one more game" factor 2) each time you play the results are different--3 or 5 bail matters not!

From a collector's standpoint: the LE cabinet has its own unique personality--especially among other machines.

From a service tech standpoint: never had problems servicing an LE, Mr. & Ms Pac-Man, or Centaur II in the leftover Rapid Fire cabinets. Certain things are actually easier to service in the LE cabinet.

BTW: I actually uncrated the early production EBD's that shipped with *white* pop bumper caps and had the lower guides on the outlanes and flippers (similar to Flash Gordon).

I love this game. Great artwork, lots of drops, fun callouts (one of my favorites in ALL of pinball), and that one more game feel.
The LE is actually far cheaper than the original, and I like it even better because of the quirky design.

What a classic! I love the call outs and it is still a challenge to really beat this machine. The limited edition has it’s own appeal and it has really grown on me.
Pros: almost every one that comes over gravitates to this machine. The eight ball shot and the bank shot (at least 4 and 5x shots) are pretty challenging and far from automatic. Great speech for its day.
Overall a nice open shooter with nice play field art.
Cons: Limited edition backglass too small. Fluorescent light behind backglass is a bit lame but I understand an LED rope light can dress it up some. Sometimes the drop targets won’t drop when hit hard (perhaps weak springs on mine). Limited edition a bit harder to work on.

Everyone knows Eight Ball Deluxe is an awesome game, but I love the Limited Edition Cabinet even more. A little more unique in the lineup than just a bunch of cookie cutter cabs. The head design also reduces playfield glare considerably.

I really love playing this game, and never get tired of it. Lots of challenging shots, and it's not easy to set yourself up for a high score. I like the backglass on the original EBD, but for some reason, I like this Limited Edition better. I just think it looks cool. Maybe because it's so different from most other machines.

I had this in my collection 25 years ago and sold it because I was young and moving a lot. Have been keeping my eyes open for another one, and when I find a good one, it will be back in my collection permanently.

Dooskie has this game on the wishlist.

Not really a theme that tugs at the heartstrings but this is a classic Bally, 'Shoot the Eight Ball!' the electronic voice tells you. One of those games everyone seems to want to own and I can see why.
8.411/10
5 years ago
ERW

All time classic. I have had this game for over a year and I don't see it going anywhere anytime soon. Drops everywhere, and a tough eightball shot. Just one more game feel, and a great game to learn shooting skills on as you can utilize all the tricks to gain an advantage in this game.

chuckwurt has owned this game in the past.

Awesome game play. The non-standard cabinet and smaller backglass are not quite as aesthetically pleasing to most, but the game play is identical, which is what really matters. A true classic!

One of the greatest games ever made as far as the actual game play is concerned. The game is fast, very fast, fun and trains your reflexes. The rules are simple but the shots are challenging. The annoying voice tells you what to go after. This is helpful if you don't know the rules but gets old very quickly after you figured it out. On the down side, the machine is not much to look at. The cabinet and artwork are goofy. What were they thinking? That's a real shame, such a great game deserved better artwork and cabinet. The regular edition was way better in terms of looks.
The play field offsets nicely against the fast moving ball, flippers are strong, the 3 bumpers work well together in the confined space up top. The side targets are relatively easy, the 8 ball and bonus multipliers are a bit more difficult.
After you take the side targets down you're left with stand up targets which is cool. There is really not that much "stuff" on the playfield but it all works together well for a coherent whole. A game for the advanced skill level that never gets old.

Yoski has owned this game in the past.

The Cons:
How can those pop bumpers shoot the ball back between the flippers so fast from a direct shot? That's 2/3rd's up the playfield and back and it still beats me to the punch! Must work on reflexive twitching skills! A 2 ball multiball with a lock from the saucer is the only thing that I can think of to make this game better. 2x PF scores would be way schweet! I prefer the art pax on the original head. This game looks good in the smaller size, but it is more of a business card (to me) than a BG.

The Takeaway:
If some people think this game is too easy... there are a number of software options to adjust the gameplay with. Steepen it up, wax the PF and put on a new set of rubbers to make this game as fast as you can and see how long your 3 ball games last. A true player that has everything in it that a classic Bally has. Great play, great art and the feeling that you always want to go for another game. There seems to be a number of "haters" on this game for various reasons. "This game is a drainer... it was made for for the operators (duh)... it hurts my mangina..." in relation to how this game plays. Well, me belief is that this game is (Warning, Warning... incoming rant... Warning, Warning) ETERNALLY CHALLENGING!!! THIS IS WHAT A MASTERFUL GAME DESIGN DOES... IT GIVES YOU ENOUGH TO KEEP YOU COMING BACK FOR MORE EVEN WHEN IT MAKES YOU LOOK SILLY! SO GET OVER IT AND PLAY LIKE YOU SHOULD! IF YOU PLAY AS YOU SHOULD AND PLAY CONSISTENTLY ON A CHALLENGING TABLE, YOU WILL BE A BETTER PINBALL PLAYER. PINBALL IS A GAME OF LUCK, BUT THE BEST PLAYERS MINIMIZE THIS BY PLAYING WITH SKILL!!!

With this I will leave with the immortal words of Norm from "This Old Pinball" on T.O.P. #4 - "Pinball Ain't Dead, It Just Smells Funny": "SO PLAY BETTAHH!!!!! (Monkey screeches follow...)"


Update:
This game rocks. I can see why it was one of the best, most popular and highly produced of it's era. It is a great game from a theme, players and operator's perspective. This game is so good, that I don't even mind the wacky cabinet. The single flourescent bulb behind the bg is a sign of things to come... Before The Addams Family, there was Eight Ball Deluxe!

Such a great pinball, I don't care what cabinet it's in, but I will say this: There's something funky about this LE cabinet that I like! and I do like the small backglass in this pin.

Pros: This IS classic pinball. Takes great skill (or learn on this pin) to put the ball when and where you want or need it. One of the most recognized pins of all time, if not a little anachronistic compared to todays pins. Great music and sounds, a blast to play and one of the best multiplayer pins. You either play really good when you try hard or you play very poorly. it rotates quickly in multiplayer

Cons: Not much other than bullet proofing or improving the old wiring/boards. Then you should be good for a long time. It's also slightly too bad the 555 bulb sockets....pita.

Bottom line: Classic play= classic pinball and vice versa. Not to be missed or passed over, especially if you're a fan of the old ballys. I really like pool themed pins and this has to be the greatest of them all. Really has that old bar room feeling like some shady movie from the 1980's.

One of the best rulesets ever for a classic Bally, speech and inline drops make this a classic of pinball history, these go for more than the typical Bally of the era because its a player's machine.

CrazyFliprFingrs has owned this game in the past.

I used to work on this machine a lot back in the day. I had plenty of opportunity to play it also. I never cared much for the LE cabinets that this machine and Centaur II and MR/MRS Pac used. They were a pain in the butt to get to the electronics.

Overall, this game has a decent theme and game strategy, but it doesn't really seem to grab my attention very much. I thought they could have done a better job with the artwork also.
7.294/10
11 years ago
???

A good "limited edition" of a classic.

Fredaboy1 has this game on the wishlist.