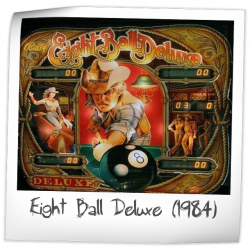 This game has received 19 approved Pinsider ratings. 6 more approved ratings are needed to get a rating and for it to be eligible for the Pinside Pinball Top 100 ranking.

There is a reason this game still demands good money in all condition of wear - it is just, hands down - GREAT PINBALL. its easy and engaging and just a blast to play. I remember this game from my childhood and love it - will add one to my collection one day when the opportunity presents itself.
8.740/10
76 days ago
KEV

Probably the most iconic billiards themed pinball. So much so that it was brought back a Third Time!

The cabinet is the obvious difference between this and its predecessors, I don't mind the new look and color but I am partial to the original. I also prefer paint over decals.

Definitely a winner in the addictive/one more game category. A game with simple, intuitive goals; easy in the beginning but gets more challenging the longer you play. I always find myself needing just one or two more targets to achieve a fantastic score. . .

Solid State 80s sounds/voices are not for everyone but I like them in this sort of game, period correct if you will.

A fun and enduring game that tests your shot-making capabilities and offers multiple options to score points.

I like the fast game play and the playfield layout. The gameplay is simple and fun. The constant sound was annoying at first but a quick setting change and now the sounds are great. Love the callous " quit talking and start chalking". This game is easy to work on and tons of parts are available for fixing. Warning game is very addictive and will keep you coming back for more.
7.451/10
2 years ago
MLP

"Eight Ball Deluxe" is a fairly easy game with a simple ruleset and rewarding shots. It consists of hitting drop targets on the right side of the table, then hitting the 8-ball and the Deluxe shot. There are slightly more things to do but I really liked playing this game. My only gripe is the audio. I know it's basic but I don't need to be told "Go for the [ball you need to hit] ball" each time I miss a target. There's "taunting" and then there's "annoying". This is the latter. Good early Bally table.
7.756/10
2 years ago
ADM

I didn't realize that this game would not have enough ratings for it to be ranked on the Pinside list. I've had the chance to play it (while picking up another machine from a seller with my buddy). This one wasn't for sale, and I can see why. I didn't think a game about billiards would be fun, but this game is pretty fun. I've sadly not seen another to play since that fateful day, but I managed to get a few good games in and look forward to getting another crack at it. Plenty of shots to hit, the machine I played was smooth, and overall it was exactly what I wanted it to be. This game should be a must-play for anyone who enjoys shooting pool.
8.824/10
2 years ago
MDF

Never in all my life have I ever played a pin with so many different ways to win a special, and when you manage to get them all in 5 balls? It is truly a moment to be cherished and remembered. The End. Except the only thing that bugs me is sometimes the shot to the saucer skips over it into the upper rollover area and someday I'll figure out how to annihilate that glitch.
8.339/10
3 years ago
RAY

This game is really fun.

This rating is based off of the original EBD from 1981. The only difference I can see with this deck is the graphic on the sides of the headbox. I like the older stencil spray, so... the cab rating is lower.

Eight Ball Deluxe is a damn fine game to play.

The Cons:
There isn't one in my basement. How can those pop bumpers shoot the ball back between the flippers so fast from a direct shot? That's 2/3rd's up the playfield and back and it still beats me to the punch! Must work on reflexive twitching skills! A 2 ball multiball with a lock from the saucer is the only thing that I can think of to make this game better. 2x PF scores would be way schweet!

The Takeaway:
If some people think this game is too easy... there are a number of software options to adjust the gameplay with. Steepen it up, wax the PF and put on a new set of rubbers to make this game as fast as you can and see how long your 3 ball games last. true player that has everything in it that a classic Bally has. Great play, great art and the feeling that you always want to go for another game. There seems to be a number of "haters" on this game for various reasons. "This game is a drainer... it was made for for the operators (duh)... it hurts my mangina..." in relation to how this game plays. Well, me belief is that this game is (Warning, Warning... incoming rant... Warning, Warning) ETERNALLY CHALLENGING!!! THIS IS WHAT A MASTERFUL GAME DESIGN DOES... IT GIVES YOU ENOUGH TO KEEP YOU COMING BACK FOR MORE EVEN WHEN IT MAKES YOU LOOK SILLY! SO GET OVER IT AND PLAY LIKE YOU SHOULD! IF YOU PLAY AS YOU SHOULD AND PLAY CONSISTENTLY ON A CHALLENGING TABLE, YOU WILL BE A BETTER PINBALL PLAYER. PINBALL IS A GAME OF LUCK, BUT THE BEST PLAYERS MINIMIZE THIS BY PLAYING WITH SKILL!!!

Update:
This game rocks. I can see why it was one of the best, most popular and highly produced of it's era. It is a great game from a theme, players and operator's perspective. Before The Addams Family, there was Eight Ball Deluxe!

Caucasian2Step edited previous rating on May 01, 2017.

Not really a theme that tugs at the heartstrings but this is a classic Bally, 'Shoot the Eight Ball!' the electronic voice tells you. One of those games everyone seems to want to own and I can see why.
8.838/10
5 years ago
TBK

This is an edited UPDATED review of the original 1981 version, aka Eight Ball Deluxe "Classic".

There are no gameplay differences, but there are design differences.
Notably, a decaled plywood/particle board cabinet (which looks better, especially airbrushed), a slightly smaller hinged backbox and backglass, black "Bally Midway" apron, insert light boards, and wiring differences inside the backbox and playfield as they apply to the PCBs. Nearly all of this version were day one mylar coated. Basically, slightly upgraded in terms of technology. Other than that, it is the same game. I had to give it a *slightly* better rating, due to the improved cabinet artwork design.
What people need to realize is all three versions have more than just cosmetic differences.

If you are interested in learning about the list of the other major differences in this particular design go here:
https://pinside.com/pinball/forum/topic/eight-ball-deluxe-differences-and-prices#post-2966222

The LE version in my opinion is the worst due to the mini backglass and displays with leftover Rapid Fire cabinets.
It was just an experiment like Centaur II and a couple of other machines from this era.

To revisit, many EBD "Classic" cabinets are ACTUALLY particleboard not plywood in construction, or a combination of both (which is in my particular case) and something to watch for if you decide to buy one.
This was common because they were produced by Bally-Midway (video game production style cabinets), not Bally.
One drop of water and the cabinet will blow up like a balloon.
My Eight Ball Deluxe "Classic" has some notable differences including a numbered brass plaque (#527), but I actually built this game from the ground up using a proper wired playfield, backbox, backglass, spare parts, harnesses, boards, transformer, assemblies, and cabinet.
My serial numbers do not match.
Production run is estimated at 2658 based on the latest 2016 Mr. Pinball Price Guide, which is a LOT higher than it was originally percepted.
It is more like a "Special Edition" than anything else, which is the other common name it is known by in the pinball world.
A perfect non-faded, solid cabinet, superb+ playfield version of this game will go for easily $4k, but they are RARE.

One of the games that defined the 1980s generation of the Early Bally Solid State Era.

This was one of the "go to" games in the arcades in the day alongside games like Black Knight, Black Hole, and Haunted House, during the 80s revival period.
This is a "one more game" title.

A great game for novices and experts alike.
Straightforward ruleset, nobody gets confused.
Fun horseshoe targets bank to shoot the pool balls, very addictive.
Outstanding artwork by Margaret Hudson, her best work IMHO.
Great competition game as well, or up to four players.
This is a good choice for a collector which can stand well on its own or a collection of 100+ pinball machines.

A lot of people say the game is "not fast enough". (See another example above...)
REALLY?
If you do not feel challenged, put a PowerBall™ into a EBD (hey, a "mini" cue ball, novel idea!), raise the back legs up up as high as possible, and jack the game up on 2X4s.
Players were overjoyed when I did that.
Stop making the game play like a woodrail, the flippers are MORE than strong enough to make all the shots.
The game then REALLY rocks, outlanes and center are deadly, and ball time is less than 15 seconds unless you are EXTREMELY good.
EBD at its finest.
"Long live the artwork of Margaret Hudson."

I have owned FOUR EBD in my lifetime, 2X original, and 1X 1984 version, including building one from scratch from a wired playfield, and the fact I still carry a NOS glasses on my wall. Yes, it is that GOOD.

NOTE: If you do the modification I mentioned above, make sure you ADJUST the tilt bob (or remove it), or the game will be UNPLAYABLE! (The incline angle is well above 10+ degrees)

Old Simple 2005 Review:
Classic, fun for all skill levels, "Suitable for any collector!"