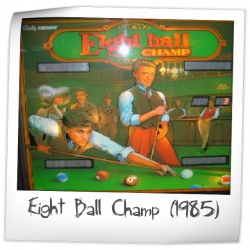 This game deserves a much higher rating.The sots to run the table are difficult and for its time more than enough to keep you engaged.... same voice as eight ball deluxe with basically the same goal.. to me this is a top 125 game... The back glass really killed this games image.... I like the eightball shot, and the play field lay out...all individual drop targets require skill shots to get em all.... isn’t that what it was all about in this games time??

lostballchamp has owned this game in the past.

I prefer this game to EBD for gameplay, but the backglass art is so bad. Actually not the art, but the process - it could have looked much better if it was screen printed. Anyway, with a better backglass it would be a fun one to own for while. Great league and tournament game!
5.734/10
3 years ago
MAH

I owned this game really wanted an Eight Ball Deluxe but was not willing to pay up for a solid state game that really had the fun value from when I was a kid. It is not that it is a bad game - for a big collection it would be OK but I sold it when I was able to pick up more modern DMD games.
I always wished someone would remake Eight Ball Deluxe in a modern DMD version with a great playfield slant for more speed.
Eight Ball Champ still has all the sounds of Eight Ball Deluxe but it is far off from the fun of Eight Ball Deluxe and hte price on the machine reflects it. It was also of he Bally era when they went cheap on cabinets and art. The only good thing Bally did is the hinged backglass / backboard - that is the way easier to service without the backglass issue.

Eight Ball Champ is a sniper's game, but the listing, wandering ball slows down game play too much to make this shooter a fun experience. Not a great game, try Eight Ball Deluxe instead.
7.123/10
3 years ago
JOE

I purchased this because I really enjoyed Eight Ball and Eight Ball Deluxe. Didn't find this game near as fun. It's not a bad game, but I just didn't enjoy it quite as much as the other two. However, if you take the time to learn the rules, there are a lot of shots to hit to set yourself up for some big scores.

Under the right circumstances, I'd probably give this game another chance.

Dooskie has owned this game in the past.

The lackluster sequel to Eight Ball Deluxe and the original Eight Ball.
It tries to be different and emulate more of a "real" pool table shot flow and fails in most levels.
The shots are not poor, it just does not work well in concept overall.
The playfield is just a wide open space with the need to strike a few well aimed shots.
Artwork is quite dark, and the backglass has a lot of "black line".
Sound and gameplay is below average, not to mention recycling ALL voices from EBD squawk and talk, which in my book is a HUGE NO NO as this is being LAZY.
The deeper ruleset does not save this game.

To add to the challenge this is a 6803 Bally, which for a long time was virtually unrepairable due to availability of parts and understanding of the electronic circuit board design.
The knowledge was almost lost, and recently revived.

The one thing that I truly remember about this game was the cabinet and backbox.
Most were made out of particleboard not plywood.
One drop of water, and they swelled up like a balloon.
Protect those cabinets!!!

Stick to the first two titles, either is far superior in gameplay.
In comparison:
Eight Ball Deluxe (any version) you will play until you wear holes through the playfield.
Eight Ball is right behind it, with an excellent spinner shot and addictive bank shot that will make you come back for another game.

FINAL NOTE:
Not all EBC machines were made in the USA (Bally-Midway)
Some were made by Bally-Wulff in Germany.
Nobody really knows what the "production split" was overall.
Production numbers are skewed regarding 1500 units "confirmed".
The reality maybe a few hundred more or less.

Edit: After playing this game for a while now I find myself enjoying it a bit more, it still has poor sound, backglass and cabinet art but I have come to like the playfield layout, game rules and shots more so I have updated my rating to reflect that. Still not my favorite game in the house but I will probably keep it around for a while.

I enjoy playing Champ quite a bit, I don't mind the squawk and talk voices but the background sounds are pretty bad. The shot call outs are good, the table layout is pretty good, I enjoy making the shots. I find the pool theme is fairly well done but it is a pretty easy game to put up good scores on.

Play is fairly slow and you can get good ball times out of it. Not my favorite game in the house but I do enjoy playing it. Build quality isn't the best but Bally in general of this era seem to be cheaply made IMO when compared to Gottliebs of the same era.

I generally like pool themed tables but this is my least favorite, doesnt integrate pool in that much. Odd layout.
6.967/10
7 years ago
ZUL

Eight Ball champ is a game that requires you to make tight shots all around the table.

The Pros:
You have to be on point to get this game to sing. Bonus is king... so making the shots you need to max your bonus is your priority. Collect the upper alley to collect the 8 and you are on your way to a high score in combination with your 5x bonus. The 3 laness at the top of the PF require accuracy. Your aim must be on point or you will suffer quick drains. Drops in front of standups are always a good idea in my book. Gibson girls are cool!

The Cons:
The 3rd flipper, is it really necessary? I don't really think so. The shot is easily made from the lower right flipper. This is a control game, so keep this deck waxed to keep you from getting bored. Is it just me or does this game feel like it's Fathom's idiot brother?

The Takeaway:
Eight Ball Deluxe is the best game George ever designed. This one is alright as well, but considering it came AFTER EBD with no multiball. I can see why at the time it was produced that it never took off. EBC is a good game.... not a great one.

Update:
After spending some time at Flipper McGill's today (WELCOME BACK!) I like this game a little better. Drops with standups are always a good thing in my book (this is especially true when the individual targets alternate between the up and down state as they are shot) and this game requires you to shoot all over this table. The orbit and the spinner to the top 3 lanes are tight and the left orbit to the top saucer is a bit wider, but needs a solid shot to make it all the way to the top of the PF. This wide open PF seems to send the ball toward the most evil outlanes to gobble up your ball with a most common frequency. I like this game more, the more I play it. This is a good sign. Me still no likey the upper fleeper though.

Update V.2:
After spending more time at Flipper McGill''s this weekend I did the un-thinkable. I read the rule sheet on the game's apron... IMAGINE THAT?!? Spell out C-H-A-M-P in the top and inlanes to double all PF scores. Again to triple them. The top half of the deck (which looks an awful lot like Fathom) is now ready to be shot for. The left most lane is a great choice as it will lead to the bonus X saucer AND drop the ball down into the H-A-M lanes. The game will cue (Ha! get it?) you to which drop target needs to be shot. I am partial to lighting the spinner as high as it can go at 3x PF scores and ripping it myself. The lanes fully lit are worth some kitty too, but the spinner at 15k plus a spin... too hard to pass it up!

This game doesn't seem to get a lot of love, but you can never go wrong with a pool theme. The game play follows a game of eight ball (naturally). The art on the backglass and pf is very good - an early 20th century theme and it's very original. It's a smaller sized game but kids love it and people new to pinball like it because it's easy to pick up on the rule set. Makes a great game in a larger collection.
6.523/10
9 years ago
MLV

I like the playfield. Cabinet and backglass art work not impressive. Speech is somewhat annoying to me. After playing this machine, I decided that I would not want to buy one.

Greatly unappreciated when compared to its sister, Eight Ball Deluxe, Champ is a shooters game with fairly deep rules for its era. Majority of the shots are tight and require a good shot to make them. The drops on the sides of the playfield require you to regain control of the ball after an out of control shot which keeps you on your toes despite the slower pace of the game.

ninjadoug has owned this game in the past.

I just finished refurbishing this pinball for a friend and play tested it for a few days. It isn't as good as Eightball Deluxe but the more I play it the more I enjoy this pinball. The squawk and talk however gets annoying and I don't care for the backglass. However the game play is a lot of fun. If you like having to shoot for shots and not just hit the ball ramdomly then this pin is for you.
6.888/10
11 years ago
TWO

Considered but bought older Eight Ball (Fonzie) - glad I did.
1
There are 15 ratings (that include a comment) on this game. Currently showing results page 1 of 1.