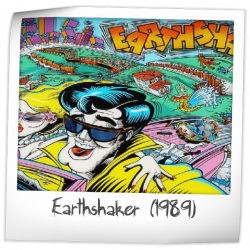 There are 151 ratings (that include a comment) on this game.
Currently showing results page 1 of 7.

Owned this one forever so I'm biased. This game is so well designed--once you figure it out it it's almost like losing your ball is optional. Great table if you just love to play.

I'm a Pat Lawlor fan so I'm obviously biased. I think the theme on ES is terrific, the music is great, and the artwork is very fun. The playfield layout might be a bit clunky when compared to more flowing designs. I think ES is complex enough for serious players, and not too overwhelming for novice players.

I’m sure the positive ratings for this pin are driven by nostalgia (and maybe that it was the first (?) pinball machine to feature a shaker motor) because it is not good.

The artwork is functional, the playfield is poorly visually signposted, and - thus - the rules are incomprehensible upon walk-up to the pin. I played it, didn’t understand it, watched three tutorials on YouTube after returning home… still didn’t understand it. I’m someone who, on the same trip, played TWD, GoT and multiple other modern Sterns.

Then, I read a rules sheet and realised that I simply had to hit the lit shots and then hit the side ramp - and that was it. So, the fact that I didn’t manage to work out what I should be doing while I was on site was a clear demonstration that it’s not well laid out or visually signposted by today’s standards.

Honestly a great system 11. I got to play it at an arcade locally and I have to say it’s pretty fun, the getting the multiball and shooting the jackpot feels great but after you do that there is nothing much more to do beside maybe extra ball Etc. fun game and worth giving it a play.
7.571/10
12 months ago
???

Classic system 11 game. The shaker and fault line are great. I added the sinking institute, which was neat, but does not impact gameplay. I wasn't good enough to consistently exploit the center ramp shot, but if you are really good, that could potentially ruin the fun. At one time I had Earthshaker, Taxi and Whirlwind. Taxi is a very different game, but Whirlwind is pretty similar. As much fun as I had with Earthshaker, Whirlwind was more fun. Since they are similar, Whirlwind stayed and I let Earthshaker go.

RonSwanson has owned this game in the past.

Earthshaker goes hand in hand with Whirlwind, but I think it's the worse of the 2. They are both disaster themed, and have similar goals. Both have a multiball where you collect a jackpot from the upper ramp shot. They both have awards to collect as a second goal as well. I think that the layout of whirlwind is a tad better, but both are fun. The California and Nevada fault line is a fun feature in the back. The art and music are also good too.
9.100/10
1 year ago
???

One that will stay in my collection and it looks great next to whirlwind !~!!!!

If I had the money, my collection would be filled with all the System 11 games I could get my hands on. I love this era - the art, sound, and music are so charming. Earthshaker is no exception, presenting an exaggerated cartoon of 1980s California.

If you're playing for multiball, there's a good variety of shots to aim for, and the game makes it clear where you need to be shooting. One feature I find annoying is that you can shoot the side ramp to spot a different zone, removing the need to make some of the more risky shots like the captive ball to progress toward multiball. This feature makes sense for location play, since if one switch was not working, the player would be unable to get multiball. In the home environment, it makes the game considerably easier because it's pretty simple to stage a ball for the upper left flipper to make the side ramp shot.

Still, it's a fun game to shoot. Not my favorite from Pat Lawlor by any stretch, but it's fun in its own right.

Earthshaker is a fun Pat Lawlor pin, but not as good as some of his later games. I'd strongly recommend a Whirlwind for just a little bit more.

With that said, the main toy in this is the first shaker in a pinball machine. As such, major props for an innovation that is now optional on most machines.

The game itself is a number hunging game. Shoot the lit numbers, lock the balls, go for multiball, and repeat. There is really not that much to do. Additionally, the game has some exploits for good players that makes this poorly suited for experts. If you can nail that center ramp you can hit it over and over and over with little to no risk.

Don't get me wrong, it is a fun game, but not a long term keeper for me.

I personally have mine set up steep with wide open lanes to make it more difficult, but that easy center ramp is a huge turnoff for me.

sataneatscheese has owned this game in the past.

Very fun pin. Love the ramp shot. Love the art work and sounds. Multi ball keeps you on your toes. I do recommend this game.

dabomb1 has owned this game in the past.

My favorite game in college... I used to love hearing the "Earthshaker!!!!!!" call-out, but I could see that getting old in a home setting.

Decent amount of variation for the games of this age, but admittedly, it's a little low on unique gameplay out side of the fault that splits for the ball.
7.806/10
2 years ago
CHS

Super fun game to play, the shaker really enhances the effect. I find it funny though, that you need to seek “shelter” during a quake. Perhaps a whirlwind holdover?
9.184/10
2 years ago
KEY

Earthshaker is a great game. It has some Pat Lawlor signature shots, out lanes, innovative toys/mech.
What I like about it is how much thought went into its design. The mirrored backglass is gorgeous. Shaker motor is great (pretty sure this is the first pin to incorporate a shaker motor)
What I don’t like is... well I honestly can’t think of anything to dislike about it per say. I guess maybe the cabinet art is a bit boring? Hardly a reason to thumbs down a pin though.
Bottom line is, for a system11, this is a great game. Great lastability in any collection.
One downside is that most of these are worn right out but that’s because this game gets played a lot.

Keithisonfire has owned this game in the past.

Probably my favorite System 11 game of all time. Great shots and good rules. It always draws me in for just one more game, and then another and another. That's the sign of a well designed game.
9.646/10
2 years ago
HSH

* I have sinking institute and the ROM for fixing center ramp scoring.
Love this game. What a classic!

I had a really nice copy of this game for awhile & I kind of miss it now , one of the best system 11's "AFTERSHOCK!!!"

TecumsehPlissken has owned this game in the past.

Earthshaker, a Williams disaster pin, is not as good Whirlwind but is still fun to play. Of course, the shaker motor is a prerequisite. The center ramp shot is too easy to rack up the points. Music is better than Whirlwind but not that great.
7.666/10
3 years ago
MWN

This is a fantastic game!

This is a game that seems right on the precipice of greatness. It's an overall pretty damn good game, but something about it doesn't really get the juices flowing. maybe a differing theme or slightly better artwork would have added to it. Extremely playable but not high up there on favorites or wishlist material.
7.376/10
3 years ago
TKM

Fun game for any sized collection. One of the best system 11s.

This is one of my favorite system 11 games. Lots to shoot for here! Great music and sound for the era. Can get a bit too easy if you are Dialed in on your shots but has that “one more game” feeling for me.

Dkjimbo has owned this game in the past.

Along with Whirlwind which I like just as much, this is the best Williams form the late 80's. Funhouse is just as good I guess, but he shaker aspect to this game is what I love. Pretty easy too, so a great game for a beginner pin fan.

Great system 11 with a serious shaker motor. Nice variety of shots. Ca nv lane diverter is cool as well as having a good mix of pops spinners drops etc...

stavio has owned this game in the past.