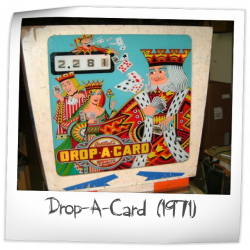 I remember this game being on location at the candy store I played pinball at for the longest period of time out of many pinball machines they had there through the years. Operators and vendors have said to have made the most money ever from a pinball machine on location with this game. The reason being is because it is a very difficult game to beat by score or special and is challenging the player the entire game. It is also deceiving when a player looks at the playfield lay out has seen this game for the first time and might make a player feel like it would be a easy game to beat. A player would think it looks quite simple and easy to knock down the 13 drop targets which lights the two side rollover specials on the top section of the playfield and it's not. The lower side rollover out lanes have this unique unknown reasons of wanting to drain the ball down like no other game i ever played. The ball just seems to get sucked towards and pulled down the side out lanes very easily once it gets close to the side out lane, almost as if there were a magnetic field of some sort causing this to occur and there is not. I like the challenge this game brings to the player and is just a totally different playing wedge head then most wedge head games from that era. This is one of the most fascinating games to play especially when flippers, sling shot side kicks and pop bumpers are totally rebuilt like factory new. I have a very nice original in my collection today and is another favorite game of mine to play.

Full disclosure, this is my first game, rating and first attempt at a restoration.

I chose Drop-A-Card based on many of the reviews from the IPDB, which has many, many more for this game and rates it at an 8/10.

Now I'm a young guy who grew up with video games and flashy awesome technology, so diving into an EM isn't exactly the most amazing, exciting thing out there. However, Drop-A-Card, like many of Gottlieb's famous card-themed wedgeheads, is a wonderfully deceiving game. The point I'm at in the restoration, this game plays very well, but still needs to have the flippers rebuilt and the playfield/table needs to get leveled out properly instead of the jury-rigged stand I have it on.

Even with those faults, this game has draw me into it, bringing me back for many plays! At first it comes off as a simply, easy and almost boring game, just by looking at it! The cab art is the most simplistic design ever conceived. The backglass is just wacky to me and I can't help but stare at it often trying to figure out just what that King is thinking! Playfield art is the nicest piece of the whole art package. I think it's just a very enjoyable looking field.

As for actual gameplay, the main and only object, is to knock down all 13 drop-targets. It sounds simple and looks simple but it's not even close. After a few dozen plays I've gotten pretty good at getting either side banks down and most of the top bank, but the side drains are brutal. They're like magnets, the ball always makes an insane beeline right perfectly down them from the top half of the field.
Those same drains are what make the game fun and exciting, because the drop-targets are easy. Right out in the open, a completely empty playfield except for 2 pops at the top guarding the top bank. The absurdly simplistic layout sucks you in as you quickly lose 2-3 of your balls to those drains with very minimal progress on your 13 target goal!
Speaking of ball count, anyone who sets this machine on 3 ball is insane and clearly doesn't want any enjoyment out of it. 5 ball is an absolute requirement to maintain sanity and get the full enjoyment of the game!

What I enjoy the most about this game is definitely it's simplicity. When games now have scores reaching millions and billions, it's nice to have a very down-to-earth little EM reminding you that breaking 10 thousand is a momentous achievement. That was actually one of my deciding factors for getting this game, as I like having 4 score reels and a max of 9,999. That's a very reasonable scoring amount in my opinion, I think these games with billion point jackpots are just silly. Why have hundreds of millions of points blown through in 10 seconds? Where is the fun? There is hardly anything that doesn't score over 50 thousand! Why all the extra zeros??

THAT is the driving mentality that brings me the enjoyment of Drop-A-Card. No dummy reels or extra nonsense scoring. You work your way up to the specials (replays) and at most you can get 500 points from the outlanes when you've finally sunk all 13 targets. There is nothing else other than you, the pops and your 13 drops; It will go fast and furious and you'll be pained to get past 5,000 even on an amazing game. Rolling it over is only achieved when you've become insanely good at it and learned how to nudge like hell!

Drop-A-Card is definitely a worthy EM and again, as a young guy who's played some of the amazing machines of modern times, THIS little wedgehead has shown me the appeal of EMs and caused me to respect their place in any true collection.

This is my most frustrating game to play, which is exactly what draws me back to it again and again. While not my favorite game, the fact that it is so challenging yet with a simple clean play field makes it like pinball "crack". I walk away having almost won that free game, but not quite. Like just missing the jackpot over and over again so you keep coming back.
6.923/10
9 years ago
RJM

Drop-a-card is a game where, it's gotta be set up right.

The Pros:
Good artwork and a simple layout that add to, but don't distract from the game at hand. Drops from eeeety beeeety fleeeepers require skill, and strong coils. Lighting up the PF when all the targets down is always a challenge. Hitting the upper lanes when all the targets are down for 500 points isn't any easier. A strong and constant challenge with this design. A wide open PF that is deceptively active and requires great nudging/control skills.

The Cons:
The upper bank of targets can be hard to reach to the point of frustration.

The Takeaway:
When this table is leveled and maintined, it's a great classic EM player.
1
There are 5 ratings (that include a comment) on this game. Currently showing results page 1 of 1.