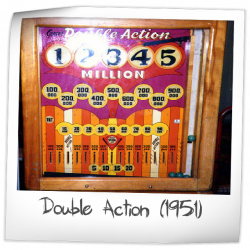 Genco's 1951 Double Action is an electro-mechanical, woodrail, pinball machine which has flippers and an extra flipperless playfield in the backbox with its own set of balls. It has a playfield with 2 flippers, 4 bumpers, 3 kickout holes, and a special vertical playfield (Bagatelle) with pins, lanes, and its own balls behind the back glass. This is a very early flipper pinball game where the flippers are inverted (they are at the lower center of the playfield, have a small gap in between, and pivot outwards. The score is indicated by three rows of lights for each digit in the back glass (top row 1-5 million, 2nd row 100-900 thousand, 3rd row 10-90 thousand). 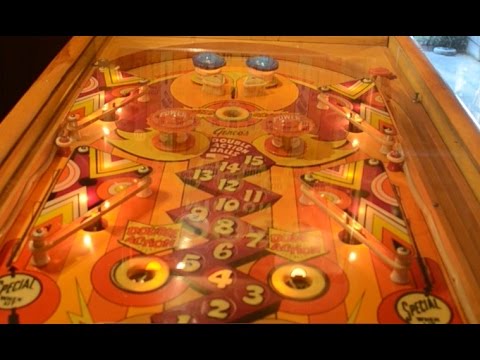