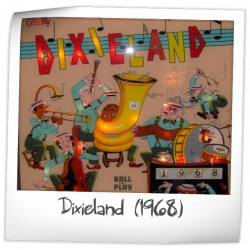 What can I say, I never met a Zale game I didnt like. Love all the zipper games. tons of things to shoot for like adding and collecting Clarinet bonus, Bagatelle, skill shot on serve, and gate buttons. I like gates, this one has 3. The upper right gate can drain it or give it back depending on position of lower gate. Top rebound skill shot (depending on which side is lit) is critical to open left gate. Even with that gate open, the left drain is a killer from slingshots. Artwork is awesome cartoonish and funny, colors are beautiful. this is one of my favorite EMs in my collection.

Dixieland is an interesting game with an interesting rule set. The game rewards you for very deliberate shots and both flippers have access to decent targets depending on your goals. The playfield looks fairly simple but with three gates, ball flowpaths can be altered which are further altered depending if the flippers are open or closed. The action is fairly sedate by my standards so if you are looking for a fast zing-zing-zing game look elsewhere. Dixieland is a snipers game with the shooter in mind. Run up the bonus and collect for 500 points and advance the backglass goal.
8.079/10
4 years ago
TBK

Dixieland is another one of those Ted Zale classics that is not well known, and rarely seen today, mostly out of neglect and age, not quality of gameplay.

It has a combination of many of Ted Zale's earliest innovations that were then ported to later machines such as Four Million BC (Bally, 1971) such as the controlled ball gates in a slightly different manner, and mini playfield (without rollover buttons) that was used in Joust (Bally, 1969) and Op-Pop-Pop (Bally, 1969). The playfield may be asymmetrical, but the shot layout is very balanced based on rewards.

One unique feature is the spelling out of Dixieland via "Clarinet Bonus" lighting on the backglass.
People should recognize this specific feature as it was used in other later titles, most notably games like Eight Ball Deluxe (Bally, 1981). Yes, another example of a feature used decades before supposed "innovations".

Sometimes pinball history and developments are a circle, even if people did not know it happened or why.

This is another game from Bally that had its backglasses made in both 1/4" thick crystal (think expensive glass vases) and plexiglass.

One other notable area is the artwork.
Atypical of the period, it did not use "straight line" jagged artwork but rather cartoonish style that was not particularly common as it was not in fashion.

It is a easily understood, strong playing game that is enhanced with its proper use of "zipper flippers" and very solid shot flow.

I have uploaded high quality photos of my personal game that was non-routed and privately owned between two people for nearly 50 years. Additional photos can be found on the IPDB.

xTheBlackKnightx edited previous rating on May 16, 2018.

A great zipper flipper EM with a nice asymmetric playfield. A good game to do those double tap zipper flipper shots since it has 2 big left and right shots to aim for. I love bagatelle boards on games too, so this one is full of things I like. Art and theme aren't my style but you can't ask for much from the 60s.
1
There are 4 ratings (that include a comment) on this game. Currently showing results page 1 of 1.