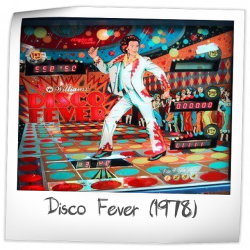 This game has received 14 approved Pinsider ratings. 16 more approved ratings are needed to get a rating and for it to be eligible for the Pinside Pinball Top 100 ranking.

All pinball is fun, it's a question of to what degree. I have a large collection and everyone who sees it is drawn to this game both for the now back in vogue disco theme, and the crazy banana flippers. The game play isn't amazing but it's fast and fun.
6.616/10
2 years ago
SJS

This is one that looked intriguing at first but really just fell short. It plays well and the loop up at the left is a bit different but I quickly figured it out and began losing interest. There really wasn't any "wow" factor.
4.277/10
9 years ago
ZUL

The Pros:
Nanner Fleepers make this game an interesting novelty (for a game or two) and challenge your aim.

The Cons:
Christian Marche is known for the pointy people and his more realistic artwork. This belongs to the second family... but just does not cut it. There is nothing to shoot for on the right side of the PF.

The Takeaway: Tony Kraemer is an interesting person in pinball. Sometimes he designs as himself or on a team of designers (respectively, Pharaoh and Swords of Fury), sometimes he works with mechanics (Taxi), sometimes he does something different (Varkon), sometimes he creates a bad game (Algar). This game was closer to the latter definition. Strangely enough, this game was his best seller after Tri-Zone with 6k sold.
4.325/10
10 years ago
JWM

Bananna flippers make what few shots there are a challenge. Artwork is pretty cheesy.