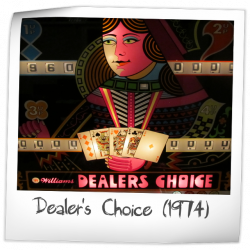 It was in the first Rocky movie. Come on!

Extremely fast with four flippers, wide wide wide open playfield where you're shooting at rollover buttons instead of targets etc. in the center, or you're shooting at the side targets with side flipper. For a multiplayer it's clever how the entire 13 card sequence is worked in and it also advances in steps to special, so it is not difficult to complete it once or twice during a single ball. I sold mine after a few years but actually wouldn't mind having another one.
2.503/10
1 year ago
DAD

I couldnt stand this game, I found it very slow and clunky.

The artwork did not draw me in either. It did not last long at my place.

BrianH has owned this game in the past.

It goes without saying that pinball is highly subjective (like a lot of other hobbies and loves in life :) ).
I played this game as a kid and when I saw it as an adult, after playing a lot of newer machines and my old Transporter:The Rescue, was wondering what was it that had the grab that pulled me in?

It was the simplicity of the game and for me, the sense of nostalgia. It also helps that you love EM games.

The gameplay is "simple". Keep trying to run over the nine buttons that are lit in the center of the playing field to activate a double or triple mode. You try to also keep running over or hitting buttons that advance the bonus by 1000 each. While doing this you try to light up the Ace, King, Queen, Jack and Ten lights to turn on the extra ball light for the right inner lane. The ability to get those lit depends on getting lucky with the upper right hand flipper and some practice with the lower flippers.

It is not a high scoring game - once you get to 99,999 if you are lucky and have played it enough it goes back to zero :). It is a game that requires patience and is addictive and fun. If you like the playing card themes you will like it. If you hate playing card themes - run away, run away.

The strong/weak point is the dual left side flippers that you have to "untrain" your reactions to from previous games because if you have one flipper up the other one goes up and the ball sneaks under it. Letting the ball bounce around on the flippers and then waiting to catch it works on this game.

Major frustrations are when the ball goes down the sides after you have turned on the EXTRA BALL light or have actually gotten all the lights for the 3x bonus except one and you lose the chance to get 3x.

But these are not only first world problems, they are just the thing that calls you back to the game.

Where this game shines is having friends over and playing it in 2, 3 or 4 player mode. Gameplay is relaxed until the ball starts ricocheting within the bumpers on top and then look out - things get wild, then back to "normal".

It's just OK but leaves you looking for more.

My first pin and my first pin sold. I suppose it was good for it's day.

Sergeant has owned this game in the past.

Very fast playing pinball with good shots and a beautiful backglass (if not faded and in one piece). Cool triple bonus award at the end of the game, not much games have this feature. Most games for sale are severely beaten technically and suffer from damages at cab art, playfield and backglass; too bad. This beauty has such a good gameplay it wants to be played again and again and again...

PinFrankie has owned this game in the past.

We recently picked up a Dealer's Choice from a fellow Pinsider and I have to say I am impressed by this mid 70's effort from Williams. The artwork is okay but the game play is wicked fast with the DC pops and the 4 flippers. This one is best played against others like many of this era from Williams.

For the price and fun I highly recommend this as an addition to a collection.

Dealer's Choice is a game that seems to have been made for the operator who never maintains his games in mind.

The Pros:
A layout that has more to shoot for than what one would initially anticipate just by looking at it. Glancing angles for the standups on the upper left require accurate aim.

The Cons:
No spinners and no drops means no fun. Yeah, there's lots to shoot for, but this game is so high on the "meh" factor, you have to ask yourself... why am I playing this deck? I'm usually a HUGE Marche fan, but this game looks like a Baboon's ass. The lower left hand side of this table is death between the flippers and the gaping outlane.

Dealers Choice is the 4-player version of High Ace. A damn fun game with a fine with it or hate it backglass. I know it's just one of those silly queens taken from a deck of cards, but there is something Mona Lisa-esque in her demeanor. Add to that the distinct 70's color palette, graphics and design, and you have a very funky looking game on your hands. But where it shines is the addictive gameplay: basic and yet, very challenging. D's Choice is a good choice for pinheads looking for solid EM gameplay on the cheap.

DEVILinIRON edited previous rating on April 08, 2013.
DEVILinIRON has owned this game in the past.

I love my Dealers Choice. I was surprised at the fast play at first but the wide open play field and 3 flippers really gets the ball moving. I'd say the art work is average, not great not terrible. Love shooting for the suit cards and love the 9 rollover buttons. All in all, a keeper for my collection.

1
There are 12 ratings (that include a comment) on this game. Currently showing results page 1 of 1.