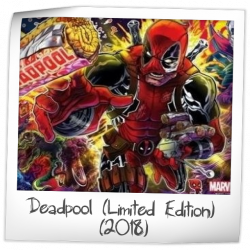 This game ranks 2nd in the game group "Deadpool". The group itself ranks #7 in the Pinside Pinball Top 100.

Note! There are multiple versions of this game!
This is "Deadpool (Limited Edition)".
The other versions are: Deadpool (Pro) (regular version), Deadpool (Premium)

There are 78 ratings (that include a comment) on this game.
Currently showing results page 1 of 4.

Pretty great game. Interesting shots and layout, feels a bit unique in some ways. I think the LE got the worst cabinet art personally.
9.460/10
5 months ago
BTL

Sometimes I don't really care for the difference between the LE and the premium but the art package on the LE is just so much better on this game than it is the premium. The only thing that I can say about the LE artwork that would be considered a negative is that I would rather see the artwork from the pro translite on the backglass. The game itself is a blast and has plenty of drop targets which I like and the snit shot is one of the most satisfying in pinball. All metal ramps, unique layout, and a fun ruleset make for a great game.
6.965/10
6 months ago
KIP

I wanted and owned this game... however, it only lasted 3 months. I was very disappointed as I had only played on location a few times. The Katana Blade is cool... loading balls in it is the highlight of the playfield.. The shot left of the scoop is completely wasted. The sound and music is simple and repetitive. The game modes taking on the enemies of DP is cool. The mini Deadpool is ok but leaves you wanting more form the drop target ball lock. It was ok but no way a long time keeper for me. I like Deadpool and Avenger characters, but something just failed on this game design for me.
10.000/10
6 months ago
JP

Best machine I own. Loads of fun and very well made. Has 10k plays from being on location but you'd never know it. Katana shot is awesome, and the art package is stunning. Disco ball is super cool

The game’s theme is great, we are huge Deadpool fans and this machine did not disappoint.
I haven’t fully grasped all of the rules and have not come up with a good strategy on getting high points after played over a dozen times but it has not gotten old at all and I do love figuring it out.
7.795/10
8 months ago
BRI

Great table concept that is absolutely ruined by poor voice acting. It's not just that this guy is not Ryan Reynolds. It's that his work and the lines are so phoned in, it destroys what would otherwise be an EXCELLENT table.

The good: I LOVE THESE GAME RULES! The idea of setting up fights is great. The 16-bit era display animations are 10/10. When you're in a fight, it's clear what you need to do - and there's a straightforward way to do it. The ideas behind scoring are some of my favorite in a table.

But, they also included some of the worst, most annoying characters in the Deadpool universe. Why is Baby Deadpool in this game this much?!?! The jokes just aren't Deadpool quality either. Every single line in a game like Star Trek TNG is memorable. The lines here are just mildly amusing.

If they'd spent more time on the sound design, this could've been a true classic.

This game is the best game to get people in to pinball. Rules are easy to understand. Call outs are hilarious. Great flow and all around fun game…however…super easy to beat and once you’ve beaten it a few times…very low replay value…regardless…one of my absolute favorites.

Hipponotic has owned this game in the past.

Great gameplay with simple rules that are easily understood by family and friends, fantastic artwork, hilarious callouts and superb original music. The ruleset is a beautiful retro fighter throwback for an arcade player like me, it fits the theme perfectly. It's not superflowy and can be slightly clunky but this pin is just pure and unadulterated fun. I love it so much that I sold my Pro and traveled across half of Europe to pick up an LE. I just don't get bored of this game, for me this is a masterpiece and a keeper. This one has it all, the art, the gameplay, the music (disco/funk/soul/hiphop) and the callouts - I plan to get buried in it.

Was skeptical about the theme and machine until I played it. I think the comic book approach turn out superior to the theoretical movie option. I’m a fan of the movies and have never read the comics. This machine is simply fun. The animations could be better but are deliberately retro. The shots are satisfying. The katana shot is awesome. This is a solid addition to my lineup.

best stern game ever made. i wish it was based on the movie its really the only complaint. This is an amazing game.

It’s a fun game and well built game but it was actually the Stern that made me realize that Stern is starting to feel repetitive and jamming too much onto the playfield. I think the kitana is very unique but the battle mission concept felt repetitive.
9.440/10
12 months ago
KEV

My first LE, really enjoyed this game. It is on the "easier" side of Stern games I've owned, but ultimately the fun factor really drives the score for me. Zombie Yeti does fantastic art, the callouts are the funniest in any pinball I've ever owned and the variety on them is really great. Just a solid solid effort by Stern on this one with some really unique shots, Katana and Snikt shots are extremely satisfying and the left orbit on the Premium/LE is great... and a disco ball??? Come on, this game has it all.

Theme does nothing for me.
Anyway, this game is really fun to play and quite simple to understand. Great flow. I like humour too.
Not really a fan of lcd animations, could have been better imho.

colonel_caverne has owned this game in the past.

Man. This pin is incredible to me; it is my favorite pin after all. The artwork is awesome and the gameplay is great to. Overall I think this is the best game and will be a classic game in the years to come.

Nice shooter all around. For me, the animations and sound are horrible. theme integration is very good. flow in this game is great with the ocassional stop and go every time you get the ball in the scoop. The L.E. Looks is probably the best of all of them but the video on this game just feels like it was never completed aside from the "street fighter looking sets", the rest is just ok. The katana lock ball shot is probably the best shot in the game.

It was fun, but for some reason not one that kept me at it. I had machine tweaked just right. Shnikt shot was perfect. Love the Katana lock, I can’t put my finger on it. Art package was not to my liking on the LE. Cabinet just looked stupid in my opinion. Not great use of the LCD say compared to BKLE. Think I would have preferred it themed after the movie and not the comic. I know it’s meant to be cheesy but this was a bit too cheesy for me.

Fun game to play. I gravitate toward this game more than others. The animation are growing on me. I hate it at first but it fits the game well

When I initially got this game, I thought it would be bolted to the floor for year. Awesome integration, good flow, and I personally liked the humor. But after the first or second week, I beat it. Then I beat it again, and again, and yet again... After a couple of months, I let it go. I don't play a lot of pinball, and also I'm not a competitive player, so if I can get through a game that quickly, it usually doesn't stick around. Aside from the code maybe being a bit thin, the game is brilliant in so many other ways. Definitely a super fun game to shoot.

* Adding this as I now see that Deadpool is #3 on the Pinside list which is ridiculous. The game is fun, but there are 20-30 games that are significantly better than it.

I wish this was based on the Ryan Reynolds Movie pin, not the comic. Reynolds callouts would have matched the excellent game play so much better. Instead of that paying that licensing fee, it is clear Stern spent the money on the PF and this is a good trade off. The pin is packed with a lot of features. 3 banks of drop targets, 2 spinners, the Katana Sword, stand up targets Hell House scoop and more. The LE adds more drop banks instead of the stand-ups, an extra control gate, an up/down ramp in the shooter lane, the disco ball, some toys and premium sound over the pro.
6.068/10
1 year ago
???

After hearing all the hype about t his game, I finally got a chance to own one. I gotta say, it seems like I was in the same 5 fights over and over and over. It's just so repetitive. I don't enjoy the low end graphics and the call outs aren't anything special. This game is overrated. I don't love the theme; maybe if I did I'd like it better, but I doubt it.

Next1234
There are 78 ratings (that include a comment) on this game. Currently showing results page 1 of 4.