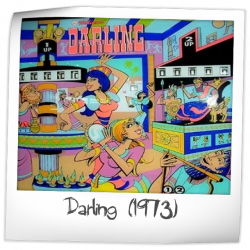 A very dull game. I think it very funny that Darling ranks so low on the Pinside list when it was the machine the cool kids played exclusively in my '70s arcade.
4.144/10
1 year ago
???

Darling has an interesting playfield, particularly the center Looping Ball Special, you have to hit the pinballs direct to score points.. I initially thought the balls would be released but they don't. The two pockets located to the sides of the flippers are also interesting.. The game play itself is very sparse and simple.. I know a lot of people rate this game poorly, however i have yet to find a pinball game i didn't like. Darling isn't a bad game, it's kinda bare and if it had a few more items in the playfield this would actually be really fun game.. I still like this game and I rate it very average.. But average is ok too...
6.691/10
5 years ago
JRS

great if you want the cheapest EM possible. Good also for new owners.. makes for good practice. All large scores heavily based on bonus. After 5 months owner ship, easy to flip on the 5 ball setting. the gigantic captured ball feature is usually to difficult to deal with and takes up a ton of real estate, but the game as a whole isnice to hear and look at. Not as nice to play... Least favorite game in the collection. tops out at $500 fully shopped and LEDded.

jstree has owned this game in the past.

When I first saw Darling, I thought it was a cool looking game. Not much going on on the playfield, but the five captive balls looked intriguing! I grabbed it, hurried home, set it up, and started playing it.

The novelty wore off fast. This game looks cool, and could be cool as a head-to-head battle or something, but in a single player game - forget it!

Not that I spent a lot of money on Darling, but right now it's my most expensive parts game... :(