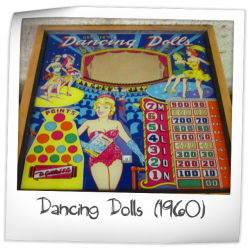 I altered my comments as I realized I had failed to address anything in the game. It's a fun playing game, and Gottlieb games of the period are apparently tanks as this game is still going 60 years later. Some of the visitors to my home have suggested I plug up the gobble hole, but that hole is what makes the game. The game has six pop bumpers. I'm sure there are other games with this many or maybe even more, but this is the most I have ever seen personally on a game. And those pop bumpers with their placement can really get the ball whacking back and forth quite quickly and for extended periods (and points).

A plus also with the games of that time period is you can create your own multi-ball by simply feeding and shooting more balls into play. Of course, the game will end sooner, and the mechanical scoring will have difficulty in keeping up.

I've had this game for 46 years, and as far as I am concerned, it always has a place in my home.

Gorgeous old game, nice show girls theme with ingenious backbox animation. Like all vintage titles, needs rebuilt pops and flippers to play as it was designed, and play well.

Beautiful game! This is the game that expanded my pinball horizons. I was mostly a 70's Gtb drop target guy until I played this game. Now I have an appreciation for the finer things in life...Woodrails! Unique back box animation and a lot of nudging sums up this one for me. Land in the kick outs to light the 100k pops, try to keep the ball up top...and avoid the gobble hole. 2" flipper play has it's own nuances, which is addicting, and adds a great variety to a 'newer' collection of Em's. Last use of bulb scoring for Gtb...which makes this game even more significant. Interesting note: 'Game Over' is printed on the back of the backglass, but there is no socket in the head to illuminate it. Supposedly the animation took up too much real estate. When the 'match' star lights up...Game Over!

after further review...this game is tough tough tough. Fun, but tough. I have my posts set liberal, and replays set at 6m + and 30 points +. Tilt disabled. And I still get a 2m average score. I'm not a bad player. This game will kill you 5 times before you hit the ground. If you like punishment in the form of pinball, buy one. Make sure you put a more 'giving' pin next to it though so you don't go crazy. Do I sound crazy? I think I am going crazy. 50+ plays with only one replay won.....sheesh.

presqueisle edited previous rating on May 07, 2015.
presqueisle has owned this game in the past.

This is a fun machine to play, not much of a rule set, but plays fast if set up properly. The gobble hole always seems to get you just as you light the high value pops and lanes, I own one so maybe I am a bit biased. Play it, you will like it.

Played this at a few shows. Sort of meh. The backbox animation is the highlight of the game. Beyond that, not a big draw.
1
There are 5 ratings (that include a comment) on this game. Currently showing results page 1 of 1.