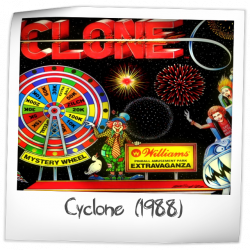 There are 132 ratings (that include a comment) on this game.
Currently showing results page 1 of 6.

Some great simple mechs. that are still fun today , Python art package , amusement park theme a decent all around game
8.212/10
4 months ago
ALX

One of the best games from this era. A theme that will last for decades. The cabinets art is amazing and the sounds in the game are truly funny. A really great Williams 11-game.

Razze79 has owned this game in the past.

Played this game a ton in college with friends at our local bar. Very fun, addictive game play, and a unique layout that perfectly suits the theme. I don't particularly feel that it is lacking by having no multi-ball feature. Not sure that adding multi-ball for multi-balls' sake or having 3 balls triples the fun. Sure, it may seem simple by today's standards, but a great pinball for the era. I still cringe at the sound of those elephants though.

robmeans has this game on the wishlist.

Kind of ho-hum early Python Angelo machine. Some unique features such as the ferris wheel in back left corner give the game a little bit of fun. And the playfield artwork does warrant stopping play for a while to explore in detail. But the game it's self lacks the kind of splashy panache that would be the hallmark of later Python games. I'll give it some credit. It's not a terrible game but nor is it terribly compelling.
8.758/10
11 months ago
MJL

The first time I played this game was years ago at my girlfriends house. Add 12 years, a marriage, and a lot of hours behind the flippers and I can attest that this is a very fun and lasting machine! Throughout the years I have played this game probably 1000 times, every time is just as fun and challenging!

Not knowing much about pinball machines, by no means an expert, I have learned a lot about mechanics and playability of machines thru this game. The amount of different bonuses, mixed with fun thematic elements, allows you to play this game LITERALLY for hours! All in all, a fun game that you can flip on and play without thinking too much about strategy, pure enjoyment.
7.149/10
1 year ago
XL

Not a bad pinball for sure but overated. This gets the best rank in my collection, it's also the one that cost me the most and I barely play it... Not a keeper I guess.

There are some great pins that came out in the late 80s and this is certainly one of them. I love this layout, as it had a nice variety of shots. Nice sounds and lights. I dig the ferris wheel shot. Theme is cool, but the playfield art is so-so. I don't need to own one, but I love to play it when I come across it.
7.871/10
1 year ago
DEM

I love both Comet and Cyclone. Fun theming, good sound, and variety of shots always make for a fun experience. Both have interesting play field gimmicks with Comet edging out it's younger brother, in my opinion, by variety. Cyclone plays a little cleaner than its older brother. I'd have a hard time picking between the two for a purchase.

I have one major problem with Cyclone: the strobe. The right hand strobe combined with the other lighting effects can wind up giving me a headache.

Brutilus edited previous rating on January 31, 2019.
Brutilus has this game on the wishlist.

Cyclone is a really fun game!

The layout is fairly basic, but it works really well. Waiting for the ball to ride the Ferris Wheel can get a little cumbersome at times, but that's really my only complaint. No multi ball in this game, but it doesn't really hurt it either in my opinion. Nailing that Comet ramp over and over for the "Million" shot, or the Cyclone ramp 3 times for the Gate Bonus (Jackpot) in a certain amount of time is the main goal. I also like the skill shot in this game.

What really attracts me to this game is the music/sounds and the art. It's really a work of art, with such detail given to the individual people on the playfield. The music is catchy and fits the theme well, and the lights/flashers work great in this game.

This is definitely a game worth playing for a bit. It can get old since there aren't a ton of things to shoot for, but it is a really fun game to play a few games of from time to time.

The artwork is fantastic! As good as it gets. Not a fast paced game. The call-outs are great! Coney Island theme is used to perfection. It's a fun game to play without overly challenging shots.

Overall pretty good for its time, no multi ball but probably the best non multi ball out there. Plastic ramps block quite a bit but they are clear. We enjoy wire ramps better but still a good pin

Good looking game but it seems like there isn't enough to do. Seems like you would get bored fast. Ferris wheel and spinning mystery wheel is cool but not a game I would own.

This is the game that attracted me to pinball. Very fun and a true piece of nostalgic art with the Regans in the back glass. No other single ball game is this much fun to play. Very nice to have game prompt you to make different shots.

dzrossi edited previous rating on March 13, 2018.
dzrossi has owned this game in the past.

I was surprised I actually enjoyed this one. Not as deep as other newer games, but what do you expect. Fun ramps and shots. Definitely would sink some money into one on location
7.366/10
2 years ago
PFL

I put this one as a middle of the road machine. Easy to get a replay on it, so that helps a lot when you are playing it out somewhere. I seem to be able to put a quarter in this and play for 20 minutes on a regular basis. That being said, there is nothing super flashy about it. Has a ramp, has extra balls, has some mini games in it that are fun once you figure out what you are to do. I still play it when I see it, so it is worth a try!

PeoriaFalcon has this game on the wishlist.

Cyclone is among my favorites. The amusement park theme and ramps are done well. It is also super easy to understand. Challenging, yet comprehendable.
7.447/10
3 years ago
???

Had it in the dorm at my college. The first pin I fell in love with. Time has not been kind. Lack of multi ball holds it back. Wait time on the ferris wheel is sometimes painful. The arcade I go to has one but I rarely play more than 1 game before moving on
7.704/10
3 years ago
MAT

Cyclone is a dastardly game. The game basically consists of lots of timed shots. Shoot the comet five times in a row before it times out, shoot the cyclone 3 times, shoot the ferris wheel, etc. Then get double scores with the thru lanes which also times out. So you’re always under time pressure to make your next shot and if you’re a bit off you discover how mean and nasty those outlanes are !
Cyclone has a truly great layout. It is an excellent fan layout without being forced to put the pop bumpers in the back right corner like many other fans, but has them front and center in front of the lanes so they keep the ball action lively.
For points the most important shots are repeatedly hitting the Comet or Cyclone ramps. The million shot on the Comet gets even more exciting if you can complete all the thru-lanes for double scoring and then make the 5 consecutive Comet ramp shots in the seconds remaining to get 2 Mio. The Cyclone needs only 3 shots to get the gate bonus, but the ball is returned to the opposite flipper so you need to transfer which is not always easy.
The ferris wheel – this is such a cool toy and very satisfying to shoot for – doesn’t yield many points – just maybe if the points have built up (from the pop bumpers) and you have double score active. Cyclone has an excellent skill shot – one of the best – all about pulling the shooter rod just the right distance back – five holes in succession, try to hit the middle one. The sinkhole at Dracula’s house (shot right in the middle of the playfield behind the drop target) is fun to shoot, but the rotating spinner on the backglass (a great innovation) gives such low point values there’s not much point – usually one of the first 3-4 hits to the house yields an extra ball so this is the only reason to go for this target – but if you miss, the outlane can be the punishment. The bonus multiplier scoop on the left side is fun to shoot (3 or 4 hits gets you a replay), but at least on my game you’re never sure where the ball shoots out – sometimes I can deflect it with the left flipper and sometimes not (reminds me a bit of Whitewater – also a mean scoop).
Sometimes I think Cyclone would have profited by a multiball mode. This along with the two ramp bonuses would have made this a really great game. But the great layout, the great light show and the number of satisfying shots still makes this a pretty darn good game.

One of my favorites. Growing up in the 80's I played this non-stop across the street from my house at Armondo's pizza. This game never got old. Esp for 1988 it was a fun game, great great artwork on the cabinet, backglass and playfield. A true classic and in my top 10.

I know people tend to bash Cyclone for limited shots but you have to put these older games in perspective of the era they were made... In the 80's this thing was amazing and certainly captivated my attention on a daily basis.. which is exactly what the designers intended! Many quarters were dropped into this game when I was a kid.. Update to a tasteful LED upgrade and this machine POPS. I can look at the backglass all night - its a work of art.

chriswhitey edited previous rating on December 14, 2017.
chriswhitey has this game on the wishlist.

This game is seriously shallow, I have no idea why it rates so highly, maybe nostalgia.

I can't even comprehend how ugly the PF is. Grey background with spots (people). That alone is enough to never stand in the presence of it. Oh my god just gouge out my eyes already.

Next123456
There are 132 ratings (that include a comment) on this game. Currently showing results page 1 of 6.