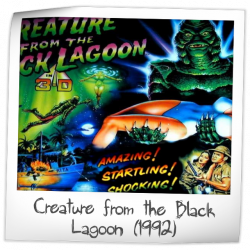 There are 407 ratings (that include a comment) on this game.
Currently showing results page 16 of 17.

I love the look of this machine, that is the reason why I purchased it originally.....however the gameplay leaves something to be desired. I was mildly surprised that it is ranked as high as it is. The Creature is definitely in my top 5 all time favorites for appearance (It can be anywhere from 1-5, it's hard to pick my top five in order!) I love the 50's theme and artwork on this game. I find it easy to play but it feels like I'm doing the same thing over and over....just a never ending game of shooting the ball up ramps. The creators should have done something better than the Hologram of the creature, while the intentions were good the result is rather poor and what I feel to be one of the weaker parts of the game. I do not like the music and sound effects at all with the exception of the when the Creature shows up. If you are looking for a machine to look good in your home, I strongly recommend this pinball, but if you are looking for gameplay in this price range there are better choices.

best music to play pinball too

brettj49 has owned this game in the past.

I love a good schlocky pin. If you can find the right theme and pull it off no-one can beat it. This one takes 50's drive-in theatre and the greatest drive-in thriller and takes them there. The game is fun to; you almost feel like you're parking cars in a red hat.
9.913/10
11 years ago
???

TheNJGamer has this game on the wishlist.

What's not to love here? Well there are a few things actually.The playfield is a little crowded and some targets are a little hidden. Other than that you get a great theme , a lovely backglass art, some great 50's music that puts you in the groove , humor and an addictive and challenging gameplay that gets you hooked for life. The two ball multiball is lacking ,but the variety of shots ,the balanced difficulty the timed skill shots and even some limited but addictive flow when shooting the ramps as well as the overall FUN of the gameplay more than compensates. A top 20 pin for sure in my ( and many other) books. Hit the snack bar!

it is not fun. I had one and sold it quickly. sat in my games room unplayed for a year after selling. Whats with the drive in theme? should have stuck with the creature. Hologram is a source of problems and is not that great.
8.960/10
11 years ago
MBS

Pinbot60 has owned this game in the past.

A fun game and a theme that appeals to many. Multiball is the main focus and fortunately is a solid mode with more to do than just hit a jackpot shot (increase multiplier, movie madness, monster madness). Move your car and the video mode are perfect for the theme and fun.
Very challenging as well, I still have never gotten the super jackpot.
However, there are a lot of 'modes' that are simple time based modes where you gets alot of points for hitting a ramp or target (unlimited mil, big mil, intermission time). They just seem so uninspired compared to the modes that shine well with the theme.
The sound and playfield art is solid - very fun to just look at it sometimes.
Overall, you have to like stop and go games to really enjoy this over a long period of time - I did get bored with it being my only pin after about a year. But even with that, I will probably never sell it.

Still the hardest total game I've played yet, not my all time favorite but super tough!

peraphs not the deepest rule pinball but a lot of fun and humor...for its period the ologram was a beautiful toy and mechanism...the more i play the more i like this pin...
take it in your collection if you have the possibility..
a very good jump in the past in the 60's drive in...A++

Love the artwork on the playfield and the backglass. Love trying for super jackpot.

Zadom edited previous rating on November 10, 2015.
Zadom has owned this game in the past.

John Trudeau's best game. Instead of basing the pin around the movie plot, Dr. Flash decided to theme the game around a 1950's drive-in premiering the Creature movie. Gill-man reaches through the movie screen & makes off with your girl. Easy to understand rules for novices. Show-stopping 3D Creature hologram, incredible ramps, good flow, solid art, light show, licensed 50's music, & an intense multiball. Kissing-couple & other sound bytes are hysterical. Snack Bar "cucaracha" & Pac-Man "Snack Attack" music will make you laugh. Tons of entertaining DMD animations. "Move your Car" allows you to advance a scene of an angry drive-in patron, on his mission to destroy the van blocking his view, by all means necessary. He ultimately pilots a fighter plane & levels the drive-in with a nuke, only to have the van simply drive home. The "Peeping Tom" video mode fight sequence is also hilarious. Gladiator music plays while you swing your fists at a pervert ala Mike Tyson's Punch-Out (finish him off with a "Fatality" like in Mortal Kombat). Fairly difficult game. Large gap in the center drain, along with SDTM drains via failed shots, balances out a light ruleset.

drbond edited previous rating on August 24, 2012.
drbond has owned this game in the past.

I tried to like this machine being that it is the predecessor to the awesome Monster Bash, but it just didn't do it for me. The play wasn't smooth enough and I just didn't enjoy the mixed theme. They should have gone full monster and left the 50's drive-in aspect out in my opinion.

Bottom line...this is an alright game, but I don't plan to go back to play it anytime soon considering the other options out there.

What a fantastic pin!One of the best looking tables ever made. The art and lighting is really well done and the translite is in keeping with the film.
The playfield art is also well done i love the swimming beauty and the creature draped over the tear dropped shaped window where a lit moving hologram of the creature lurks.The likeness of the swimming beauty could be better Kay was never blonde or muscular.
It has a simple rule set that is very fun and addictive,nice flowing shots up all 3 lanes and the 3 ramps.The ball speed could be a little faster but the slower speed makes the game very methodical and precise.The 2 ball multiball is very difficult to keep going and would not have worked if the designer had gone for more.The multiball SUPER JACKPOT takes some doing i have only got it 3 or 4 times out of 200+ games but that may just be me being rubbish!

All in all one of the best pins i have ever played and it well deserves the top ranking it has. "YOU SAVED ME! YOUR MY HERO!!

When i first played CFTBL it didn't impress me. Then i bought one a couple of years later and totally restored it. Now i can't leave it alone. There are so many things to do and it is hard to get them done since it's a bit of a drainer. It's very challenging which is what keeps me coming back for more.

I really like the theme of this pin. It draws you in and it always manages to put a smile on my face. I think their could be improvements on the playfield and if your going to have a cool hologram feature please make sure that it is dependable. I know a lot of these machines don't have that working correctly. I love the dot matrix cut sequences. Music is fun I just was not crazy about how everything flowed together on this one. The gameplay was just lacking for me.

the more you play this the more you appreciate how good it really is. will become even more collectable in the future.

vex edited previous rating on August 29, 2009.
vex has owned this game in the past.

I just found this in a hamburger joint next to a Monster Bash. Needless to say, I play monster bash a lot more. That said this is a fun game. The spinning cup next to the right flipper is a fun/unique distraction and gives you a moment to set up your next shot.
Theme is just ok but play is great and keeps you coming back. I'm talking myself into giving this another chance. Maybe next time out I will tear myself away from monster bash.
6.185/10
12 years ago
AL

Looks great but ultimately a boring pinball machine. The cool ramp and whirlpool are almost never used. Save some money and buy one that does not go and just look at it!

That's very nice game,drop ball,only 2 balls multiball and when you play with this game you have to pitch the ball at the bottom because that's a drain ball and for the price asking for this game?,no more for me.Ihate only 2 game pinbot and creature from the black lagoon
PreviousNext1 ... 7891011121314151617
There are 407 ratings (that include a comment) on this game. Currently showing results page 16 of 17.