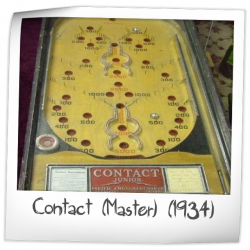 Taken From "They Created Worlds: The Story of People and Companies that Shaped the Video Game Industry" Volume I: 1971 - 1982

- With the failure of Advance, Williams entered a period of financial difficulty and felt that he needed to create something particularly innovative to survive in the coin-op business. After contemplating the problem for some time, he finally had a eureka moment when he decided that the ball should have more “action” and that he should use electro-magnets to provide it. The game Williams crafted around this idea, called Contact, used a device called a solenoid, a coil with a magnet inside that creates opposing magnetic fields when energized with electricity, to kick the ball back onto the playfield once it entered a scoring hole, giving the player an opportunity to score more points. Williams used dry cell batteries to power his game and created a large cabinet that stood on its own legs rather than resting on a countertop, both uncommon features that would soon became standard in the industry. To manufacture the game, Williams turned to a former carburetor manufacture named Fred McClellan who had recently entered the pin game business through a new venture called Pacific Amusements. The game proved successful almost immediately, leading to constant sales calls and an idea for a practical joke. With McClellan’s phone ringing all the time as new orders came in, someone in the showroom decided it would be funny to hook up an electric doorbell to one of the solenoids in one unit so that when the ball was ejected back onto the playfield a bell that sounded just like McClellelan’s telephone would ring and he would rush to answer it. The bell proved to be an excellent attraction feature and became a standard component on the increasingly popular game. Originally able to only produce about ten units of Contact a day, Pacific Amusement opened a new Chicago plant in Spring 1934 and eventually sold over 23,000 units priced at $75.00 each. While Contact was not the first pin game to include electricity, playfield action, a tilt mechanism, or sound effects, no other game had included all of these features in one package. Contact, quite simply, redefined the game.

Alexander Smith, "They Created Worlds: The Story of People and Companies that Shaped the Video Game Industry" Volume I: 1971 - 1982,

There are no forum topics linked to this game,