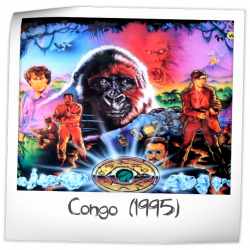 There are 164 ratings (that include a comment) on this game.
Currently showing results page 3 of 7.

Played it on different locations...had to buy it :-)

dahlman has owned this game in the past.

Congo is an extremely fun game- my parents owned one throughout my childhood and I've played hundreds of games on it without getting bored. I can see why prices have skyrocketed into the 5k range now! With a good mix of video modes and different shots to hit, it can be a very complex game to play that is easy for a beginner to get into, yet leaves a lot for even the pros to come back to over time. The pop bumpers are exceptionally good in this game, the super skill shot is relatively unique, and the volcano shot and the lower playfield are very well done.
8.603/10
3 years ago
DEV

Admittedly, I have only played this pin a couple different occasions but it is another pin where I don't understand the high rating.

The movie was bad and the pin seems only marginally better.

Really like this game, which was unexpected. The look of the game is great and the play is fun.

Congo is a great game! Also one of my favorite movies. The game really does a nice job integrating the theme with the art, DMD animations, and toys. The sounds are amazing; even better with a subwoofer installed. I like that it doesn't necessarily have "modes", but hidden tasks that get unlocked as you advance through the game. Because of this, I don't really know how far i've actually gotten in the game. I'm still discovering new things. I had no idea there was a "super" skill shot to the kickback! Very cool.

I have an excellent example of this pin, and have owned it for some time now. This pin is very underrated imo, and it's one of the pins that consistently receives the most attention from friends and family. It has some of the most unique shots in pinball, including the challenging volcano ramp, which is extremely satisfying when you hit it. It has that 'just one more' appeal to it as well.

I really enjoy this pin and think it could be ranked higher than, say ACDC. Lovely execution on the theme for the era. Video modes are fun enough that I find myself going for them hoping to get to play, as opposed to other pins where a player might play the video mode begrudgingly.
Caveat: the example I put my 30 or so games on did not seem to have a working lower-playfield, nothwithstanding the fact that I scored 1,400,000,000 and took the GC spot...maybe my moderately good game is why I like the pin so much?!

wtuttle has this game on the wishlist.

Its been said a bunch of times, yes the movie was meh, but the pin is fun to play. That is what I look for first and foremost. I don't need it too impossible, or too busy that you can't get all of the shots. This game has a good flow, easy play for all skill sets, and I like the smart and funny banter from the characters (Ernie Hudson and Tim Curry) actual voices.

STLBUGMAN has owned this game in the past.

It has a giant monkey! I should love it! But I don't.... just doesn't flow. And the randomness of cave exploring makes me angry every time. Blea. Pass.

bitternerd has owned this game in the past.

I haven't seen he movie since it first came out, and based on the ratings that's a good thing. I can just enjoy the machine as a jungle adventure. I do agree with other reviewers that the lower playfield is a bit of a gimmick. Having said that, at worst, it's a change of pace like a video mode. Plus, being under the playfield it doesn't get in the way of any of the great shots. The best "toy" on the machine is probably the volcano. Having the balls shoot out of a volcano to start multiball is entertaining. Shooting the volcano ramp through the pops is also a rewarding shot.

lpeters82 edited previous rating on May 11, 2020.
lpeters82 has this game on the wishlist.

This is a very polarizing game when it comes to collectors, whether they have a preference to WPC or not.
Overall, gameplay is actually quite good, and has decent flow.
The game is FUN on game action and modes.
Artwork is well above average.
Backglass is average.
Ruleset is above average.
Ramp shots are good.
Difficulty is well BELOW average.
Callouts are very annoying, especially "Amy" being screamed at the most inappropriate times and does not always make a lot of sense.
Music is movie centric.
The game does have a few "achilles heels", notably the volcano VUK, associated plastics, and mini playfield gorilla kicker, but nothing that is insurmountable in a home environment.

Up until around 2010, nobody really cared about this title, and there are reasons.
Current collectors seem to be flocking to the game, think because is is "rare" it is "valuable".
You might want to actually PLAY the game, before buying it, which can be a little difficult I realize based on production numbers.
This is a game you REALLY need to try first, instead of relying on "Top 10" lists based on new collectors.
Make a private assessment.

But, for new collectors that have to "own them all" like children owning He Man and "Master of the Universe" toys, the results are fairly predictable.
8.341/10
5 years ago
SAP

Congo is a fantastic game! I totally see why it was neglected for years and used to fetch a low price as the artwork and theme are pretty lame. That said, this game is a SOLID player! I love this game and would like to snag one someday for the right price!
8.116/10
5 years ago
???

one of the best william's pinball!I love the flow the gameplay !I'm still really enjoy to play with every time..
I'm fond of the midnignt madness very funny..

danske has owned this game in the past.

Congo.... you beautiful beast. You are a diamond in the rough.
Non linear game play. Fun shots. Great sounds and call outs. The Volcano. So many reasons to love this game. It's a hard title to find in good condition but there are repro parts available.
Haters can nay say all they want. This game holds its own with any other pin and then some. It's a perfect compliment to the classic fan layouts and typical pinball conventions of modern based conquest.

Had the opportunity to buy a restored Congo with clearcoated playfield. Love, love, love this game. I owned this early in my exposure to pinball and miss this game tremendously. I remember when the movie was released, all the marketing, the art plastered on cups at Taco Bell. The movie is not an all time favorite but I did enjoy it. The themes, music and vibe really immerse you into game play. There is something to be sound for sound and call outs with any game and I love them on Congo. If you own one, don't make my same mistake and sell it. You will regret it. If you own a restored Congo and find yourself reading this, please reach out to me because I would love to own one again.

one of the most fun games to play,the playfield is amost perfect,i like the volcano shot.. i realy love playing this machine, damn it its good...keeper on play alone,the theme sucks, to bad this didnt have a better theme cause it would b a top 20 for sure,i dnt like the sound bites the movie was a good family movie but a pinball game, wasted a great machine on the theme here ...to to bad sorry amy !! not a keeper for me but wont pass up a oppertunity to play one
9.020/10
5 years ago
DEB

Love this game. Just fun shots. Love to hit the loop and combo the volcano. Big scores. Not the greatest theme but a great pin. It seems to have more lastability than a lot of the old B/W games. Fun but to9ugh video mode, easy to understand rules, etc. A winner.

Overall a nice pin - very cool multi-ball with volcano eruption.
But after getting the extra-ball by shooting sometimes the volcano-ramp everything is focused on the left side of the pin - no more need to shoot to the bumpers or the volcano ramp - the next extra-ball is too far away... The music is excellent but "the stupid comments and horrible voice from Amy killed me". That was the reason why I sold the pin again...
4.373/10
6 years ago
DJT

I just don't like this game. It is based on a very bad movie and the graphics and sounds reflect this movie. The lower playfield toy is a complete waste.

PreviousNext1234567
There are 164 ratings (that include a comment) on this game. Currently showing results page 3 of 7.