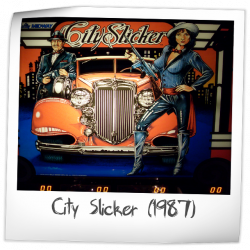 This game has received 8 approved Pinsider ratings. 22 more approved ratings are needed to get a rating and for it to be eligible for the Pinside Pinball Top 100 ranking.

Had an opportunity to play this game on location and found it to be very un appealing. Yes there were only 300 made and that's probably not a bad thing. I have played a few 6803 operating system games and they are very hit and miss. I think that this one is a miss and marked a low point in the Bally Midway life before being incorporated into Williams.
3.305/10
5 years ago
AGB

Don't want it, and I don't recommend wasting time on playing it unless you just can't pass up playing a low production game just for the notch. Maybe there is something more to the story about the game that would make me appreciate it more - but that appreciation would be at a far distance while I played a good game.

City Slicker is a game that seems to be trying way too hard to be pinball and something else at the same time.

The Good:
The Double captive ball bridge is really cool. The reflex mini flipper from the center saucer will keep you on your toes. The qualification for the bridge (uptown) is well done with the tic-tac rollovers doin' their Xenon thing. Nice shots to the orbits to the arch to the upper saucer.

The Bad:
The upper PF should play better than it does. Reflex flipper shots SDTM at high speed are random (as in... not in a good way) making any shot to the center saucer a bad idea. That and... there isn't anything else to shoot for in the center of the PF. This makes the deck feel dead. Really dead.

The Takeaway:
The story goes is that this design was originally intended to let the opposing player control parts of this game to be able to play head-to-head. On the same table? On linked tables? Who knows, what we have now is this version of the game and well... it's not that great of a game.

Update:
I just got a chance to play this game again. It's not getting any better. I mean, what is with the pop on the upper PF? Really? The lower PF does not play well and the orbits just aren't enough to save this design.