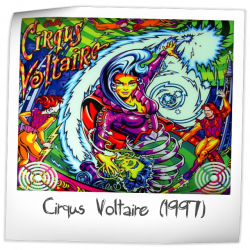 There are 347 ratings (that include a comment) on this game.
Currently showing results page 1 of 14.

a very strange pinball (theme and design)but packed with a lot of toys from an other time!
a good fun factor but rules are not very deep and the machine becomes a bit repetitive after a few days.
The one I owned was fit with purple backbox add-on which was very nice!
the playfield is a total beauty from the 90s .

stephflipp has owned this game in the past.

Great game. One of my best games from the last of the pinballs made in the 90's.

This is one of those games that I would like to own one day for all the wrong reasons.

It’s a game I know my family members who suck at pinball would enjoy when they come over to my house. I like the light show, the DMD animations and the shots mostly just the ringmaster though.

I also hate how one trick pony this is.
The ring master is so repetitive, it’s doesn’t change up the call outs. It could have been more like champions pub and had different voice actors or simply just increase the overall frustration in the tone of the ringmaster. It’s not asking too much.

I want to own this game, and maybe it would only last in my collection for a couple months. I really can’t see it sticking around. For less money you can get more bang for your buck. For instance, Roadshow is a fraction of the price and is twice the pin.
8.751/10
9 months ago
???

Finally added a CV and so far I have been pleasantly surprised. Totan is one of my fav pins, and CV feels like a quirky cousin to Totan. Some unique design features and mechs. It’s original, and innovative. It’s not super deep, but there is plenty to do. The music and callouts can get a bit repetitive, but maybe other ROMs or Pinsound exist. Great looking game, with the scrolls and lime green color this game will never be confused with any other. Ringmaster is a worthy focal point and main mech. Very interactive toy. A couple other multiball locks keep it interesting, with the high wire locks and juggler. The unique location of the dmd works very well, and frees up the backbox for a canon toy that launches a ball into a bell. Then the ball drops onto a spinning toy or possibly through a bonus switch. It’s a cute gimmick but isn’t super interactive. This is one of the most original pins and playfield designs from a great era. It’s not the masterpiece that totan is, or even as good as TOM, imho, but it’s not far behind.
I’m not sure it’s a long-term keeper, but it could be.

I love the theme and light and art on this table. Definitely sends a creepy, clown-like chill down my back. lol
7.652/10
1 year ago
VEE

My four year old loves Cirqus Voltaire on the Williams app. He loves hitting the ringmaster - he even repeats the callouts!

I was equally enamoured with the game when I first started playing online pinball, and even considered forking out the massive cost to make it our first machine. Having played one in real life, however, it’s nowhere near as impressive. The ringmaster isn’t as tempting a target and the playfield and shots, feel somehow limited and a bit incoherent. The floating ball takes up a lot of space, but doesn’t quite work, and - given the choice - I’d rather play another machine on-site.

That said: great theme, beautiful graphics and not the worst machine. I do think it’s possibly overrated and it’s certainly overpriced.
7.745/10
1 year ago
RSS

Fun pin to play, but one of the only games where the repetitive voice sounds get on my nerves after a while. The artwork colors are very bright, stand out, but not in a good way for me. It fits the modern circus theme well though and the dmd videos are exciting to watch. It may get a few games out of me but then I quickly step away for something else.
8.985/10
1 year ago
BTX

Probably one of my favorite pinball games ever made. Beautiful. Intuitive. Innovative. Real eye candy.

Wish I could afford to have this in my homepin collection.

Super fun game, if you can stay alive for awhile. I have many great and terrible games on this machine. I'm sure that's true on many pins, but this one sticks out for some reason. But, I still love this game. It's fun trying to get to the wizard mode, but of course there's a lot to do along the way. And it's fun just getting there. Some of my decent games feel so different than others. There's definitely a little variety here. You just have to give the game a chance.

SunburstWolfgang has this game on the wishlist.

Spent way too much money plunking quarters in this machine. Then it came out on Pinball Arcade for multiple consoles, computers, and phones. It’s not the same on a screen but it was acceptable and just made me want to play it for real again.
I almost bought one a couple years ago. The two things holding me back were the price and the female voice in the game, she sounds like a skank!
This is one of those machines that was overlooked in its day but became very popular for really no good reason other than rarity. Not that it isn’t a good game, it’s just not as good as many that are rated far below it on the Top 100.
Of course nowadays a game can be a top 10 so long as it’s selling the right popular licensed product. Gameplay has been supplanted by product placement, film clips, and vibrating motor gimmicks.
This game being rated so highly with no licensing, special edition remakes, or even enough popularity in its time to give most people any nostalgia whatsoever, puts a smile on my face. Perhaps it’s rated highly because it’s rare and collectible, but at least it isn’t at the bottom of the list because the latest ten versions of the Stranger Things-Rick and Morty-Avengers crossover ultra limited gold edition SE LE RX knocked it down the list.
I have played many of the new games in the top 100 and, although impressive and attractive, the gameplay isn’t quite good enough. Some blew my mind (Wizard of Oz), others look like a reskinned Stern Mustang Or AC/DC with different licensed music and art.
It was daring, even back when circus Voltaire came out, to create a unique game that didn’t feature a licensing deal. It’s unheard of today. For that, it deserves its rank on the top 100, even with it being a fun but repetitive and overpriced game.
I hate the amazing Rooney.
But if one came along at a reasonable price, I would buy it in a heartbeat.
8.984/10
1 year ago
MKH

This is perhaps the most beautiful pinball machine ever made. The outlines are KILLERS though.
10.000/10
1 year ago
KSM

One of the most beautiful machines ever made.the Ringmaster is very cool. Neon ramp is too cool.

This 90s classic remains to this day one of the most appealing, gorgeous and fun games to play! The below field construction is unique and purple has never been better employed on a machine. Endless fun. I wish I owned one and hope CGC will re-make it at some point.
9.140/10
1 year ago
RHS

A game packed with personality and ingenuity. It's designer may have fallen out of favour in recent years but his talent is undeniable. A beautiful game that stands out in any collection.

The Ring Master needed more quoutes though. I could've written hundreds of funny lines for the actor, but he only has a few lines that are repeated over and over, which makes the game less appealing after a while.

“The Greatest Pinball on Earth!”

You can see its wild colors from across the room, so you already know this striking game is a feast for the senses. The upgraded color display is nestled atop the playfield, leaving extra room in the backbox for the stunning artwork by Linda Deal (who also drew Theatre of Magic). We especially like games with an exciting multiball intro, and Cirqus Voltaire rivals The Addams Family’s “SHOWTIME!” for the dazzling sights and sounds leading to “Highwire Multiball.”

It may take extra time to uncover everything this machine has to offer but we think it’s worth it. And it’s a great game for practicing most of the “tech series” techniques we’ve posted around the room. Join the Cirqus!

A classic and fun pin! Love the use of the black glass as part of the game (sort of). Wish a modern pin did this! Like the bash toy and modes, but overall a solid pin, not a great one.

One of my absolute favorites! So strange where they placed the dmd though
9.480/10
1 year ago
CHO

It’s a fun game, and I love the rising ringmaster toy. I don’t care for the art, or the theme though, and that’s very important to me.

Beautiful artwork. The ringmaster is cool. I don’t care for the sideshow. The internal DMD is awesome feature. The back box is amazing piece of art but not super functional. I am happy to have one as part of my collection.
Next1234567891011... 14
There are 347 ratings (that include a comment) on this game. Currently showing results page 1 of 14.