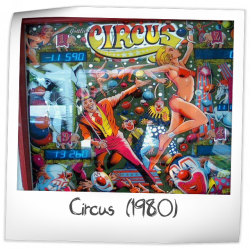 This game has received 11 approved Pinsider ratings. 14 more approved ratings are needed to get a rating and for it to be eligible for the Pinside Pinball Top 100 ranking.

The most fun of all of the system 80 games IMHO. Theme is solid with great sounds to tie the theme together.

This game gets boring quickly. The roto spinner adds nothing fun. The lower clown targets can cause your ball to drain quickly. And that annoying 8 bit video game continuous sound the game when you scores points. But the black glass looks nice.

I had a Genie and regretted selling it. I discovered this gem with a similar layout but it gets much less recognition since far fewer were made and there aren't enough ratings for this machine to be in Pinside's ranking list. Obviously, the main differences between this and Genie are found mostly on the left half of the playfield. Starting up top, a vari-target replaces Genie's row of drop targets. I like the strategy and randomness this brings to the game. Staying in the upper section to bash drop targets would be fine, but making sure you hurry the ball up there when the star is showing on the vari-target, without hitting one of the lanes that would cause the vari-target to spin the star to something less valuable? It's quite a nervous rush! Below that, Genie has a second set of lanes and a pop bumper whereas Circus is more open. Here I would probably prefer Genie's layout, but the saucer shot found on Circus is fine for something to shoot at down there. One main gripe I have with both machines is the weak spinner. It's not as fun to rip as a metal spinner found on Big Game, for instance. It takes just the right shot to get more than a few spins on it here.

Artwork on Circus is amazing. Yes, people are often creeped out by clowns, but these don't appear to be of the "It" variety. I enjoy just having the game on and looking at all of the designs and colorful happiness that takes me back to when I went to the circus as a kid.

The music ties in well with the pin. It's happy and the tunes played when certain in-game goals are achieved go well with the "WOOHOO!" feeling I get from making the shot I was looking to hit to finish the row of drop targets or something similar that awards a good bonus.

I'm still new at this game, but realize how important it is to have the flippers strong, be good at nudging, and keep the playfield waxed and set to 6.8-7.0 degrees to get the most speed out of the game. There's a lot of real estate and I can see how this game would be a drag if not set up properly. I think this super widebody pin is every bit as good as the highly ranked Bally/Stern widebodies of the 80's. I've already enjoyed it more than an Embryon I played last fall--but again, maybe that Embryon I played wasn't set up correctly.

Circus is in my opinion one of Gottliebs best wide body pins and also one of it's most overlooked. The artwork is outstanding. Sounds/music is some of the best the eighties pins offered. Playfield layout is challenging and varied, kickout, drop targets, spinner with upper and lower flippers. Simply a fun game that will bring you back again and again.

This is one of the TOP outstanding Gottlieb System 80 games.
The "Cirqus Voltaire" of the 1980s.
Challenging, beautiful, AND fun.
Playfield layout is outstanding with a multitude of different shots to practice and achieve.
Rotary target at the top left corner is the pinnacle of the scoring.
Backglass and playfield artwork is beautiful.
Cabinet artwork is average.
Ruleset, sounds, and background music is typical of the period, but not annoying not some early SS machines.
The machine is a fantastic partner for Gottlieb Genie.
The only real negative I can find about this game is its low production.
It is very rare now to find one it superb condition outside of a collector's home.
Trying to find a replacement backglass for the game title is an absolutely nightmare, because 99% are flaking, veining, cracking, or peeling. I am still looking for one in near perfect condition for my collection. So much mirroring on this glass...sigh...

Deserves to be remade.

Circus is the last game to feature a roto target, and it is used to good effect. Placement is great in an upper playfield area with its own two inch flippers.

Three three inch flippers at the bottom of the playfield help line up the shots, a 5x bonus multiplier with great drop target shots and a bonus collect saucer, standups and rollovers round out the gameplay.