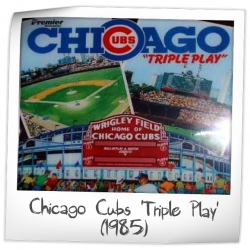 This game has received 7 approved Pinsider ratings. 23 more approved ratings are needed to get a rating and for it to be eligible for the Pinside Pinball Top 100 ranking.

1985 was a tough year for pinball in general, but it was also a continuation of a down hill ride for Gottlieb/Premier. Good games had been very few and far between for them since the the late 1970's. This game is an example of that. Bally and Williams had talking games, ramps and multi-level play fields, but none of these were evident on Chicago Cubs Triple Play. What it has going for it is mainly in the looks department. A simple but stunning looking cabinet and a superb back glass showing Wrigley Field, the marquee, an the scoreboard, make this machine a real looker. I first saw one in 2016 as they were very rare here on the West coast of Canada. I knew I wanted the machine and eventually obtained it. They are not cheap.
The play field looks ok but there is just not that much going on here. It really is a machine that seems like it's from the 1970's, yet has some 1980's touches like some of the bad 80's electronic sounds, which now is sort of retro cool, but nothing baseball related.
The rules are just ok as is the action.
I'll give it some more time to see if I want to keep this one. I love the look of it and so does everyone who sees it. The year I obtained it the Cubs won the series in one of the most entertaining game 7's I've ever seen. I am a huge baseball fan and love the Cubs and Wrigley, so that may mean I have to keep it. We shall see......it could've been so much more than it is.

Just not a game for me. Aside from the alpha-numeric display, this game looks and plays just like an EM. I can see a Cubs fan enjoying it as a collectors item, but the game was just really boring for me.

LilRocky has owned this game in the past.