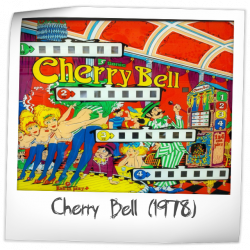 Cherry Bell is a game that I had never seen before until I got to Flipper McGill's in Idaho Springs, CO. (R.I.P.) Once I got into this game I was pleasantly rewarded with a great playing table.

The Pros:
The Artwork is perfect for the theme. Even the cab looks like it came out of an old vaudeville show. Fortunately, Sonic diamond plated their pf's in producction (THIS WAS 1978, HELLO... CALLING ALL BONEHEADS IN CHICAGO of days gone by!) and the detail of the artwork is pristine. Is it dave Christensen, no, but it's still looks great. The gameplay may seem sparse at first, but with a slick PF, the game moves much more quickly than one would originally expect. Get your double/triple bonus and collect. The 3 kickout holes in the center of the pf are not direct shots and require skill in deflection. The left orbit to the top and the collect bonus are narrow and satisfying. The look on the gentleman's face with the red suit and hat on the BG is f'n hilarious.

The Cons:
Find one if you can. Rules may be over-simple after a bit. Then again, this is a game from he 70's designed outside of Chicago with Williams parts.

The Takeaway:
A great game, if you find one that needs some love, restore it and you will be rewarded with a game that Williams best designers from the 70's would have liked to have called their own. All in all a damn fine pinball game.

Update:
Great news! Flipper McGill's is open once more! Playing this game again, I am reminded that it is very simple and very satisfying to play. The orbit shot on the left and the saucer on the right are both in the sweet spot of their respective flippers and are both very high up the PF. The 3 saucers in the middle of the PF require a soft touch or they ball comes right back atcha pretty quick. The right lanes are both on the way out and the left inlane has an opening to the outlane if the the ball comes up the rail fast enough. Flipper control is a must on this deck. The double bonus lane at the top is a must hit whenever possible on this deck. 100k from the saucer is way sweet! Gameplay comes down to the left orbit to build and the upper right saucer to collect bonus during gameplay. Simple and fun and very fast.

Caucasian2Step edited previous rating on May 26, 2013.

1
There are 1 rating (that include a comment) on this game. Currently showing results page 1 of 1.