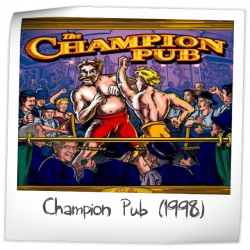 There are 176 ratings (that include a comment) on this game.
Currently showing results page 3 of 8.

Finally got to play a nice example of this game. Would like to spend more time with this game.
Seems pretty good. Seems like alot going on.

Time4akshun has owned this game in the past.

You need to punch not to think should be the perfect pinball :)

Nobrain has owned this game in the past.

It may not be a traditional pinball game but there is no denying that it's a lot of fun...although I haven't played it enough to say whether it gets old or not. It's definitely original! I like how they incorporated the ramps to deliver head shots.

Jsampel has this game on the wishlist.

I like the toys on the playfield, not comparabel with other pins. This is just something else, not the fastest flow but it has really nice toys. I like this pin a lot. Not the best pinball but very original game play.
7.734/10
4 years ago
SAP

Champion Pub: this is a tough game to review. While it's not a bad game, it's not a great game either. So much to do on it, but so little that's actually fun. Who wants to play jump rope in pinball?!

Not my most favorite pin, but definitely play it every time I see it at a friend's. I could take it or leave it, but at the price it currently fetches, I'm leaving it.
10.000/10
5 years ago
JRS

I will own this machine untill.I die

This game is absolutely spectacular. There is nothing else like it.

Amazing. The toys aren't gimmicks but actually vital to the experience. Seeing the boxer turn around for the first time to fight is an eye opening experience. It makes you wonder where pinball would be today if WMS didn't stop producing machines after this one.

The game is not easy. I have been playing it over and over and find it a challenge and I'm not someone new to pinball. I'm not a wizard or anything but I play quite a bit. It has plenty of modes to challenge anyone. Like anyone here has actually completed the Ultimate Challenge.

There are complaints about scoring regarding betting points later in the game. I can't even get to this point and neither can anyone else that has played my machine so what's the big deal? Plus, shouldn't you be rewarded with big points for making it that far?

The point ultimately being not only is there plenty of depth and challenge but it's FUN! This is the definition of a fun table. Casual observers want to play after seeing it in action. My entire family is hooked. This is the type of pin to get anyone to love pinball. It's just got that kind of wow factor and appeal. I can not think of any other game that elicits such a joyous reaction so quickly.

Once you factor in the rarity, the sound, the fun factor, the humor, the playfield, the art, the toys, and how easy it is to pick up yet how much depth there is Champion Pub is unrivaled. It is just so innovative and fun I wish the designers were able to keep things going.

It's never leaving my collection. If you can even find one, scoop it up before someone else jumps on it. It's brilliant.

I got allot of drains SDTM because of the punching bag. Cool game though, but not one that I would buy or own.
9.100/10
5 years ago
ALX

Artwork is beautiful and timeless. Great toys and lots to shoot for. Unique ramps add the gem of this game. A real beauty.

Champion Pub has some good concept work behind it, and it has some really neat toys and features. The jump rope, the speed bag, and the up post between the flippers (a nice homage to the EMs like Honey, etc. that employed this mech). I've found that Champion Pub can get a little repetitive after playing for awhile, but it has that "it's a kind of boring until it isn't" feel to it. When a fight starts or when the toys are activated, the game gets pretty exciting. It doesn't quite call me to it like the Sirens, but it is a fun once-in-a-while game. The vid mode with the spittoons is somewhat off the mark (but still thematically appropriate, I guess) and the angled short ramps can be more of a hindrance than an asset during most normal game play.

It's not high on my list, but I'd let it eat up some square footage if I got a decent price on it. Play it in the wild if you see it - it's worth checking out.

One of the best games i have played. The amount of toys and things to do on this game makes it a ton of fun. Artwork is good all around, great theme, and good shots

Champion Pub is a really tough game to rate, because it's full of gimmicks but they're really COOL gimmicks. The jumprope game is freaking awesome! Is it awesome the 15th time you play it though? Not really, at that point I just want to play some pinball. Even has playfield geometry has a neat gimmick where you can leave the ball at rest on the center post and take shots directly at the jabs.

I'm rating this on a pinball site though, and as pinball it's pretty mediocre. You're shooting at toys and mini-games for the most part, it's like Pinball Circus in here. It's very nearly at an Orbitor 1 level of "Only good for a LARGE collection".
10.000/10
5 years ago
PAL

This game is unique and awesome. It's always a challenge and the ability to become a stronger fighter is a super cool feature!
7.656/10
5 years ago
JAM

the toys are diffrent,pinching bag,jump rope and fight the boxer,great boxing theme,not the best flow but fun to play i dnt have over 30 plays on one but found that i do enjoy orher games more ,it is fun to beat up the boxer and i wish i could find one and play it more,the old lady liked it so i wanna say thumbs up,would i buy one probly not but wont pass up a chance to play one...nice game
5.712/10
5 years ago
GPS

This game seems underrated by many, but I love the theme and gameplay. Really fun! Not very deep otherwise, all focus is on fighting different brawlers from around the world. Could've expanded it a little more maybe because its kind of "narrow"

The playfield is VERY CLAUSTROPHOBIC.
Gameplay is very straightforward with "bash the boxer", but does have some strategy with scoring.
The use of an actual backglass (not the translite remake) makes the game unique.
Getting through all the boxers and "building up up your training" can make for some long games, especially with the video mode and other "game flow interruptions".

Low production for a reason, it tanked due to its release period at the end of the WMS/BLY final "second golden age" era. It ended with a slight overstock due to cost point...

Sound is excellent, music is repetitive.

Best suited for a LARGE collection of machines.
Hard to find NOS parts for everything.

VERY HEAVY machine, and needs tender loving care to keep running properly and be "dialed in".
Definitely not a pinball machine that lends itself to every type of player.

I really enjoy this game. I think the layout is decent and the toys are very clever. The shots do get a little boring as they mostly lead to toys or mini-games, but it is still great. Given the layout and features, it's not really a standard pinball machine. Like somebody else said, it's kind of more along the lines of an arcade machine than actual pinball machine.

I wouldn't want to own this as my only pin, as it does lose it's excitement after awhile, but it would be a great addition to a larger collection.
7.117/10
6 years ago
CDF

Pros:
-Probably the coolest toys in pinball
-Sound is good, and fits the theme
-The boxer is just such a great toy
-Theme is really well intigrated
-No, really, the toys.

Cons:
-Scoring gets horrendously unbalanced once you get good at it
-Not a whole lot to shoot for; most of the shots are the minigames/toys.
-At times feels more like an amusement machine or video game than a pin (because of toys and rules)
-Backglass is a bit garish

Overall a fun game that guests loves, but it wears out its welcome quickly. This is one I wish was on location nearby, as I would love to drop a couple quarters in a few times a year. I couldn't justify keeping it in even a moderate-size collection with 25 games set up, though.

Collin has owned this game in the past.

Some of the best toys in pinball. Brings a whole new meaning to "bash toy" The jump rope, speedbag and punching ramps are very innovative. You fight different characters as displayed on the DMD but the playfield toy is only one guy, can't knock it for this but it makes it feel a bit repetitive. Still a very clever game and theme plus toy integration is the main focus of the game instead of being too gimmicky.
8.080/10
6 years ago
AMK

This is one hell of a memorable table... who could forget a table with a punching bag in the center that rotates to reveal a fighter? This table has quite the rule set, and so it will take awhile to learn how to play (I'm still learning it). The gist of it is to train yourself and knock people out. Ways of training yourself include speed boxing and jump roping, both games that are played with the flippers. There is also a spitoon minigame that you play on screen. While I tend to dislike games that take me out of the "authentic pinball experience" for too long, I actually quite enjoy these aspects of Champion Pub. Another awesome aspect to this table is the skill shot, where you press and hold the plunger button until you let go to choose your desired bonus. While I'm pretty pitiful at this table (I can't make most shots on this table consistently for some reason), I think it's still a blast to play.
8.440/10
6 years ago
TSC

Very unique and executed perfectly... Reminds me a bit of mike tysons punch out... Only its a pinball machine! You train and you fight, all with the silver ball. Not another game like it!

Burp!
PreviousNext12345678
There are 176 ratings (that include a comment) on this game. Currently showing results page 3 of 8.